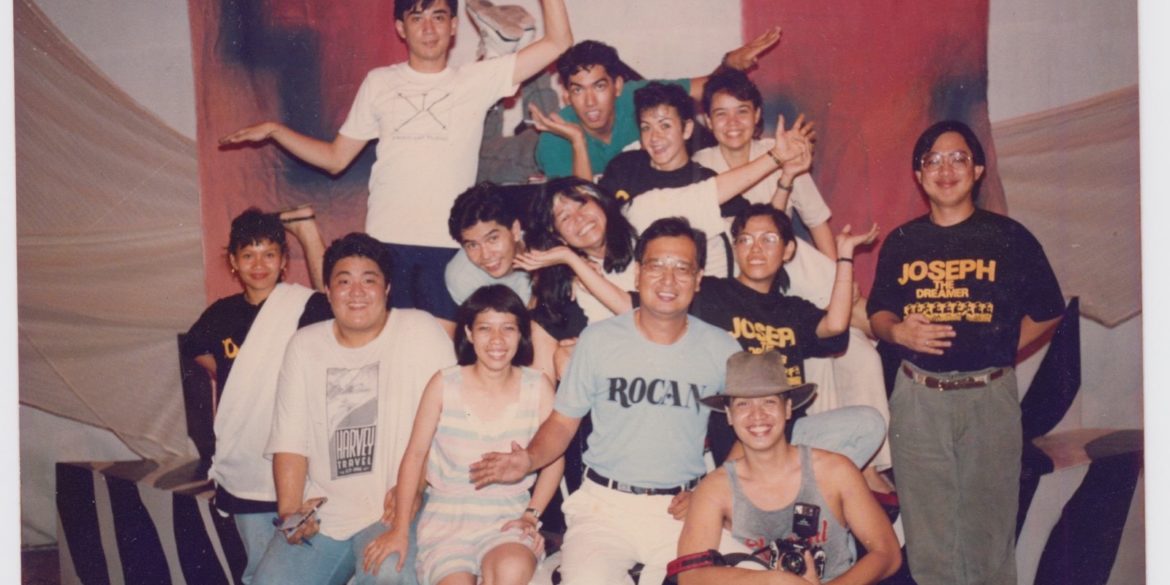 ‘Never Look Down!’—not even during a coup d’etat

“Joseph the Dreamer (JTD),” one of the country’s most successful shows with over a hundred performances of every imaginable size (including four arenas) in over two decades, has left a trail as victorious as it has been calamitous.

What was the determining factor of its appearances? Venue availability. Simple as that.

Yet for almost every set of shows scheduled, a calamity—some of them man-made—would always precede its run, and would add to the impact of the show in immeasurable ways.

The show’s main message, “Never Look Down,” in reference to the constant need for humans to look up to God, turned out to be more and more real as time went on.

Of course, the way JTD began was already a harbinger of the colorful history it would follow.

Staging JTD under its original cantata name, “What Really Happened to Joseph” by Cam Floria, was Gina Sybico’s idea. She got as financier Bro. Manolo Cantos. Both were from Cebu, which was deemed to be the perfect city to start the run in.Being from that city, I was thrilled, but after listening to the cantata’s recording, I was no longer that keen on doing it.

But persistence is a Cebuano trait, and Gina and Brother Manolo did not flag in, encouraging me to give it a try.

After some days, Mari Kaimo showed me a draft of how he envisioned the script to be. For reasons I cannot explain to this day, I stopped in my tracks, I looked at Mari and said, with purpose, “No. THIS is how it’s going to be.”

And just like that, I started reciting lines and naming the characters that would say them as if I had already written the script myself!

I turned to Mari. Sheepishly, I told him, “I’m supposed to write this, not you.”

Within days, I did. And within weeks, we had assembled a cast led by Audie Gemora and were on our way to Cebu.

End of story, right? Not quite.

We land in Cebu, we join forces with a local chorus, we go to our assigned hotels. Everything seemed hunky-dory.

But the script needed a punchline and I didn’t know what it could be. Until a few hours before the show, I did a maneuver on Audie and blurted out: Never Look Down! I was almost dumbfounded. I had found my punchline.

Opening night was terrific. Bravos rang out in the theater, and everyone was up on his feet.

With only two scheduled performances and the first one done, we went to our respective lodgings to get some rest and prepare for the second.

My hotel phone rang. It was my cousin, Chu Nepomuceno, in Manila.

This was a first for me and in a few hours, after several more calls, it was decided to gather the cast, especially the ones staying in a nearby island resort, and house them all in the hotel where I was. Put everyone under one roof, so to speak.

By mid-morning, I was crossing the bridge to get to the island resort. I looked down and spotted a sleepy, calm strait of water with one large barge sailing through.

I got to the island resort. Carlo Orosa, whose sense of humor defies normalcy, was fake-yelling, “The Japanese are coming!” harking back to WW2 days.

I got them all and on the way back across the towering bridge, I looked down and saw the large barge had docked on the island pier. I thought nothing of it and looked away, not noticing who were getting off the barge.

Back in my hotel, we got rooms for everyone and had breakfast. Somewhat.

Because minutes later came the news that the island had been overrun by the coup d’etat rebels and was now under siege, including the modern airport on the island. How did they get there? Through the large barge that had docked as we were leaving.

At this point, people swarmed the hotel, all wanting rooms. There was none left. Unknowingly, we had taken them all.

Later that night, one truth became obvious. We could not leave Cebu the next day, the rebels were everywhere, the airport was under siege, no boats were leaving. Gina and Brother Manolo challenged me to do one thing: add a performance.

Illogical, impractical, absurd. But OK, let’s do it.

The cheers and tears of that performance were unstoppable and at the end of the show, I asked the audience to please help spread the word that we would have one additional performance the next day. They clapped. That was a sign.

I should have known.

By 5 p.m. the next day, we got word that there were no more tickets left. We went to the theater and found a massive crowd that had actually bent the full-length iron doors in their eagerness to enter the theater.

If that wasn’t enough, members of national media, stranded in Cebu, were also present, each one demanding to know why this was not being shown in Manila and boy, were they going to write about it! They did.

I thought it was over. It was not.

The next day, living arrangements had to be fixed again. This time around, with hotels getting too expensive, we were sent to different generous houses without a guarantee of when we would be able to leave.

Then it happened again.

After everyone had been given house assignments, I stated outright: “We are leaving on Saturday at 4 p.m.”

Double huh?! Where did that come from?

There was one thing I didn’t realize. All the houses we were assigned to were located beside a very crucial spot: the old, original, long-closed Cebu airport.

That airport was an important part of my childhood and was beside my high school, but it had long been shut down except for hobbyists. Until that coming Friday.

Brother Manolo surprised us suddenly with the news that one airplane, just one, would be allowed to take off from that airstrip. And he had made sure each of us had a seat on that plane.

Maybe I should have been but I was not in tears when I said my prayers that night. I merely said, “Thank You”… and had one of the most restful sleep of my life.

But that was just the journey’s beginning. As they had promised, the Manila press people would not stop writing about us and next thing we knew, “Joseph, The Dreamer” would surge again and again with a persistence that sometimes leaves me in bewilderment.

It could be an earthquake this minute, a massive flood the next, a volcanic eruption tomorrow. Still… never look down.

So I keep at it. And so do many others. We do our darndest to never look down not because we’re a bunch of dreamers. But because we need to keep fulfilling the dream. —CONTRIBUTED

The author is one of the foremost theater directors and actors in the country.“Joseph, The Dreamer” runs until March 7 at Maybank Performing Arts Theater, BGC. Ticketworld.com.ph