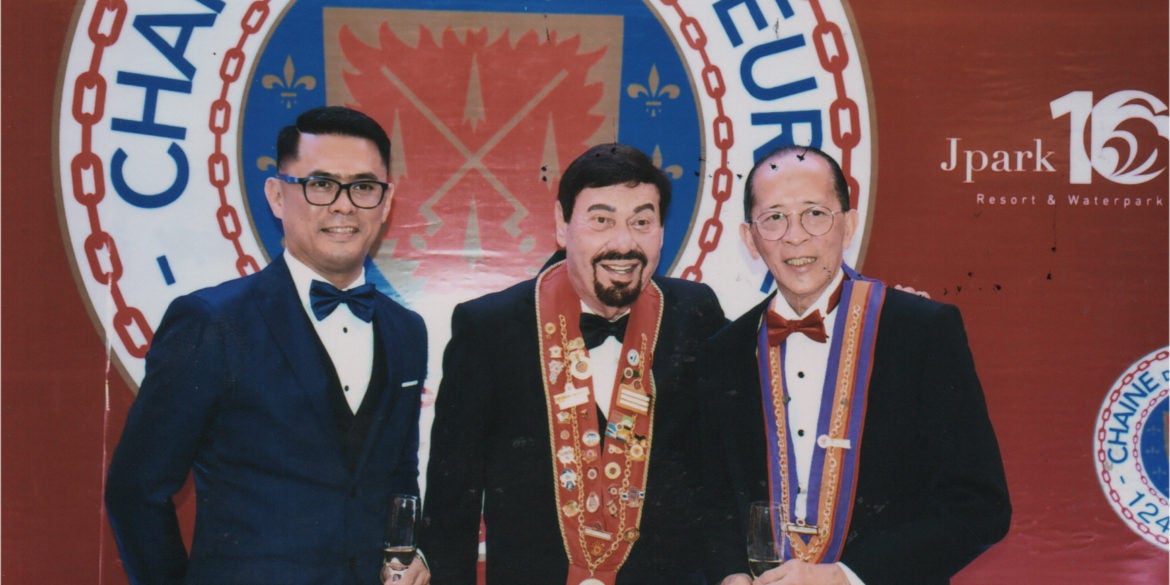 Gala events for the Cebu chapter of La Chaine des Rotisseurs come in quick succession. Most recent was the anniversary gala held at the splendid Triton ballroom of J Park Island Resort and Waterpark in Mactan. And now, on March 7, is the induction gala at the ballroom of the Marco Polo Plaza Hotel.

Hands on in both celebrations is Michel Lhuillier, La Chaine’s Baili Delegue for the Philippines. His beautiful wife, Amparito Llamas Lhuillier, is the Baili de Cebu

The event at J Park in Mactan was attended by 120 guests who feasted on a delicate menu devised by general manager Jonathan Nowell and Christopher Shim, the resort’s guru for food and beverage for almost a decade.

Here for the occasion were Federico and Josephine Borromeo, he being the Baili de Manille, and having a soft spot for Cebu. He has legions of relatives here.

This event was an occasion to meet the new general manager of the Shangri-La’s Mactan Resort and Spa, Christian Nannucci and his wife Debbie Tay. He comes from Florence.

In turn, this was an occasion to say farewell in advance to Stephanie and Stephan Dierg. He has completed his tour of duty as general manager of the Radisson Blu Hotel Cebu.

The Triton ballroom of the J Park was truly magnificent. Tables for 10 radiated from a semicircular stage where the evening’s entertainment was performed. All tables were abloom with varicolored flowers.

The evening’s fashion plates were, of course, Amparito in shimmering red lace, Teresin Mendezona wrapped in electric blue, Vivina Yrastorza in pale orange brocade, and Dottie Cronin in white. “You must come, visit me,” she said. Dottie is the general manager of the soon to open Sheraton in Mactan.

“Black and White” refers to the stunning décor of the ballroom, and the menu. Truffles, anyone? That’s what La Chaine’s board of directors want to find out at the food tasting planned for end of February.

As to dress code, the men are expected to wear tuxedos or black suits. Long gowns for the ladies may be in all colors, specially bright ones. White may be nice if once can get away with it, but it is not usually flattering, nods Michaela Preisner, the Marco Polo’s resident manager who is Austrian.