How do you raise a 7-year-old angel like Bronte? | Lifestyle.INQ ❮ ❯ 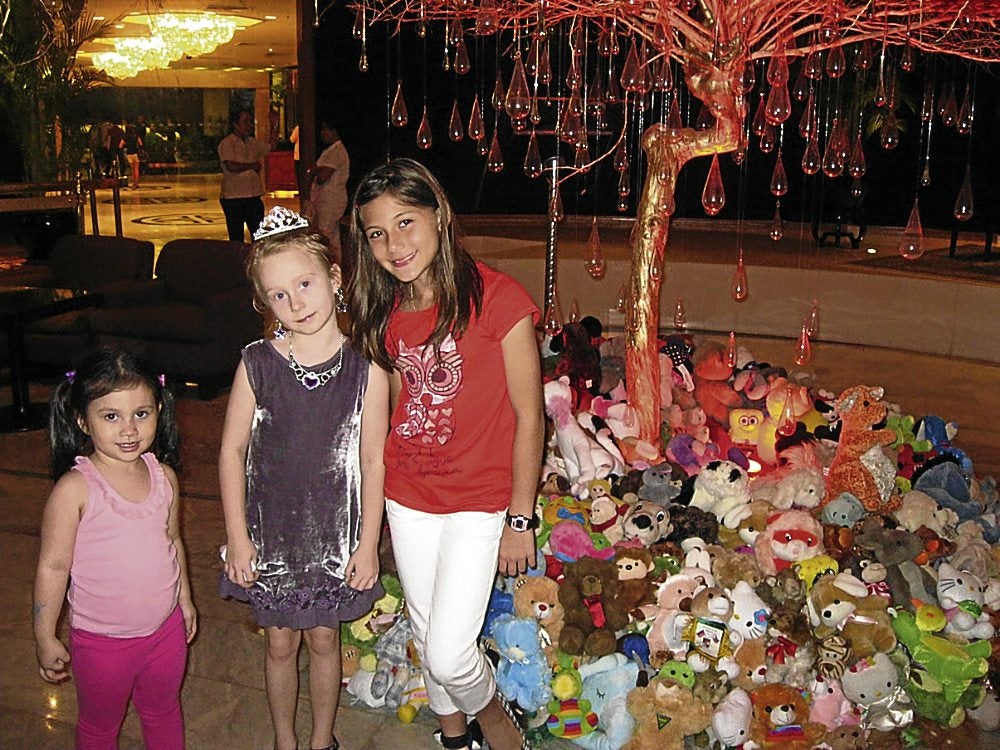 How do you raise a 7-year-old angel like Bronte?

It’s not very often I get to meet a real angel. Last Wednesday, that was exactly what I got to do.

Bronte Henfling had no wings or halo—only tap dancing shoes, a tiara  and hot-pink nails, as all 7-year-old angels do.

I had been looking forward to meeting Bronte ever since my sister-in-law, Ana, forwarded me a link to her video on YouTube. You may have heard of her and her video by now, which starts with familiar images and videos of the tragedy of Tropical Storm “Sendong.”

But what is unusual is the voice accompanying it. It’s a young and innocent voice explaining, to the best of her abilities, what has just happened to all these families and more important, how the children must be feeling.

She asks the viewer, “How would you feel?” with a sense of urgency, but she does not end there. She comes up with a plan to bring some joy to these children—1,000 stuffed toys for Bronte and Frank’s (that’s her teddy bear) Typhoon Toy Drive!

As Adriana and I made our way to Mandarin Oriental, I wondered how many bears the video had been able to gather. At the lobby lounge, we were met by family friend Nena Wuthrich. Nena is the foundation development head at LBC Foundation and my link to Bronte and her mom, Megan Worthy.

We immediately saw the hotel’s teddy bear drop-off point, “Tree of Love,” under which hundreds of colorful bears, of all shapes and sizes, were carefully stacked. Adriana and Bronte gleefully added our bears to the pile while I congratulated Megan on a job well done.

This all began when Bronte, with her parents, saw the devastation of “Sendong” on TV. Living in Los Angeles, she was not familiar with typhoons. While other parents might have tried to shield their young children from such a traumatizing occurrence, Megan explained it all to her.

Taking her cue from her parents, who, at this point were doing what they could to help through Hands On Manila, Bronte decided  she had to do something as well.

Inspiration was found in a child’s beloved bear and constant companion since she was a baby.

Armed with a video camera and plush toys as supporting cast in her video, Bronte proceeded to record her message and plea. They didn’t know what to expect. After all, millions of videos are uploaded every day. Who would notice this one?

A lot of people, apparently. Soon, bears were arriving, not just from Filipinos, but from all over the world—the US, Europe, Japan and Australia.

And the best part was that it was children themselves mobilizing to collect bears, such as what Bronte’s 7-year-old cousin in New York did.

She immediately wrote a letter and read it to her classmates in school.

Before long, Megan received word that 200 bears were on their way.

Meanwhile, Nena’s 9-year-old niece, Andy, managed to collect a good number of bears from her schoolmates and friends. Many of the bears came with note tags and letters written by their young owners, and with wishes for the new owners.

One day, they got an urgent call. The message was short and cryptic. Unsure of what to expect, they proceeded to the ballroom where the Mandarin Oriental’s general manager Mark Bradford, with the entire hotel staff, had decided to surprise their guests with a stage full of bears!

Each employee had brought one (or more) to help Bronte’s cause. “She was so shocked she couldn’t say anything!” Megan laughingly recalls.

As bonus,  Bradford announced that the hotel would be dry cleaning the bears before they are sent off to the children in Cagayan de Oro.

How do you send 3,500 bears to Cagayan de Oro? That’s when the video fell into the lap of Nena. She immediately mobilized the LBC Foundation and now, as you read this, they are busy packing, storing  and shipping the bears, to be delivered Feb. 26.

Then came the trip to Cagayan de Oro. It would have to be a Sunday so that Bronte’s father, Skip Henfling, a location accountant for the production team of “The Bourne Legacy,” could join them. The plan was for the trio to go on a C130, courtesy of an American captain Megan met in the lobby, but since the return flight would be a problem, another plan was needed.

It didn’t take long for Liza Gokongwei to hear about Bronte and immediately, Cebu Pacific was offering the family the trip to CDO where they would be met by the representatives of the Black Pencil Project. The project has been busy conducting the post-traumatic stress and grief counseling of the children. It will distribute the stuffed toys to the thousands of children affected by the tragedy.

Some people tried to discourage the family from taking Bronte to the evacuation centers because the experience might be too much for such a young age. “But that’s just the thing. I want her to experience it. I don’t want this to just be an idea for her. I want it to go full circle for her,” Megan said.

“This is what I’ve always done. I’ve always exposed her to the realities of every place we go to.”

For this family, that’s a lot of places.

Working in the location production industry means that the family is always on the go. For short-term stays, Bronte is home-schooled using an official US home-school curriculum.

When they know that they will stay in the country for a long period, they enroll Bronte in school but unlike other expat families, they shy away from international schools and, instead, choose local schools where their daughter can immerse herself in the culture and learn the language of the country.

This experience has been truly enriching for both the parents and child. It has given Bronte a childhood that is unique and far from sheltered.

Meanwhile, Megan has used these journeys to come out with a travel tips book for children and a multi-awarded series of children’s story/activity/travel books under the title “Bronte and Frank.”

They travel as much as they can in whatever country they’re in, and try to show Bronte both the beauty and harsh realities of the places they visit. On a recent trip to Boracay, they showed her not only the beautiful beach, but also the inland villages and local communities.

There, Bronte spent all her “money” buying necklaces from little girls. Back in the city, Bronte gave all the necklaces away to children she saw on the streets.

In 2010, they were in Moscow during the mass evacuations, and in 2011, they were in New York when Hurricane “Irene” struck and the blackouts occurred. Megan explained to Bronte what was going on. “We live in hotels. I don’t want her growing up feeling entitled and privileged or thinking this is what life is all about.”

“Is this your secret to raising such a socially aware and compassionate child?” I asked. She laughed, but I pressed on. Finally, I leave it be.

Megan will not admit to any secrets or take full credit for her daughter’s generosity.

I suppose as with any parenting goal, there are no secrets or magic formulas. It’s just a whole lot of trial-and-error, coupled with the best intentions, to raise a child the best way you know how. And from the looks of it, Megan and Skip have Bronte (and Frank!) on the right path as she goes her around the world.

You can still send a bear to the Mandarin Oriental Hotel, and view the video at http://www.youtube.com/watch?v=xGWE6qxFpDE