Why ‘Joseph the Dreamer’ is a powerful celebration | Inquirer Lifestyle 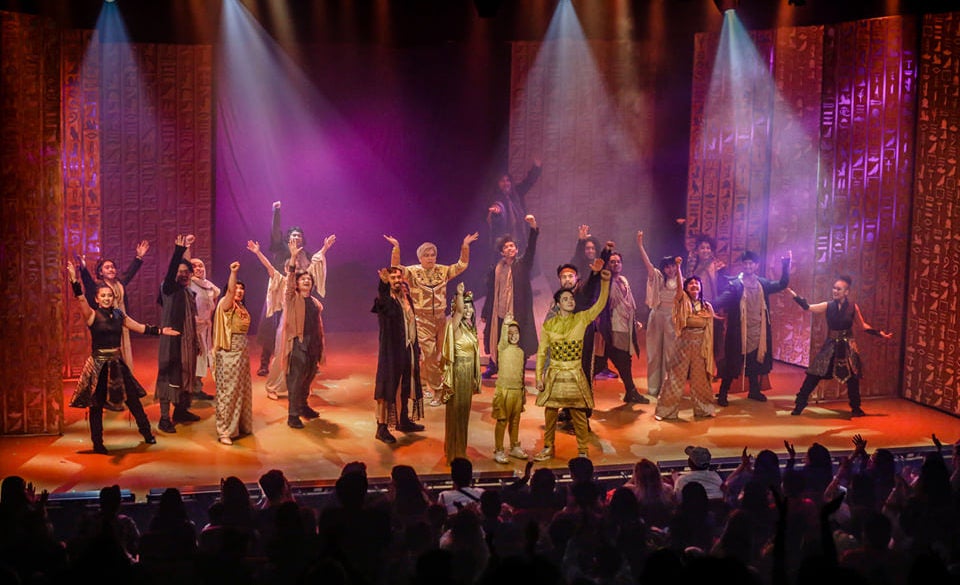 The cast of “Joseph the Dreamer” —MYRA HO

Like many biblical adaptations before it, Trumpets’ “Joseph the Dreamer” interprets this story of a son sold to slavery as one that ultimately inspires joy and gratitude. Director Paolo Valenciano’s treatment of it is downright euphoric at times—breathtaking visual design and choreography transforming this musical into a full-on worship service. This sense of inspiration, however, is curiously lacking in the production’s more somber moments, but there’s still enough fun to be had here for those in need of a jubilant crowd-pleaser.

“Joseph the Dreamer” makes no bid to appear period-specific—a choice that allows the story to really spread its wings. Cam Floria’s score (with Myke Salomon’s musical direction) draws heavily from popular Broadway styles and modern Christian pop and hip-hop, all to great effect. God’s saving grace is shown to animate His believers, blessing their voices and movements with seemingly unlimited range and stamina.

And what a cast of performers to show off those qualities: As the musical’s narrator and Joseph’s eventual bride, Kayla Rivera just refuses to sing a false note. Bituin Escalante, as Joseph’s mother, gets to belt a stunning second act number. As Potiphar’s wife, Alys Serdenia emerges as the show’s secret weapon, soulful and sultry and in complete control of the stage for too brief a scene. And as the titular dreamer, Sam Concepcion imbues his every move with clear passion. If this production was just a worship concert, it would be immaculate.

However, “Joseph the Dreamer” isn’t just a worship concert. As a dramatic piece, it’s noticeably less inspired; the production loses momentum when the story doesn’t allow for another uplifting song or high-energy routine. The musical’s quieter scenes (especially those between Joseph’s brothers and doting father, played by Audie Gemora) are meant to communicate weight with their silence and simplicity but they appear too static for their own good. There can and should be beauty in moments of human weakness, but “Joseph the Dreamer” comes off as disinterested in them.

In fact, the show seems to actively rush through most of its conflicts to get to the next positive moment. The desire to please and energize the audience is understandable, but the tale of Joseph ranks among the Bible’s darkest and most melodramatic stories. This kind of optimistic approach misses out on the opportunity to unpack the jealousy, betrayal and manipulation that drives the action.

Of course, most adult audience members should already be aware of these underlying themes, but “Joseph the Dreamer” doesn’t necessarily bring them to light.

Still, the show knows exactly who it’s preaching to, and it delivers its sermon as a loud and proud spectacle. If the story appears sanitized and watered-down, Mio Infante’s production design and Dong Calingacion’s lighting make up for it with dazzling colors and an impressive use of the stage’s depth.

It’s in “Joseph the Dreamer’s” visuals where God can really be found in the details: the costumes range from fashionable streetwear to ancient Egyptian glam rock, while Joseph’s dream sequences are more surreal and hypnotic than anything else that’s likely to be put on stage soon.

For all of its hit-or-miss storytelling choices, the musical embraces the fact that it’s a celebration at heart. Nowhere else is this clearer than in MJ Arda’s electric choreography—arguably “Joseph the Dreamer’s” single greatest strength. In the context of an inspirational Bible story, the dancing here isn’t just dancing, but a spirit moving from one performer to the next with every twitch of the hand.

It’s here where Concepcion really gets to stand out, rallying the entire ensemble into one moving organism. It’s infectious work that elevates the show’s positivity into something that’s harder to truly define—and therefore, more powerful to behold. —CONTRIBUTED