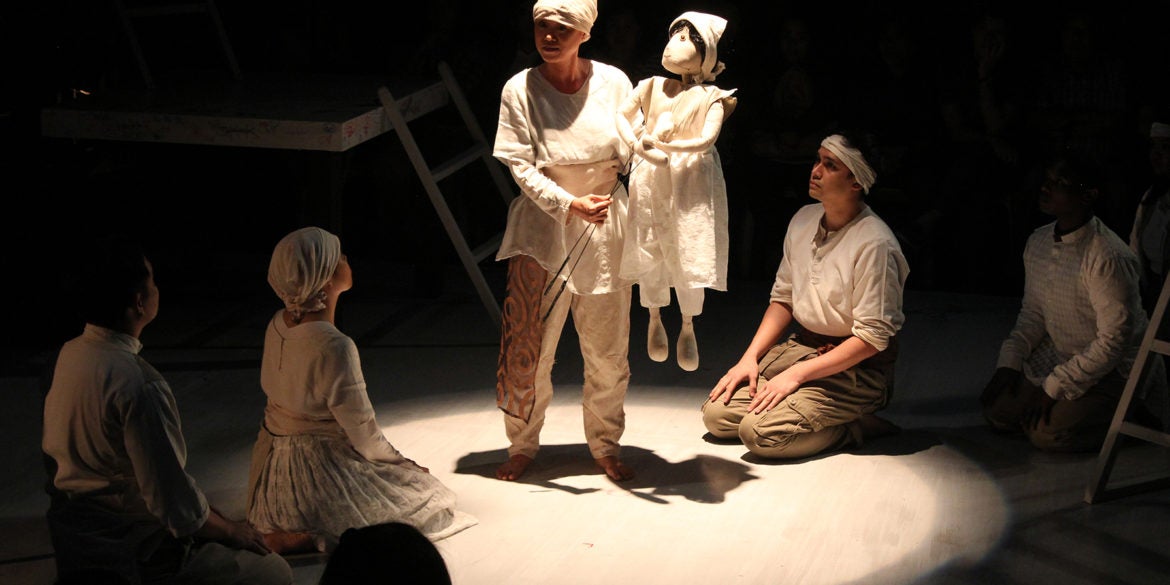 A puppet figures in Tanghalang Pilipino’s (TP) premiere of Malou Jacob’s “Batang Mujahideen.” It is the character of Fatima, who witnesses her father’s death at the hands of a Christian extremist, and is later transplanted to an Abu Sayyaf training camp. We see her learn to use a gun, take necessary steps to become the title character—child jihadist—in the definition that militants have reduced “jihad” to.

Fatima is only a piece of the puzzle. The larger world of the play is set in March 2000, when the Abu Sayyaf raided two schools in the island-province of Basilan and abducted over 50 individuals, including students, teachers and a Roman Catholic priest. Fatima learns to hate; the kidnapping victims learn the taste of fear.

How these two narrative strands intertwine is but one of the many strengths of this play, which, though written by Jacob, is also devised—developed and written further—by director Guelan Luarca and the TP Actors Company (AC) that comprise the cast, with dramaturgical input from Dominique La Victoria.

The end point is something we already know: Violence begets violence. An entire school coming under a terrorist attack may not be of the same contextual scale as a father being brutally murdered before his child’s eyes, but the seed of fear, and more importantly, of hate, is planted all the same.

The play acknowledges that as a fact of life; it serves us drama through facts, and not cop-outs. But more importantly, the play recognizes that the path to a violent end is preceded by a constant push and pull between fighting for peace and giving in to the temptation for revenge. This inward interrogation is ever present in the play, in the way it structures its plot points and in the words of its characters: The cycle of violence may often prevail, but its path to victory isn’t easy. Everywhere there are people who still believe in goodness, and who will stand by goodness, despite the odds.

Luarca captures all that and more. His production flows with an assured rhythm, like a cogent debate, brimming with ironic calm and intellectual rigor. He lets his actors shift between playing narrators and characters in the story at a brisk pace that never sacrifices clarity. There are arresting scenes of violence, even some coups de theatre, but these are interspersed between lengthy moments of quiet, the play somehow insisting on storytelling and conversation—the power of words!—as salvation.

The design of this production is fundamentally flawless. Marco Viaña and Paw Castillo, in addition to designing the costumes, have created a set that resembles a classroom jungle, with flexible blocks and staircases to conjure different worlds and timelines. D Cortezano (lights) and Arvy Dimaculangan (sound) are reliable as always, turning in topnotch work; their contributions are most essential in materializing violence onstage, complementing Jomelle Era’s movement design.

Among the cast, Manok Nellas and Jonathan Tadioan are forceful presences in their multiple characters, but the standout is longtime AC member Lhorvie Nuevo. Hewing to the prologue’s promise to disregard age and gender, Nuevo plays fallen Abu Sayyaf head Khadaffy Janjalani with an acute understanding of the combined power of kindness and silence. Marlon Brando in “Apocalypse Now” and Joe Pesci in “The Irishman” both knew this: Sometimes, the softest voice in the room is the most frightening of all. Amid the theatrical carnage, you can’t help looking at, and for, Nuevo.

There are faults in this production, of course—graphics that come up short in a logistical sense, performances that are either far less commanding than a role demands or hammy to a degree, lines of dialogue that are distractingly on-the-nose polemical.

No matter, “Batang Mujahideen” is still magnificent, astutely crafted theater. It runs for less than 90 minutes, which is nothing if not intelligent use of such brief stage time. It has five remaining performances (no thanks to COVID-19!), but deserves to run for plenty more. —CONTRIBUTED