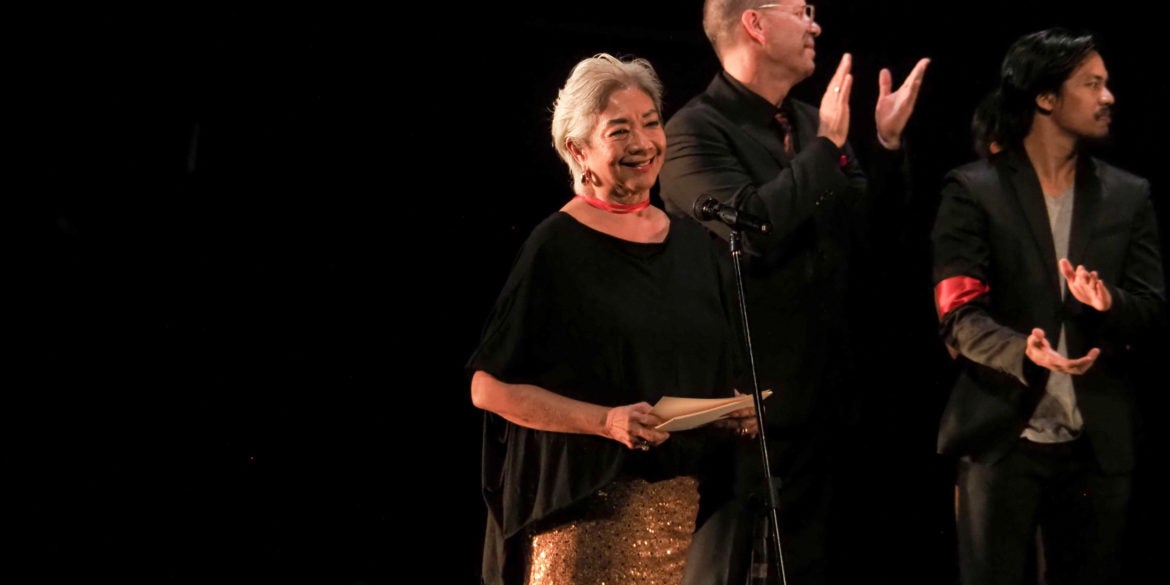 In the Ballet Philippines (BP) controversy that just won’t go away, the initial issue, many agree, is neither the competence of the incoming BP artistic director, nor the direction BP should take. It is neither who should prevail—the management or the arts—nor is it to rate the financial or professional support that has been given the company.

The issue, which riled up many, is how Alice Reyes, a National Artist and the founder of the country’s premier ballet institution, has not been given the respect and courtesy due her at the end of her stint as artistic director. Acrimony could have been avoided had BP had smooth separation from her, had the board put her in the loop in the selection of the appointment of her successor, had the board sounded out the members of the dance company on the choice of the successor, since after all, the dancers are the core of the company (no performance, no company—no need to belabor the point, right?). You don’t treat a coworker that way, let alone the founder and National Artist.

Philippine ballet—indeed, the country—owes Alice Reyes for her body of work that helped define dance in the country, and for spawning the careers of generations of ballet artists.

It is a controversy that could have been perfectly avoidable had the transition been managed better. Management 101, as they say. It could have been a smooth transition that need not have rocked Philippine ballet that is still struggling to build a solid audience.

In any team/corporation/venture, major decisions are discussed with, cascaded to the body, even if the final decision rests with top management. Why not in a culture institution that is fueled by the passion of its dancers? How can a leader not ask these stakeholders to sign up, to use corporate parlance?

“It’s mystifying why they excluded me from the process (of selection),” Reyes told us last week.

“Am I difficult? Am I, as I heard, guilty of having a ‘founder’s syndrome’? I am not clinging (to the position), nor am I the clingy type. I let my children study abroad in their early teens,” she added.

She echoed what many feel in the arts circle: “I am sad that something happened between the (BP) board and myself that kept us from having a conversation. A basic conversation. It could have smoothened this transition. It’s not like I’m insisting on staying.”

She pointed out: “I attended meetings when I was in town. When they called me up in November about the selection (of her successor), I was (in the US) undergoing hip replacement surgery, so I couldn’t fly in.”

But still, some say, what could have prevented the board and Reyes from having an ongoing conversation in this era of high-tech communication when everything is just a text or video conference-call away?

For some time now, Reyes has been based in the US, although she has been running her thriving export business here for more than 30 years by shuttling or long-distance communication.

From 2017, when she accepted the offer of then BP president Margie Moran-Floirendo to return as BP artistic director, to this day, she has been shuttling between her residence in New York and Metro Manila about six or seven times a year.

Her artistic directorship is pro bono work. Since she is a BP board member, according to the BP bylaws, she, like other members, could not receive compensation for work done in BP.

Also, it must be noted that Reyes has given her works free to BP to stage (“Rama Hari,” “Itim Asu,” to name a few).

Last September, Reyes gave the board notice that she would step down as artistic director in April 2020, in compliance with the contract she signed when Moran-Floirendo was president. (For chronology of events, see “What went wrong in Ballet Philippines?,” Lifestyle Feb. 16, 2020 issue)

In that notice, she also identified the two successors she had been mentoring. Unfortunately, Reyes and the board never got to discuss this succession plan or for Reyes to explain the reasons for her choices. Last January, she accidentally found out that the new artistic director would be flying in from abroad, as she was signing the check for his airfare. Shortly after came the announcement from the board on the new artistic director.

It was then that the dancers voiced their protest, and on social media, BP alumni, the dance and arts sectors expressed surprise and condemnation. Some posts:

Nestor Jardin, former president of the Cultural Center of the Philippines (CCP) and himself a dancer and former president and administrator of BP, wrote: “I was fortunate to have been a member of BP during its early years. It was the company and its founder/artistic director Alice Reyes who nurtured me and molded me as an artist and arts manager… I am, therefore, appalled to learn that National Artist Alice Reyes… did not get the full support of its board of trustees and president causing her to resign from the company she co-founded with Eddie Elejar. And more appalling is that she was not at all consulted in the choice of her successor.”

Reading the post of Edna Vida Froilan, whose lead roles in BP in the ’70s and ’80s helped grow a ballet audience, you feel the intense reaction to, if not fury, about this development—“It’s okay to get a new artistic director… but to get one without the right DNA is lethal… BP is a unique dance company. It is one of the few companies in the world that can perform classical ballet and modern dance with equal excellence. This was the vision of founder, artistic director emeritus and National Artist Alice Reyes… This exceptional artistic thrust stood the test of time that even in her absence the company progressed. The BP DNA remained consistent in the veins of the artistic directors, dancers, choreographers and staff that followed…”

You might ask, when does the preservation of the BP DNA give way to fresh blood and repertoire—a point tacitly made by the board to explain its move.

But as many pointed out, the issue isn’t the need for change, but how change is managed.

Philippine ballet can use all the help it can get. When Moran-Floirendo and Reyes started their collaboration, they enlisted the help of BP alumni—from whose ranks alone originated more than 30 dance groups in the country—to raise financial and logistical support for BP. Among the needs was to refurbish the company room that was falling apart.

The alumni raised about P500,000. A BP alumni reunion performance was staged. However, someone in the board cast doubt on the right of the alumni to use the name Ballet Philippines Alumni, for fear that the name of BP might be used for other purposes. Reyes, a source said, felt hurt by this refusal to recognize the BP Alumni.

While even the hardcore sympathizers of Reyes recognize the significant efforts of the board to support and sustain BP, still they stress that artistic independence is the anchor of any arts entity. “It’s not all about money,” one said the obvious.

Reyes herself pointed out the example of American Ballet Theater—how it has evolved into a premiere dance institution in the US. It was founded by one of America’s wealthiest women—who left it alone to thrive; she respected its artistic independence.

There are those who say that the controversy is merely the final proof that Reyes didn’t get along with the board. On her noninclusion in the deliberation on the artistic director, Reyes told us, “You could go about it that way (noninclusion) if I was doing bad shows or driving away audiences or doing bad with the dancers….I never got to explain to them my recommendations.”

Indeed, what open communication lines could have averted.

Amid this controversy, Reyes remains cool. She’s always been an independent, outspoken, feisty woman (you’d better be if you led a dance movement in the country), but at our lunch, she was so casual, concerned but calm. From the time we covered her career in the ’70s to the present, we’ve always observed her regal demeanor. We were able to interview or encounter the world’s ballet greats such as Makarova, Plisetskaya, through BP productions under her watch.

The point I’m driving at is, Reyes is an institution, a pillar of Philippine culture. That’s not to say you put her on a pedestal. At the very least, you get her opinion on ballet, certainly about the company she founded.

“My mother taught me three basic things,” she said, referring to Adoracion Reyes, one of the foremost voice teachers in the country decades ago. “Having talent is a responsibility. Huwag kang magbuhat ng bangko. And you treat the janitor the same way you treat a president.”

She said that by way of explaining what she felt about her departure from BP.

Asked about her plans after BP, Reyes said, “As National Artist, I feel I should do something, go around the country and look into dance, its venues. You know Cebu doesn’t even have a performing arts theater?”

In truth, this issue goes beyond Reyes—into how our society treats its artists, and just as important, its retirees. How do we value or disregard their knowledge and wisdom, their skills and experience, their contribution?

What example do we give the next generation in the way the young should treat the older generation?

Reyes feels positive about the state of ballet in the country. “It will continue to grow because there are many choreographies.”

However, she hopes there will be greater collaboration among the disciplines. “Tita King (National Artist Lucrecia Kasilag, former CCP president) had the League of Filipino Composers collaborate with ballet. This collaboration process yielded many works. When you have something good, the audience will come.”