Clark City Athletics Stadium vies for Stadium of the Year, against the world’s best | Inquirer Lifestyle 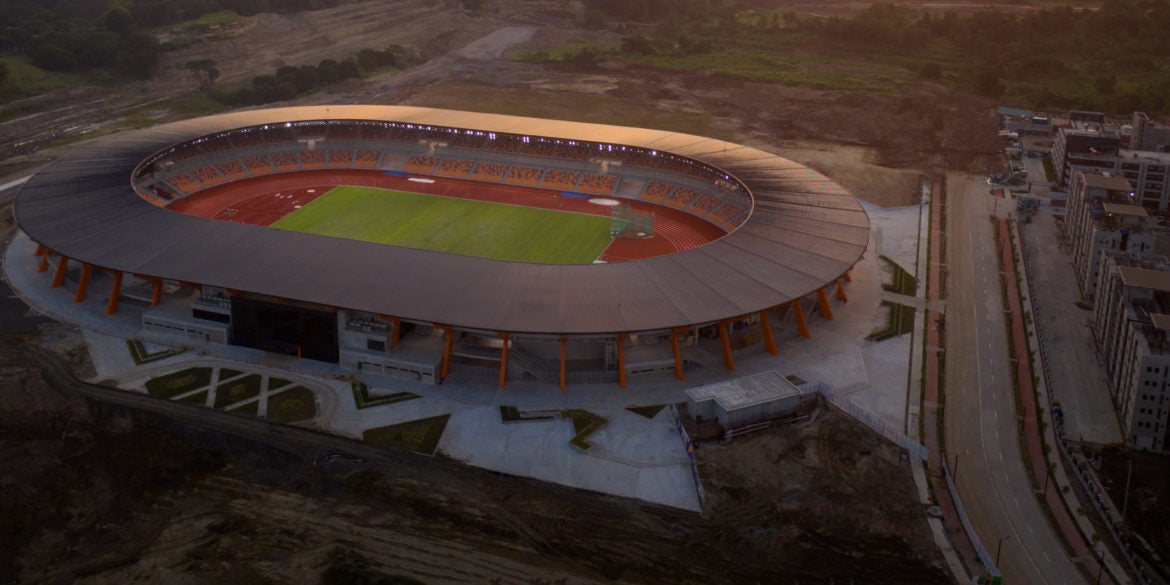 The New Clark City Athletics Stadium evokes a sense of place with its volcano-like facade, inspired by the neighboring Mt. Pinatubo.

Clark City Athletics Stadium vies for Stadium of the Year, against the world’s best

It’s yet another story of David against Goliath. The New Clark City Athletics Stadium in the Philippines is shortlisted for the Jury Award of Stadium of the Year 2019, competing with 10 others from around the world. The Jury Platform will be announced March 18.

Stadiumdb, the online stadium award, posted that for the first time in the competition’s history, there are many Asian entries.

Stadiumdb, or Stadium Data Base, is the world’s larges website on stadia. The Stadium of the Year Award consists of two categories: People’s Choice is based on online voting; the Jury Award is chosen by a panel of experts.

In an article describing the Athletics Stadium’s merits, Stadiumdb, wrote that the Philippines had no public stadium of international standards until recently.

Stadiumdb cited how Budji + Royal took into consideration the proposed green development of its site, New Clark City, and how the firm considered working in the Philippine context with a modest budget.

It also mentioned that while other large-scale projects would take two or three years, the Olympic-standard New Clark City Athletics Stadium was built in 17 months with facilities in place.

Principal architect Royal Pineda still does not know how the project was nominated. “We don’t know who submitted our entry—not from our side, the BCDA nor the developer (MTD Development). They (Stadiumdb) wrote descriptions of the projects. They were able to present the essence of the New Clark City Athletics Stadium,” he says.

The article, “New Stadium: Philippines Raising the Bar for Professional Sports Infrastructure,” underscored, Pineda said, that “the approach used was described as ‘practical luxury,’ which means the best aesthetic outcome with simple means.”

Pineda explained in an interview with Lifestyle, “Almost every stadium on the list is very expensive and very high-tech. They are articulating a specific look that is visually eye-catching, and making a statement, but you wonder what the functions of their elements are. In our project, we stripped off what was unnecessary and came up with something aesthetically pleasant and very functional.”

The architect explained that practical luxury featured the extensive use of local material like lahar. It is also characterized by air permeability, ease of movement between spaces. It is a low-maintenance design.

With a 20,000-seat capacity, the 73,580-sq m stadium is in Tarlac, one of the provinces that surround Mount Pinatubo. The design conveys a sense of place. with its façade resembling a volcano with a crater-like canopy.

Mixed with concrete, the lahar retained its texture, unlike painted surfaces that need constant sprucing up. “We spared the building from being painted. It will age gracefully,” he said.

The beauty of the structure lies in the exposed parts which become aesthetic details. “Everything is exposed—the wires, cables, beams, nuts and bolts. They can be spotted easily and replaced. The government didn’t have to spend for cladding. If the bones are beautiful, why dress them up? Architecture should be truthful from the start. In the space planning, we calculated an efficiency ratio (the allocation of usable floor area) wherein spaces are designed to flow into each other to lessen the long hallways. There are no dead or wasted spaces. That’s the idea of practical luxury. You are mindful of resources.”

The architecture also addresses the tropical climate and its proximity to the volcano. The structure can withstand an earthquake with a magnitude of 8.9.

Pineda notes that it meets the needs of the country, such as a having a world-class facility that is adapted to the climate. In a conventional stadium, the basin design doesn’t make provisions for air circulation. At the New Clark City Athletic Stadium, the raised roof prevents build-up of air.

“The stadium walls are perforated so that there are axis wells for the air to pass through. You can feel the breeze when you’re inside. We are sharing this approach to tropical architecture with the world. Stadia should not be all building blocks,” says Pineda.

“The Philippines can be on par with the world through our practical luxury. We don’t need to be First World to host international events. We can do it with our concept of practical luxury.”

He points out that the practical luxury is also demonstrated in its design project for the Expo 2020 Dubai.

While other countries will present behemoth pavilions, the Philippines will delight the world with its outdoor installation.

The architect sees this as a paradigm shift from massive, high-tech structures to simpler and sustainable designs.

“People have been building expensive projects. In the end, you ask what the spaces, voids and details are for. They tend to become wasted. Big building can please the eye, but once you step inside, you feel there’s some disconnect in the flow of spaces. This stadium is the real sustainability. From the outside, it’s eye candy because of its presence—the scale and the proportion. When you walk in, the architecture starts to reveal the message of practical luxury.”—CONTRIBUTED INQ