Why ‘Matilda’ will move you | Lifestyle.INQ ❮ ❯ 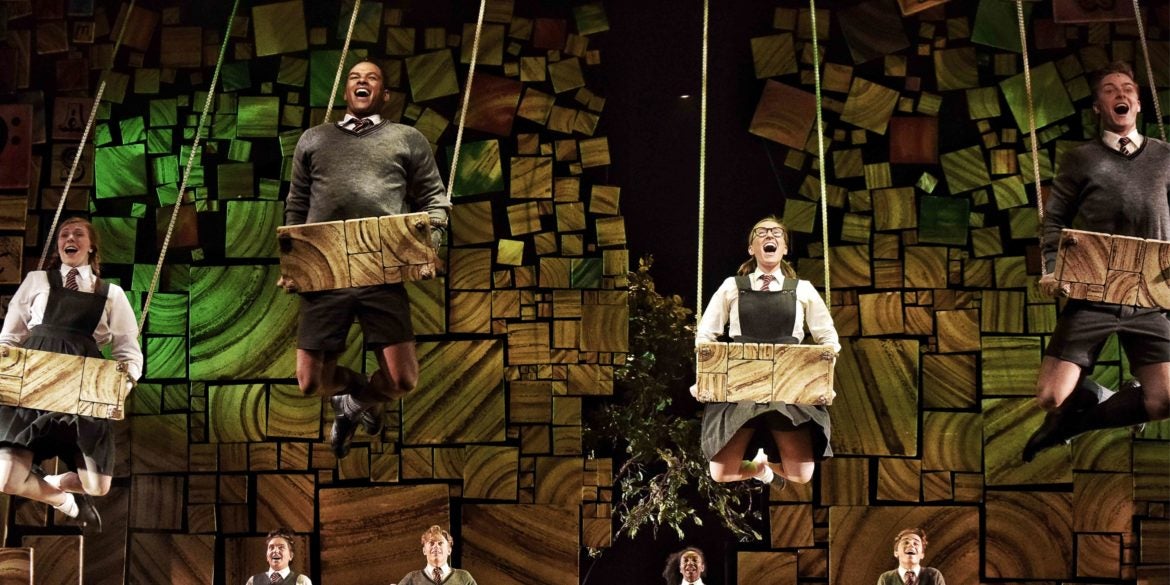 Why ‘Matilda’ will move you

With its direction and the cast’s wondrous performance, it has as much to say to adults as to kids

The works of Roald Dahl have always been Trojan Horses of sorts. They’re as silly and imaginative as children’s books can be, but they won’t hold back from chastising adults for restricting the wonderful potential that kids have.

“Matilda the Musical,” with its story of neglected and abused schoolchildren reclaiming their freedom, succeeds in capturing the essence of Dahl’s philosophy—and reveals itself as one of the most moving and entertaining spectacles one could hope to catch on stage.

The world of “Matilda” is one made up of squares; there are literally boxes and building blocks on every set and façade. The show’s visual design is remarkably geometric, with lines and shapes reflecting everything, from Matilda’s own voracious appetite for books to the prison cells of traditionalist education.

But “Matilda” is also the farthest thing from conformist. Within the rigidity of this world, the production remains a colorful and outrageous vision of a child’s imagination, exactly how Dahl would have wanted it.

There’s an infectious energy to the musical’s direction (taking after the work of Matthew Warchus, who helmed the original production almost a decade ago) that feels meticulous and gleefully frenetic all at once. Throwaway lines and visual gags enhance the show’s surprisingly dark humor tenfold, while more than a few feats of technical wizardry transform classroom confrontations into glorious, magical set pieces. It’s a musical that constantly and actively thinks outside the boxes it shows us—and as a result inspires the purest sense of wonder.

Just as wondrous are the performances by this spirited touring ensemble. Never mind that most of the child characters are played by young adults; they’re still convincing in their innocence and ignorance, and still manage to squeeze into Peter Darling’s dazzling choreography.

Stephen Jubber (as Mr. Wormwood), Claire Taylor (Mrs. Wormwood) and a riotous Hayden Tee (Miss Trunchbull) are perfectly tuned for both comedy and cruelty, while Haley Flaherty’s devastating turn as Miss Honey is “Matilda’s” great, big beating heart. Zoe Modlinne and Zara Yazbek Polito rotate in the title role with Sofia Poston, whose stoic interpretation of the character works as a counterpoint to all of the show’s noise, and whose excellent voice stays unfazed through all two and a half hours.

Amid all of “Matilda’s” cheeky and outlandish numbers (the alphabet-based “School Song”; the triumphant “Revolting Children”), Tim Minchin’s original score also features unexpectedly poignant songs (the second act opener “When I Grow Up,” and the gorgeously still “Quiet,” for example) that get to the very heart of what this musical is really about. Yes, the spectacle is breathtaking and the jokes are genuinely hilarious, but when all is said and done, this is a story of children drawing strength from each other’s tragic experiences.

This might sound like terribly mature subject matter for a production marketed as a children’s show, but “Matilda”—and Dahl himself, one has to believe—trusts fully in children’s capacity to be kind and honest with their emotions. The musical doesn’t seek to provide blind escape from the personal and institutional abuse suffered by kids; it shows that kids will always be greater than abandonment and pain. The show holds onto this notion of a fundamental goodness in children that needs to be fostered and encouraged, and the effect of seeing this on stage is staggering.

But of course, in true Roald Dahl fashion, this production also has just as much to say to adults. It makes sure to remind the grown-ups watching that they, too, are somebody’s children. And Dennis Kelly’s book isn’t shy about acknowledging how adults can still be bullied by their seniors and family figures. Here is where “Matilda” offers its most moving idea: Ultimately, it proposes that our unresolved problems might actually be better confronted not by putting away childish things, but by embracing the kindness, courage and love of storytelling that we all used to have as kids. —CONTRIBUTED

Following the Metro Manila lockdown due to the COVID-19 outbreak, this production has canceled its remaining performances, originally scheduled up to Mar. 22.