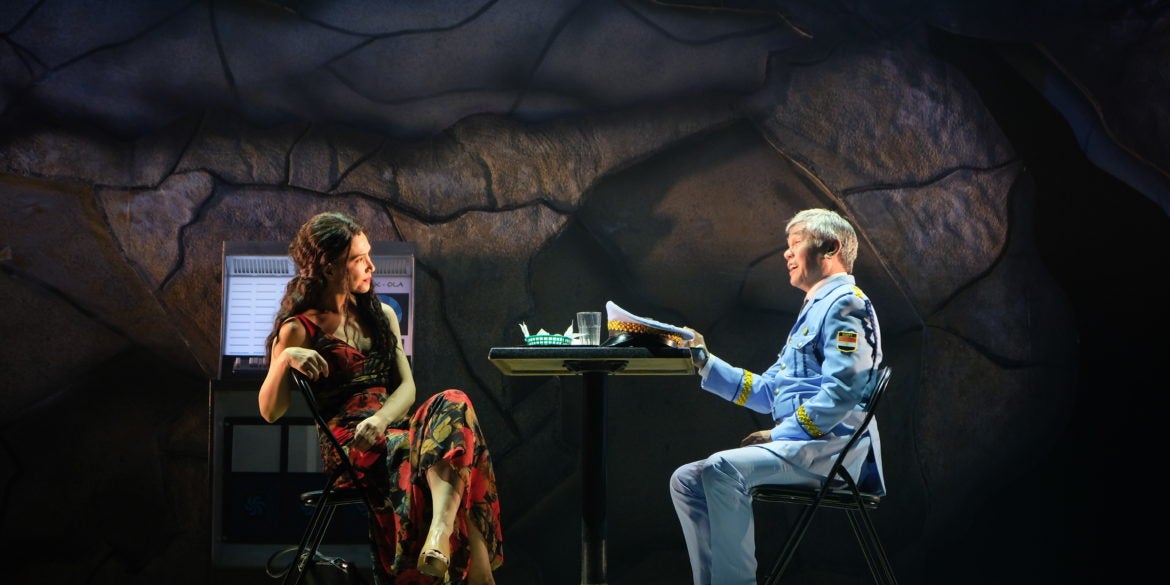 ‘The Band’s Visit’ was simply perfect

Years from now, we will talk of Atlantis Theatrical Entertainment Group’s “The Band’s Visit” and remember how it was forced to close even before it could open.

The irony will not be lost on us: how a musical about human connection had to dim its lights prematurely because of a pandemic that spread, among other means, through human contact.

Fatalists might even claim the musical’s book set it up for that irony. “You probably didn’t hear about it. It wasn’t very important,” goes the opening supertitles, referring to the story of a fictional Egyptian police orchestra that winds up not just in the wrong town, but also in the wrong country.

Overnight, the musicians are adopted by the Israeli townspeople—allowed into their homes, and for that brief span, into their “bleak” and “boring” lives.

This Atlantis production was anything but bleak or boring. It was, in fact, one of the finest musical productions to have graced our stage in at least the last decade.

As directed by Bobby Garcia, we saw and understood exactly why this show—written by Itamar Moses and scored by David Yazbek—deserved its Tony Award for Best Musical.

“The Band’s Visit” is a true-blue “book musical,” the kind of song-and-dance theater that favors sound storytelling over spectacle; where the singing and dancing aid the narrative, instead of the narrative merely interspersed between musical numbers.

The New York Times called it “an honest-to-goodness musical for adults,” and that assessment is just about right. Very little, in terms of incident, may seem to happen in this 90-minute show, but my, does it open up human worlds and histories as evocatively and eloquently as it illuminates the ordinary and seemingly inconsequential in the lives of its characters.

That, and more, we gleaned from Garcia’s production, its compact yet measured pacing reflective of the wisdom and insight that went into its making. And it wasn’t just Garcia’s direction—everyone involved in this production did topnotch work.

Farley Asuncion’s musical direction was remarkable for its clarity, as for its illusion of simplicity.

Faust Peneyra’s set was of a piece with Adam Honoré’s lights. The deceptively barren walls and sparingly outfitted performance space could have revealed its tricks only through the genius lighting design.

Odelon Simpao’s costumes and Justin Stasiw’s sound design were essential to the seamless creation of the world of this musical, and GA Fallarme’s projections heightened effectively the parts of the show where they were needed.

And that cast? Not a false note: Reb Atadero’s girl-baffled Papi; the easy-to-miss groundedness of Bibo Reyes’ Itzik and Steven Conde’s Simon; Mark Bautista delivering a performance of composed suavity as Haled; even Maronne Cruz’s brief but realized turns as Julia and a bus station clerk, to name a few.

The star pairing of Rody Vera (as orchestra conductor Tewfiq) and Menchu Lauchengco-Yulo (as café owner Dina) was of an entirely different level—two lead performances that glimmered with that rare sort of intelligence, when an actor knows exactly how much to give or withhold in every single scene, and in the process, expand the world of the musical way beyond its perceived limits.

If it isn’t clear enough, yes, if there were such a thing as a perfect production, “The Band’s Visit” was just about it. Very few saw it during its invitational technical dress rehearsals. It was beautiful. It was important. And it should visit us again the moment we get past this pandemic—hopefully soon. —CONTRIBUTED