A hangout with the cast of ‘Never Have I Ever’ | Lifestyle.INQ ❮ ❯ 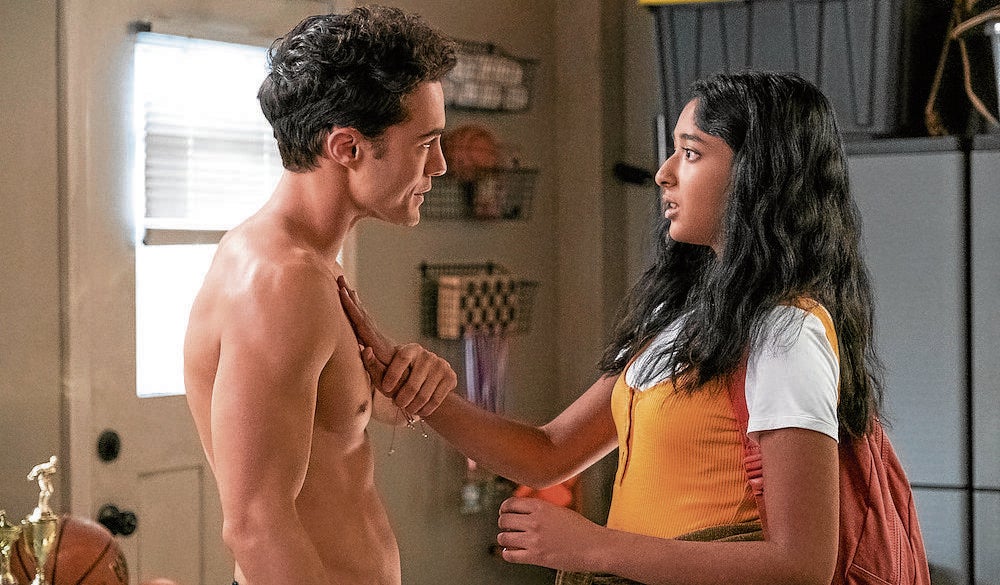 A hangout with the cast of ‘Never Have I Ever’

“You’re a couple of minutes early,” a Netflix representative told Maitreyi Ramakrishnan who had just joined our Google Hangouts session.

That’s very Devi of her, we thought. In “Never Have I Ever,” a new coming-of-age comedy series created by Mindy Kaling and Lang Fisher, Maitreyi stars as Devi Vishwakumar, a super smart, first-generation Indian-American high school overachiever with a short temper and a tendency to get into trouble. The 18-year-old beat out 15,000 other girls who also coveted the role.

“Lang and I had to be really strong and insist that we wanted to have kids who were teenagers,” said Mindy, explaining that shows often cast twentysomethings in high school roles because of labor laws that prevent younger actors from working long hours. But they quickly realized finding their teenage Devi in New York or Los Angeles was going to be impossible, Mindy said. “Indian parents are not necessarily the most encouraging of having their children be actors on TV so the pool is really small, although it’s bigger than when I started in the business.”

They had to do a wider search and found their Devi in Mississauga. “I’m really proud that we found Maitreyi who’s such a gifted performer. She was a high schooler at a public school in Canada,” said Mindy.

“This is my first, not even acting job, this is my first job, period, in my life,” said Maitreyi who was “chilling in Canada” when we talked to her.

Lee Rodriguez, who plays Fabiola Torres, Devi’s other best friend, is part of the session, too but she was having difficulty figuring out Hangouts. “Guys, I need your help,” she said.

“I got you,” Jaren said and their costars joined in, giving Lee instructions so she could get her camera to work.

It was funny watching them walk Lee through the steps of turning her camera and mic on when in “Never Have I Ever,” her character is such a tech wiz that she built a robot friend named Gears Brosnan.

“I just want to say that this happened during the escape room. And it’s happening again,” said Ramona.

“We’re actors, we’re not scientists, we can’t figure this out,” Darren said.

They have even more reasons to cheer now. “Never Have I Ever” premiered on Netflix on April 27, which happened to be Darren’s birthday. “I’m celebrating as a party of one, probably going to Zoom my family members and put on a birthday hat. It sounds really sad but I think it’s gonna be fun,” he said.

Two days later, the show had a 100-percent rating on Rotten Tomatoes and hit No. 6 on the streaming platform’s top 10 list in the Philippines (we’re sure it would go higher). It’s already No. 1 in the United States. That’s crazy fast for a show featuring new talent and no household names… yet.

A lot of eyes are on these young actors. Their social media followers are multiplying by the second, making them the newest batch of teen stars catapulted to fame by Netflix.

There’s no shortage of teen shows but “Never Have I Ever” just feels fresh. It’s quirky, strange, funny, poignant and charming. The characters are complex and layered (and there’s joy in peeling off those layers as the episodes go on) and the adults are just as enjoyable to watch as the teens (Poorna Jagannathan as Devi’s mother Nalini is just wonderful).

“We’ve talked a lot about diversity, and I feel like that’s so important… And the show is also really funny and warm,” Jaren said.

Maitreyi said, “We’ve waited a long time as minorities… I didn’t grow up with a show with a character that had depth to it that looked like me. We were either, you know, the butt end of a joke or the sidekick or we just had one funny line, and that’s it. That’s totally not the story for us and what makes our show really unique is that yes we put minorities up in the front, but also we’re talking about a first-generation story.”

There’s been a lot of talk about how the show is based on Mindy’s life. “I think the most accurate description is that the spirit of the show is based on my childhood,” she said. But Devi is not Mindy, although she agrees that they’re both nerds in high school. “I was definitely not that confident, I was way more shy around boys, although I had a big personality.”

Maitreyi can relate to her character. “She feels too Indian to people around her age and not Indian enough to people who look like her. That was something that totally happened to me when I was going through high school. Now I’m comfortable with my identity and I’m proud to say I’m Tamil-Canadian but it was really complicated for me to figure out… that’s a conversation that many people have throughout their lives.”

Darren relates to his character Paxton as well. “He’s a book very much judged by his cover and that certainly was my experience in high school. A lot of people were like, “Hey, you’re really, really nice but before I met you I thought you were a huge jerk.”

Ramona and Lee can relate to Devi too, especially her desire to date and find love in high school. Maitreyi said, “If I could tell Devi one thing, it would be to love herself. She’s so preoccupied with everybody else around her… If “Never Have I Ever” goes on for seasons and seasons, I would want in the end for Devi to really be OK with who she is and be her own best friend.”

We want more seasons of “Never Have I Ever,” too. For the cast, it would be a chance to work more with Mindy who they all adore.

Lee said, “She was everything that I wished and hoped her to be. She’s amazing. Boss energy to a tee. I remember her saying that she’s allowing us to have our own process, that we were all chosen for a reason, which I thought was really really awesome.”

“She’s probably one of the warmest people you’ll ever meet, she’s genuinely kind,” said Jaren. “And then when it comes to work, she always gives us room to play. The ability to have freedom and make different choices creates the most honest performances.”

Darren said, “Mindy is so amazing and she’s so soft spoken, but she’s such a powerful woman and such a creative force that… I don’t know, I would just never want to see her pissed off.”

“I kinda wanna see her be pissed off because she would just be a whole storm,” Maitreyi replied.

“I would just shut down and cry,” Darren said.

“Never Have I Ever” is now streaming on Netflix.

NEVER HAVE I EVER…

Ramona: “Never have I ever done a full handstand.”

Maitreyi: “Never have I ever been able to properly swim.”

Darren: “Every time I watch the pool scene I was like…”

Jaren: “Never have I ever done a front flip or a backflip. Can’t do it. I wanna do it so bad. I cracked my head on a diving board trying to do it in a pool one time, too.”

Lee: “Never have I ever climbed a tree.”