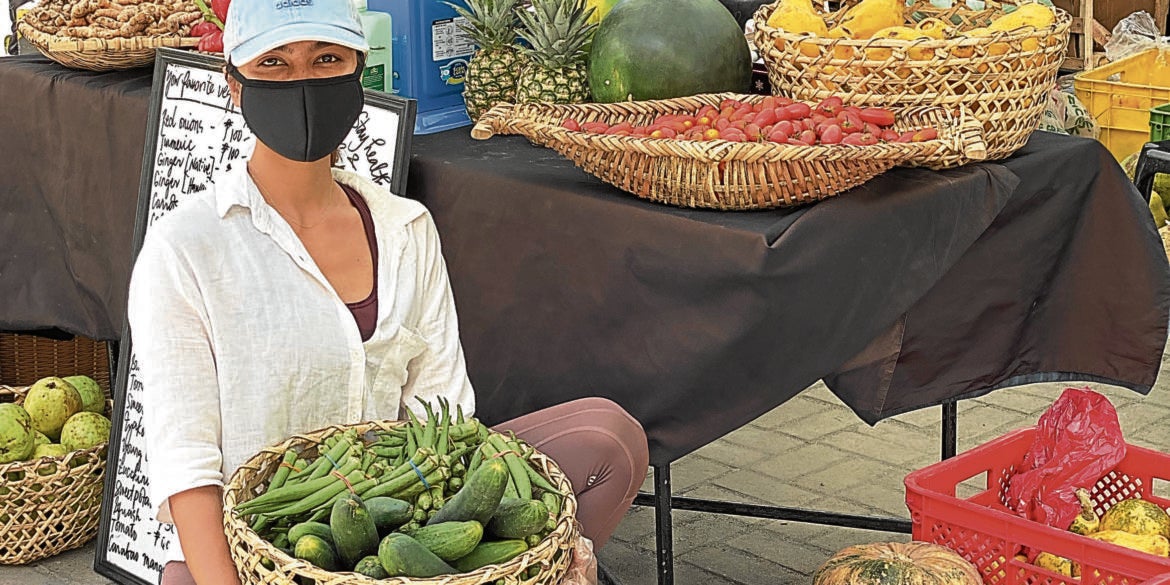 In one out-of-town shoot for Lifestyle last summer, our host Milo Naval of Siama Surf brought us to Tikling Island in Matnog, Sorsogon, for a needed respite. The whole team went along, including regular Lifestyle model Alaiza Malinao.

The island had a handful of residents, including a family with a small farm and a herd of domesticated wild boars. Most of the team just watched the boars, afraid to be attacked—but Malinao was instantly drawn to them, and started feeding the piglets with coconuts.

After a few moments we lost sight of her, as she began exploring the area; we saw her cutting foliage with a bolo and herding more boars. The team was worried at first, but ended up laughing, realizing Malinao was in her element; she grew up on a farm in Davao del Sur, after all.

Earlier this year, Malinao joined Miss Universe Philippines 2020, now headed by Shamcey Supsup, along with designer Albert Andrada and pageant aficionado Jonas Gaffud. She became the official candidate representing Davao. Through Miss Universe Philippines, each candidate gets to promote an advocacy, and for Malinao, it was an easy choice: raising awareness for the local farming and agricultural industry.

“I went out of my way to find people who could educate me about sustainable farming. I also want to give our farmers the dignity due them by constantly speaking about them; I joined to represent them,” Malinao recalls.

She wanted people to understand the plight of farmers. “We have to look out for them, as most of our farmers are aging and there are not many from the younger generation who would like to continue, because of the misconception that being from the agriculture industry means being poor.”

But there is wealth in farming, explains Malinao. “If you know how to farm, you don’t have to depend on other people for your food security.”

She cites a BusinessWorld article, “Plant camote: An economic recovery plan.” Author Calixto V. Chikiamco notes that when there’s a crisis, agriculture is the way to go. “It doesn’t only mean that you won’t go hungry if you go to agriculture, but agriculture should be the foundation of development,” Chikiamco says.

Malinao comes from a long line of copra farmers in Davao del Sur. She spent most of her childhood in her father’s copra farm, where she would walk the distance just to take a bath, as there was no running water in their home. She would help in the copra farming to get an extra allowance. “I never saw it as being poor; to me, it was a meaningful adventure.”

Working on the farm helped Malinao learn the value of resilience and hard work. “Farming is definitely not easy. Clichéd as it may sound, it’s really blood, sweat and tears.”

She knows only too well the high physical and emotional toll on farmers, just to bring food to people’s table, but often, they can’t even put food on their own tables. “That’s injustice for me,” she says.

When lockdown gripped the country, people suddenly realized how important food security is. Like the rest of us, Malinao had to come to terms with what was happening. She started to help farmers affected by the lockdown after news spread that farmers had to dispose of their produce because they couldn’t bring them to the market.
“At first I did not know how to help. I needed to stay home.” But Malinao reached out to Cherrie Atilano of Agrea, a social enterprise that aimed to help farmers and fisherfolk through sustainable means. Initially, Malinao started by booking a truck for Agrea’s #MoveFoodInitiative, which delivered produce within the Metro. Wanting to do more, she has since been using her social media (her Instagram, @alaizamalinao, has 74,000 followers) to amplify Agrea’s other initiatives.

Recently, Agrea and other produce sellers partnered with Mercato, a food market operator in BGC, to help sell fresh produce. Malinao explains further Agrea’s goal of delivering as much produce and helping as many farmers as possible. Malinao even volunteered to man the stall in Mercato, since she lives in the area.

She arrives at 7:30 a.m. to set up, and creatively curates the vegetable arrangements to make the stall more inviting for customers. “I’m not just helping the farmers, but in my own little way I have contributed to helping the community keep healthy by selling them fresh vegetables.”

Home gardening or farming in one’s backyard sustainably is another of Malinao’s advocacies. “Learning how to grow your own food is one major skill everyone should have,” she says. Having food security curbs the tendency to panic buy, and gardening definitely helps one’s well-being.

Sustainable farming is the future, she adds. “Sustainable farming can help us preserve the interconnectedness between people and the environment. That’s what we need after COVID-19 (new coronavius disease). We have to change our way of living and consuming.”

Putting up a sustainable garden in her community in Davao is one of Malinao’s plans, “a farm where people can learn to grow food and have a place to grow it, too.” She adds that most of their farmworkers know how to take care of animals, but don’t necessarily know how to grow food.

But Malinao admits she still has a lot to learn. “I am still trying to assess how I can be an advocate for agriculture on a national level.” She wants to know all she can about all aspects of agriculture, especially to help farmers in this time of pandemic.

When she came home from Los Angeles after spending a few years there as a model, Malinao was looking for a purpose. “I realized a lot of things had changed in my life after working as a model, but when I went back to my hometown, it was the same as how I left it.”

Joining Miss Universe Philippines only reaffirmed what she really wants to do. “I want to put myself out there to help the plight of farmers and promote agriculture as a wealth generator, especially for people in the provinces.”

After being officially crowned Miss Davao, she realized how her network in the agriculture industry has widened. Malinao has been meeting people with successful farm businesses and organizations like Agrea that teach good farming practices.

“I don’t have to explain anymore, because people now realize how important the agriculture industry is. Material things are frivolous if you don’t have anything to eat.” INQ