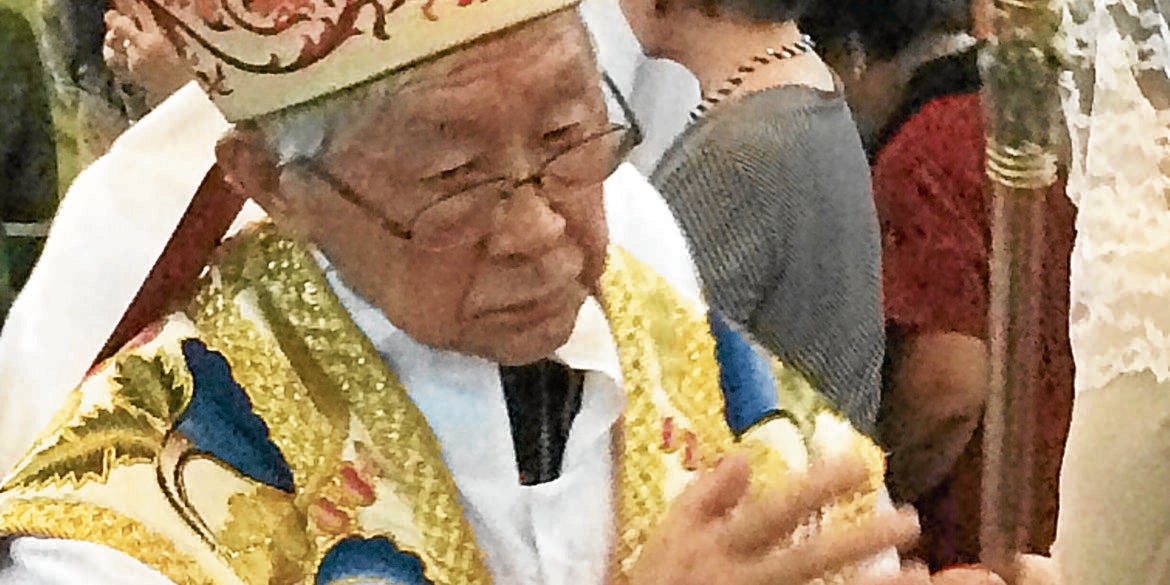 Cardinal Joseph Zen during the 51st International Eucharistic Congress in Cebu in 2016. —PHOTOS BY LITO ZULUETA

“The fact is [the] pandemic started in China and it spread quickly over the whole world,” said Zen in his blog article which was also published on United Catholic News. “China has become a threat to the world.”

He said China’s wealth and power were fueled by globalization for which it got a lot of help through investments and cooperation from Western countries “until they realize they were accomplices in nourishing a dangerous monster.”

Earlier, Zen supported the unprecedented statement of Burmese Cardinal Charles Maung Bo, president of Federation of Asian Bishops’ Conferences, who called communist China “a threat to the world” for its “inhumane and irresponsible handling of the coronavirus.”

Bo said communist authorities reprimanded doctors who raised the red alert about the new virus and suppressed the news by citizen journalists, some of whom went missing later.

Once the news was out, the Chinese Communist Party (CCP), according to Bo, refused offers of help from other countries and even the World Health Organization was “sidelined.”

The CCP later accused the US Army of causing the pandemic. “Lies and propaganda have put millions of lives around the world in danger,” he said.“This regime is responsible, through its criminal negligence and repression, for the pandemic sweeping through our streets today,” Bo declared.

While the Myanmar cardinal distinguished between the CCP and the Chinese people, Zen in his new blog article seemed to blame both “nation” or state and the “people” for the pandemic, which has already killed 328,000 people out of more than 5 million infected around the world.

Zen said China might have become “rich and strong,” but its people “don’t get a fair share of its prosperity.”

“In China the people are slaves [under the CCP],” he said. “Slaves are not allowed the luxury of dignity. Under the dominion and bad example of their masters, the Chinese people have lost their traditional virtues. In a world struggling for survival, they make recourse to lies and violence, just like their masters.”

The article is an edited version of the talk he gave in a recent online video conference in Hong Kong on “Post-Pandemic Humanity.” Zen participated in a panel discussion on “Post-Pandemic Globalization: The Role of China and the United States—Analysis and Action.”Zen said the “pandemic of apocalyptic dimension” was a “tragic reality.”

He said the swift spread of COVID-19 owed to “globalization,” because the pandemic could be explained by “the enormously increased mobility of people.” But it’s also true that globalization could have prevented its spread since “the modern progress in communication could provide timely alarm and contain the spreading.”“Obviously something went wrong,” Zen said.

Zen likewise cited the late Pope Paul VI’s statement that “real progress is when everybody progresses and the whole human being progresses.”

He said countries that supported China’s globalization and economic progress now “realize that they were accomplices in nourishing a dangerous monster.”

‘One Belt, One Road’

He indicated that the “step” is taken by the CCP through its “One Belt, One Road” project, which seeks to reconstruct the ancient Silk Road across some 64 countries from Central Asia up to Turkey right at the doorstep of Europe.

Zen said that China would “lend” the money to countries wanting to build their infrastructure under the “One Belt, One Road.” China would also provide “expertise” and “workers,” which of course would have to be paid by the loan. “That means borrowed money goes back to China,” he pointed out.

“When they are not able to pay back the money, they are requested to pay with monopoly rights and privileges, or even concession of territories and ports [for 99 years],” Zen said.

The Hong Kong prelate declared: “The new colonizers are worse than the old ones!”

Zen said the “world disaster” of the pandemic “is an awakening for everybody.”

Against China’s “lies and violence,” the world should uphold the truth, he said.

“Now we realize how more important is the truth, our right to information and the freedom of expression,” he stressed.

The world’s rapprochement with China and turning the other way around on its human rights abuses has always been criticized by Zen.

In his newest book, “For Love of My People I Will Not Remain Silent” (Ignatius Press, 2019), Zen criticizes the Vatican’s Ostpolitik with the CCP.

Subtitled “The Situation of the Church in China,” the book collects the lectures Zen delivered to mark the 10th anniversary in 2017 of Pope Benedict XVI’s 2007 Letter to Chinese Catholics, which outlined what was then the Vatican’s policy on the China Church and how to normalize relations with the communist state.

But the letter has been superseded by the 2018 agreement between the Holy See and Beijing which basically recognized bishops appointed by Beijing while undermining the bishops who had remained loyal to Rome despite communist persecution.Zen has denounced the agreement as “an incredible betrayal” of the Chinese Catholics loyal to Rome. “They’re [sending] the flock into the mouths of the wolves,” he said.

Zen blamed Vatican Secretary of State Cardinal Pietro Parolin and the advisers of Pope Francis for the agreement, which hasn’t been published in full.

“The consequences will be tragic and long-lasting, not only for the Church in China but for the whole Church because it damages the credibility,” he said.

The 2017 lectures as collected in “I Will Not Remain Silent” warn against Ostpolitik.

Zen writes that while Ostpolitik worked for West Germany in dealing with the Iron Curtain of the Soviet Union and Eastern Communism (Ostpolitik means policy toward the East), for the Church dealing with China, it has been “a failure.”

He explained that this is because China considered the thawing of relations and rapprochement as a sign of weakness on the part of the Church and the international community. He said communist China understands only power. If the other side shows willingness to talk or even look the other way around when the communists commit abuses, China will consider that a sign of weakness and “it will attack.” If the other side shows strength, China will be more cautious, Zen explained.Zen said the wages of the Vatican’s Ostpolitik with China could be shown during the Hong Kong prodemocracy riots when the Vatican was noticeably silent.

“How sad it is to see our children beaten, humiliated, arrested and prosecuted. In the face of such injustice, several governments have spoken out despite risks to their economic interests in China. But there has been a corner of resounding silence. In all these months of demonstrations, the Vatican has not uttered a word of criticism toward Beijing.

“This is regrettable—but should not come as a surprise. The line followed by the Vatican in recent years when dealing with the threatening China giant has been appeasement at any cost.”

In “I Will Not Remain Silent,” Zen warns that the Church might lose credibility by kowtowing to Beijing:

“Aren’t the gentlemen in the Vatican saying that the purpose of an agreement is to favor the evangelization of the great nation? Let them remember that Communist power is not eternal! If today they go along with the regime, tomorrow our Church will not be welcome for the rebuilding of the new China.” INQ