Quarantine Reading: 5 tips on how to navigate ‘One Hundred Years of Solitude’ | Inquirer Lifestyle 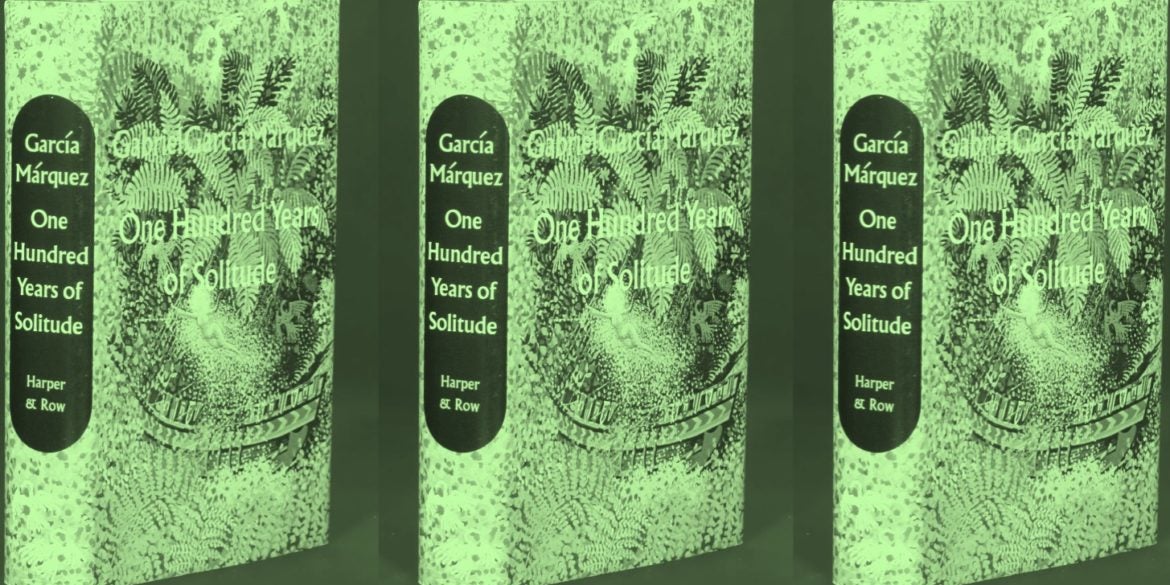 Quarantine Reading: 5 tips on how to navigate ‘One Hundred Years of Solitude’

I first picked up my copy of Gabriel Garcia Marquez’ One Hundred Years of Solitude in 2016. Autobiographically, I just left a job that friends thought I was crazy to quit. Ultimately, it was a decision about choosing creative freedom over other considerations that were not as important to me. Thankfully I had enough savings to go on a short sabbatical and hit the restart button. I do not remember the exact circumstances of its eventual purchase, but it’s not hard to imagine that One Hundred Years of Solitude would be something I’d be keen on reading that time. It must have felt like both a task and an adventure.

It’s one of those very popular, canonical books that never disappear from the bookstore shelves. It says “Winner of the Nobel Prize” on the cover. Mine had this blurb from the New York Times Book Review: “One Hundred Years of Solitude is the first piece of literature since the Book of Genesis that should be required for the entire human race.” Not having read it all these years felt like a betrayal to culture. And, anyway, I was looking at a lot of free time in the horizon, and the sudden freedom from responsibilities that have, for me, become more cumbersome than enobling. Responsibilities have become distractions.

For some reason, though, I never really read it. I’d read a couple of pages and stop, forget about it, then restart from the beginning. I don’t recall what I did end up reading that year, but I guess I just wasn’t in the mood for the adventure I initially imagined I would undertake. The book sat on my shelf for years. Four to be exact. It was only some weeks ago, deep in the existential abyss of lockdown, that I had a revitalised interest to pick it up again. The world is a different place, but as it was around this time in 2016, I had a lot of time and less distractions, this time from the outside world.

I recommend that you pick up and read One Hundred Years of Solitude. It will be an adventure, I promise.

To get your reading going, below I list five tips on how to navigate One Hundred Years of Solitude.

Acquaint yourself with something called magic realism. It is a literary genre “characterized by the matter-of-fact inclusion of fantastic or mythical elements into seemingly realistic fiction.” In the magic realist ethos, the supernatural is embedded into the fabric of life. What do you do when, during the course of your reading, as you scratch your head wondering if something really happened or not, you find yourself studiously figuring out the boundaries of fact and fiction? The best strategy might be to let the mystery be (quoting the Iris DeMent anthem), because One Hundred Years of Solitude is less a mystery to be solved than it is a string of singsong parables of precarious morality, a sprawling historiographic lore of a lost Atlantis.

Know its primary character. I don’t mean the OG Jose Arcadio Buendia—although the story begins with him and, specifically, a cockfight and a haunting—but instead Macondo, the fictional town in which the novel is set. So it’s not technically a character, but among the cast of characters that come and go, live and die, and the occasional allusions to farther lands, Macondo is nonetheless the one coordinate that never shifts, the novel’s celestial pole. One Hundred Years of Solitude is foremost a story about a place, told from the point of view of a dynastical clan; it is a patriotic record of contentious births, sexual tribulations, and seemingly looping patterns of leaving and coming back home. The novel begins with Macondo’s founding, and ends there, too.

One Hundred Years of Solitude is a patriotic record of contentious births, sexual tribulations, and seemingly looping patterns of leaving and coming back home.

The family tree is useful, or maybe not. One thing to know about the Buendias is that they have a penchant for giving their children the same names across generations. For example, “seventeen Aurelianos” will gather and scatter in the story at some point. Although this may be the case, I never had to consult the family tree provided on the outset of my edition of the book. One Hundred Years of Solitude unfolds with a feverish continuity of sufficiently idiosyncratic characters that actually make them easy to remember, notwithstanding their same names. Instead of keeping a rigorous mental track of who is who, I find that it’s more enjoyable to meet the characters as they meld with each other in specific junctures.

Expect a politically-charged epic. It’s something you’ll already get a hint of in its first line: “Many years later, as he faced the firing squad, Colonel Aureliano Buendia was to remember that distant afternoon when his father took him to discover ice.” While One Hundred Years of Solitude is often spoken of as a grand, fantastical tale, at its core are martial law, armed rebellions, and many violent deaths. Amid cheerful episodes of family life looms a foreboding that is cemented to Macondo’s foundation stone.

A marathon or a sprint? I reckon you can finish One Hundred Years of Solitude in one devoted sitting. Once you have acclimatised to its many charms, it is not difficult to feel at home in its pages. It is sometimes slow like a Sunday, but it is also often rhythmically pointed, like a waltz. I read it leisurely for a week. Having a Macondo episode to look forward to everyday was a great quarantine tonic.