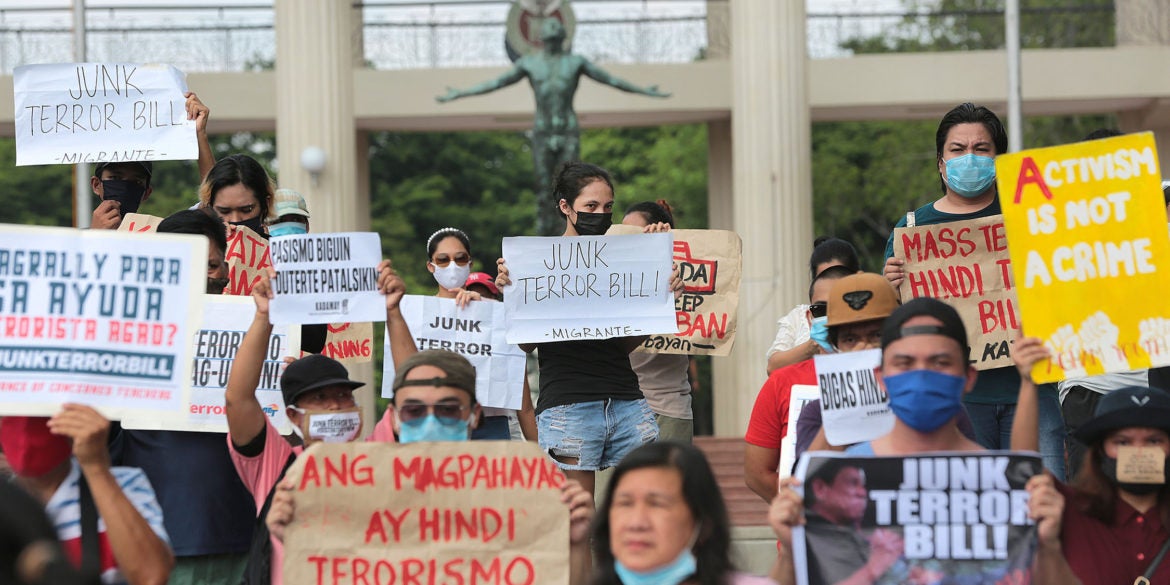 JUNK THE ANTI-TERRORISM BILL / JUNE 3, 2020 Progressive groups stage a protest at the University of the Philippines in Diliman, Quezon City on Wednesday, June 3, 2020 to demand the scrapping of the anti-terrorism bill which was approved in Congress on its 2nd reading on Tuesday. INQUIRER PHOTO / GRIG C. MONTEGRANDE

Students cry: ‘Activism is not terrorism’

The antiterror bill has been causing terror for days.

On June 3, 173 members of the House of Representatives voted for the bill on its third and final reading; the version matched the Senate’s, which was passed in February. Only the President’s signature is needed for the identical bills to be signed into law.

The controversial and poorly worded bill has caused alarm, as it could be abused and used as a means to silence critics of the government.

The hashtags #JunkTerrorBill and #JunkTerrorBillNow have been trending for days, with people denouncing the bill and the politicians pushing for it. What some student organizations and school publications say:

Ateneo Human Rights Center (AHRC) expresses grave concern about the legislature’s seemingly hurried plan to pass the proposed bill. Not only is such move ill timed; it also validates the people’s suspicion that such haste is intended to mask certain provisions of the bill, which infringe on constitutionally protected rights and freedoms.

The passage of the antiterror bill is a glaring attempt to weaponize the law to silence critics and further suppress lawful dissent. The attempt to use the antiterror bill as a tool for repression rather than for thwarting terrorism is appalling. While any form of terrorism is unacceptable, national security can never be at the expense of the fundamental rights and freedoms enshrined in the Constitution.

AHRC appeals to the members of Congress to reject this piece of legislation. —Ateneo Human Rights Center

Activism is NOT a crime! Fight for our democratic rights. —Agham Youth, University of the Philippines (UP) Diliman

Instead of focusing on [stopping] the pandemic through mass testing, medical solutions, additional financial assistance to the poor and prioritizing the safety of the people, the government still… rail-road[ed] the (antiterror) bill…

The [new law will] only give the administration elbow room to interpret its provisions, making [it] prone to abuse.

Activism does not and will never amount to terrorism. To dissent is to uphold the values of democracy; it is and will forever be essential to national democracy.

The PUP (Polytechnic University of the Philippines) campus journalists strongly condemn the antiterror bill and the administration’s obvious efforts to suppress its critics, which pose great threat to basic human rights [such as] free speech.

There is no room for oppressive polices nor fascist attacks especially during a time wherein the medical needs of Filipinos are of utmost importance. We call on our fellow youth to continue to demand and fight for people’s rights! —Campus Alliance for Dedicated and Unified Action, UP Baguio

We, the councils, organizations and publications of the University of the Philippines Manila, stand united against the Duterte administration’s rule of terror, recently exemplified in the fast-tracking of the antiterror bill. While the rest of the nation looks on the government to address urgent needs [of the people], Duterte and his minions are bent on intensifying [their] control and power over the people’s civil liberties.

With its overbroad and vague definitions of acts of terrorism and the [lack of] accountability from the state, Duterte’s antiterror bill can be easily weaponized not just to silence dissent, but to heighten the people’s fear. The increasing illegal arrests and harassment of progressive individuals, the merciless killings of members of organizations [critical of government], and the attacks on mainstream and alternative media are all predictors of the government’s impending abuse of the antiterror bill.

If passed into law, the antiterror bill will provide the government more legal backbone to bypass and disregard our constitutionally guaranteed rights. The bill’s overbroad definitions could be easily abused not merely to silence dissent, but to endanger the people’s lives. Even our institutions that enshrine academic freedom will be at risk from government control and interference…

We call on the all members of the UP Manila Community and the rest of the nation to join in opposing… the antiterror bill. We also call on our lawmakers to redirect its efforts [from consolidating] Duterte’s authoritarian regime to [the crafting of] laws that will support the people’s needs amid the ongoing public health crisis.

May we remain unwavering in holding the government accountable and in safeguarding our rights from the very entity that is supposed to shelter us. —Youth Movement Against Tyranny, UP Manila

Sanggunian ng mga Mag-aaral ng mga Paaralang Loyola ng Ateneo de Manila firmly condemns the recent approval of the antiterror bill… We believe that in the hands of an administration that has consistently worked toward silencing the opposition by Red-tagging progressive groups and individuals, the bill can be easily weaponized to enable authoritarian and totalitarian measures in curtailing dissent.

The vagueness of the definition of “terrorist” can be used not only to Red-tag, but to arrest—threatening the lives and security of our fellow citizens. In this time of pandemic, if the people clamor and demand efficient contact tracing and mass testing, the government can spin this as an act of terrorism to stifle the dissent and dissatisfaction of its people…

It is clear that this bill threatens the privacy, safety and the very democratic freedoms of Filipinos which were already rendered fragile for years by the aggressive atmosphere of the current administration…

Regardless of intention, the antiterror bill increases the propensity for state abuse…We, Ateneo Sanggunian, along with the different organizations of Ateneo, believe that activism and protest do not equate to terrorism. Dissent is not a crime…

With the rise of [state] actions aimed at curtailing free speech, such as the closure of ABS-CBN, we see this as another step at creating a de facto police state that silences those fighting for their rights and for democracy. This affects the most vulnerable members of society who demand government action…

This harkens back to the martial law era, when people could not protest and speak out on the threat of their lives. This bill, if passed, would bring us back to that dark time in our history when activists and advocates who protest the antipoor and anti-Filipino actions of the government are automatically labeled as subversive, insurgents and enemies of the state.

We strongly urge the House of Representatives to reject this bill and to abolish the 2007 Human Security Act. With the interest of the Filipino people in mind, we, too, call on everyone to oppose it and to continue speaking truth to power!

We must never let tyranny and fear rule.

A time when activism is most threatened is when it is most needed. —Sanggunian ng mga Mag-aaral ng mga Paaralang Loyola ng Ateneo de Manila

‘We will not stand still’

The Spectrum, the official student media corps of the University of Saint La Salle, along with the other Lasallian publications, resolutely denounce the passing of House Bill No. 6875 or the Anti-Terrorism Act of 2020 into law.

The act stipulates that anyone deemed as terrorists by the Anti-Terrorism council can be arrested without a court-issued warrant, authorizing politicians to exercise powers that are solely granted by the Constitution to the courts. We perceive this as a clear overreaching on checks and balances, prone to abuse of powers and suppression of the people’s substantial freedom. The act allows the government to bare its fangs to the individuals who show the slightest expression of dissent and opposition: a warning to silence the people engaged in critical perspectives and activism.

Amid the raging turmoil brought about by the new coronavirus disease pandemic, with the nation heavily handicapped and at a standstill, the administration has pegged the proposed bill as “urgent.” It is as though the government prioritizes the antiterror bill over measures that will mitigate and solve the problems brought by the pandemic.

As student journalists and publications, we will not stand still and watch as our freedoms and rights, granted by the democracy that this nation runs on, are once again subject to possible and eventual repression. —The Spectrum, University of Saint La Salle

During this dark time, we remember UP students, activists and martyrs who were abducted and remain missing—Karen Empeño, Sherlyn Cadapan. All unsung heroes during martial law. All [of them] who chose to fight for the people.

NO MORE. NEVER AGAIN. #JunkTerrorBillNow —UP Office of the Student Regent