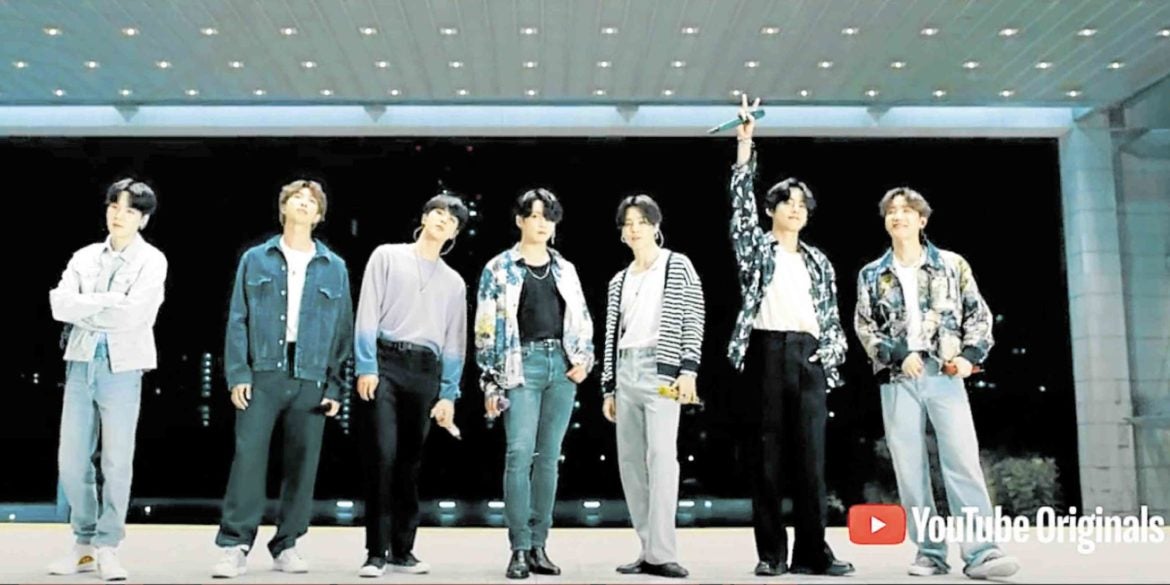 In high energy and high fashion, today’s hottest band gives messages that resonate with the young—and the old—worldwide

As one entertainment writer put it, it would have been a big mistake if the organizer YouTube didn’t include BTS among the speakers and performers for “Dear Class of 2020,” the global commencement “exercise” livestreamed on the channel last June 7, Sunday, or early Monday morning in Manila. (As of press time, YouTube views of BTS speech, more than 7 million; of their post-speech performance, 13.5 million.)The celebrities, led by former United States president Barack Obama and wife Michelle, included Beyoncé, Tom Hanks and Lady Gaga.

Still, probably because of the youth of this Korean pop band—members’ ages range from 22 to 27—their messages, mostly delivered in their native Korean, shone with sincerity, and have been shared extensively on social media. Denny Directo, a producer and host on ETNow entertainment channel, retweeted a screen grab of BTS member Jimin admitting he was worrying about people’s health with the caption, “Jimin doing a wellness check.”

“To be really, really frank, we still feel very unsure and unsettled as we speak,” said 26-year-old BTS member RM (Kim Nam-joon), the group leader and translator, who speaks fluent English. “ . . . Some say we have achieved so many things, but we stand no different from any other youth in their 20s . . . awkwardly peering into the face of reality . . .

“It’s been a strange year so far, but you made it . . . the most special graduation ceremony in history,” RM noted, recalling his own snowy middle school graduation in 2010, and how he kept his photo with friends from that day as his Messenger profile pic for the next few years.

Dressed in formal black jackets against the sparkling background of the National Museum of Korea, members took their turns delivering their messages, consistent with their own personalities. Fans noted how the wild hair color, funky outfits and even the dynamic trademark choreography were set aside in deference to the event and the venue.

Even in their accompanying performance of three songs, the boys dressed down, choosing pastel suits and shirts, and just adding edge in the last number as they donned shirts and jackets by Lanvin, Saint Laurent and Louis Vuitton.

Youngest member, Jungkook (Jeon Jung-kook), 22, who was 15 when he started training with the group, recalls how his fellow BTS members “were there throughout my high school years,” and even attended his high school graduation ceremony. “When did you get old enough to graduate?” they asked him, Jungkook recounts. “Did that boy really grow up to be me? . . . I feel like I’ve come a very long way.

“I continue to learn new things . . . and so here I stand today, with my members, with faith in myself, my members and the world. And I hope you also will do the same for yourself and move forward.”

Jin (Kim Seok-jin), at 27 the oldest BTS, finished high school before he joined the band. “Back then the notion of becoming an adult was something quite scary . . . I was anxious about making my way in an unfamiliar world, I was cautious of everything I said and did.”

The lessons he shared were from his rigorous training with the group, where Jin is often the butt of jokes for his awkward dance moves.

He admitted to studying the choreography earlier than the others, so he could catch up. “Sometimes I’d feel restless watching my friends go on far ahead of me . . . I soon realized their pace was not my own. What held me together during those times was a promise I made to myself to take it slow.

“If any of you feels lost in the face of doubt or uncertainty or the pressure of starting anew, don’t rush. Take a deep breath. You may find that any moment can be turned into an opportunity.”

Suga (Min Yoon-gi), at 27, is the sardonic, straightforward songwriter in the group, respected by the younger members for telling it like it is. “These days, I feel as though I’ve fallen to the ground during a race,” he admitted. “This may not be the grand finale that you imagined, and a fresh start may seem far away.”

The silver lining: “There are some things you can only do in isolation, such as focusing only on myself and breaking my own barriers . . . Take your hands off what you can’t control, and get your hands on what you can change . . . because the possibilities are limitless,” he told graduates seriously, before smirking, “After all, I had no idea I would become BTS, either!”

Jimin (Park Jimin), 25, brought up concern for young people’s health. “I am worried for everyone . . . during a time when nothing seems to go as planned.”

Fans noted how his affectionate manner supported BTS’ consistent message of self-care and mental health awareness. “We are all in different parts of the world, in different environments and circumstances, but I hope in this moment, we can all give each other a warm pat on the back and say, ‘It’s okay.’ Remember there is a person here in Korea, in the city of Seoul, who understands you.”

“I’m not much different from all of you,” said star dancer J-Hope (Jung Ho-seok), 26. “At times I feel as though I’ve reached a dead end as I perform and make music . . .

“There will be times in your life when you will question your own decisions . . . whether you are doing well or walking the path of failure. And when you do, remember: You are the leader of your own life.”

Finally, V (Kim Tae-hyung), 25, delivered an insightful message of resilience and trusting one’s own instincts. “Many of us are at war with reality right now. But I hope we can take bits of this moment with us, in a photograph or a memo, to look back to and remember June of 2020, and how it compares with the new today you will be embracing.”

V recalled how he was not a natural singer and dancer, but with practice, “I soon developed a joy for singing and dancing. This joy motivated my persistent efforts . . . If there is anybody out there who cannot see where they should go from here forth, I urge you to listen to your heart.

“Years from now, I will remember this (day) as a memory to treasure. And I will look forward to the day you will stand and tell us your own story.”

RM concluded that, as musicians under quarantine, the boys stayed sane by “making music—we write songs, produce and practice as we think of the people we love . . . With music, we hope we can bring you smiles and courage again.”

And with that, the “biggest band in the world” threw their caps into the air, cheered and jumped around, just like regular graduating kids would.