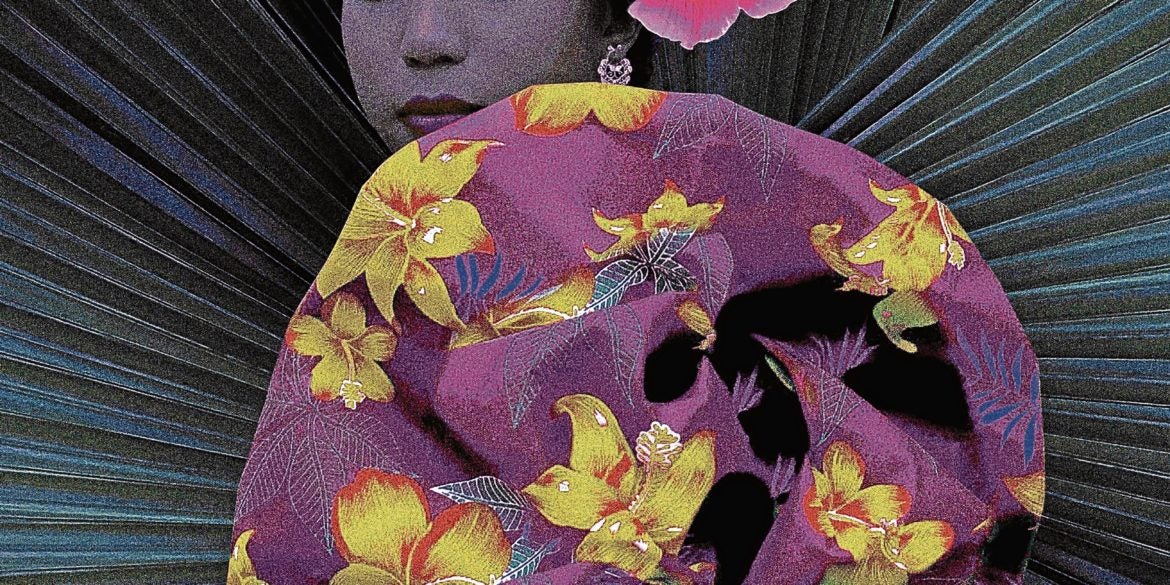 Stuck in Aklan, the London designer recreates the national dress to find deeper meaning in his roots and culture

I am working night and day to keep sane,” Lesley Mobo said during our online chat.

The fashion designer created tropical-print ternos, some exclusively for Lifestyle, during the lockdown in his home province of Aklan. He was supposed to fly back to London where he’s based, but because of the pandemic, he had to stay put.

His output is a number of brightly colored ternos with draped butterfly sleeves in tropical prints. He used waxed cotton fabrics he found at home, which were originally meant to cover tables. “These are mostly in exaggerated proportions for editorial effect, but can be easily simplified into daily wear,” he said. Mobo also styled and shot the collection.

“Making ternos came naturally to me, as I found it very addictive and I couldn’t get enough of it,” he said. Early this year, he mentored young Filipino designers for TernoCon, a terno-making competition and convention organized by Bench and the Cultural Center of the Philippines. The work had a massive impact on him.

Mobo is versatile enough to work in any fashion landscape. “During the lockdown, I felt it would be interesting to challenge myself and focus on one thing I am passionate about. I decided it was the terno,” he said.

He moved to London in May 1999 to study at Central Saint Martins, and took both his Bachelor’s and Master’s in Fashion under renowned course director and professor Louise Wilson, who also molded British designers like Alexander McQueen and Christopher Kane.

Mobo recalled how, as a fashion student, he would sew garments during the evenings in the living room where he stayed and slept, and would keep them under the couch in the daytime so as not to disturb anyone. This, while juggling work as a cleaner after school from 8 p.m. until 4:30 a.m.

During the lockdown, he tried to make a terno every other day, while also doing farming and fishing duties.

Mobo said he is easily touched by strong visuals. “I believe in the power of strong images and their effect on people.”

One of his references for his terno was the iconic black-and-white Metro Magazine 1994 issue cover of a young Angel Aquino in a Ramon Valera top with a Commes des Garçon skirt. “That cover for me is very Filipino at its best, and despite being shot more than 20 years ago, it still looks very current.” (It was shot by Neal Oshima and styled by Michael Salientes.)

For his own shoot, Mobo referenced his Aklan roots. “I have always been a country person, so I’ve always had this closeness to nature; it is almost impossible not to be inspired by it.”

He got local girls from his village, specifically the Aeta or ati and Badjao folk, as models. “We have so many interesting people in the Philippines,” he said.

The girls, he said, were initially perplexed that they were chosen for the shoot, since they do not conform to the “conventional” western notion of beauty. But Mobo wanted to make a statement through his creations. “We have a generation of girls obsessed with bleaching their skin with whitening products. We have to decolonize ourselves,” he said. “Look in the mirror and dismantle our own generational traumas.”

Our history of colonization and the traumas that came with it created the deepest, most damaging kind of cultural shame, Mobo noted. “We have to keep reminding ourselves of who we really are as Filipinos, and I think those dark-skinned girls are a good image to represent that.” He gifted the ternos to the girls as a memento.

On Instagram, a Filipino in the United States wrote on Mobo’s terno photo, “Seeing this image today brought . . . tears to my eyes. I’m in New York now and the homesickness that surged through me was unlike anything I’ve experienced before.”

Mobo believes that this pandemic has changed the world and our view of it. “Our sense of self generally comes from the world around us, and right now, I am finding another version of who I am.”

He said that the fashion industry now isn’t to be restored, but to be reinvented. “Obviously the existing system does not work anymore, and it needs new ways of doing things.”

As for his fashion career, he said, “I am certainly going to continue doing fashion until I die—even if that sounds like a fashion victim.”

But Mobo prefers to be selective at the moment. “I want everything to be special. I have very select and happy clients at the moment, and have a lot of waitlisted ones as well.”

He is still open to selling internationally again, but now is not the right time. “I wanted my fashion side to be a bit low-key, personal and manageable—more focused on creating.”

Having a creative outlet in these times, he said, saved him. “Creativity allowed me to dig deeper into my own roots and culture, and created new narratives which allow me to find pleasure, pride and deeper meaning. Besides, one cannot retire from creativity.”—CONTRIBUTED