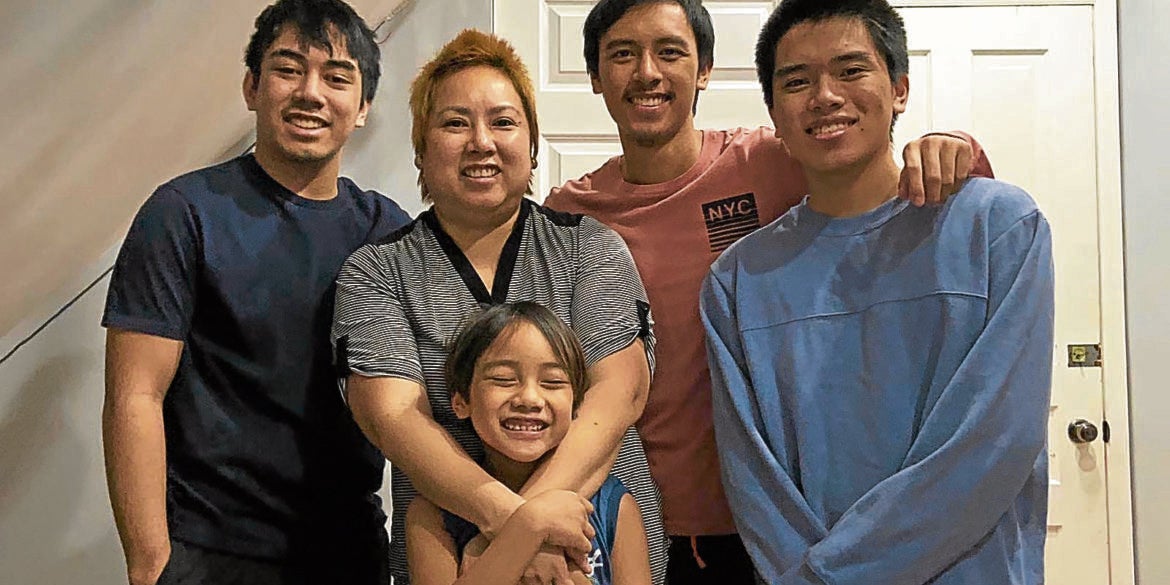 ‘The pandemic helped me teach them that as long as we have each other, we will be fine’

Tricia Manaog moved to the United States years ago and has been working in nursing homes, even in part-time jobs. In Chicago where she and her four sons are based, she has been working as admissions coordinator in the nursing facility Paul House & Healthcare Center since 2007.

When stay-at-home orders were announced in March, she continued to report for work, where she is responsible for overseeing the paperwork of incoming patients.

Manaog is also the point person for social workers of patients who might need the center’s services like short-term rehab (post-op), assisted living, long-term care and memory care.

The only time she worked from home was a week in April, when she was waiting to get her new coronavirus disease (COVID-19) test result after an outbreak in the facility. She tested negative.

“My day starts at 6 a.m. when I prepare breakfast and lunch [to be reheated] for my sons,” said Manaoag. “On Tuesdays, Thursdays and Fridays, I do virtual learning with my first grader before going to work.”

In the office, she checks emails and responds to priority ones. She checks the census, which indicates how many residents are in the facility by midnight.

The rest of the day is spent dealing with mounds of paperwork—referrals or packets from social workers containing patients’ demographics, insurance information and clinical needs.

By day’s end, she’s raring to go home to her sons, whose ages range from 7 to 21. Her eldest, Earl Justin Bart, is an exemplary kuya who has taken on the role as the man of the house. The college junior watches over his brothers Denzig Ioram (18), Juan Lorenzo (16) and Tatum (7) while their mother is at work.

“With this pandemic, I make sure to sanitize everything before entering the house. I have this laundry basket by the main door and a bin where I put all my stuff from outside and another bin where I put everything after I sanitize them. I go straight to the bathroom and take a bath before I even say hi to the kids. I then prepare dinner, and we bond later by watching a movie or just talking about how my day went, since I am the only one going out.”

Manaog tries to avoid getting stressed at work by focusing on her job, but makes sure she’s aware of everything that’s going on.

“My colleagues and I are unable to chat during break time. We try to lessen contact with each other for everyone’s safety, even though we have masks on. I usually just talk to my nurse liaison since we are in the same department and we are in charge of the admissions process for the facility,” she said.

When the stay-at-home order was made March 20, the facility was thought to be COVID-19-free. A resident who had to be brought to the hospital in April was tested before being admitted and was found to be COVID-19-positive.

“Because of this, we had to do a mass testing for all residents and employees. A total of 22 residents from our assisted living unit and 13 employees tested positive. We had to transfer all positive patients to a secured unit with only two nurses and two nursing aides allowed.”

Manaog was concerned that the facility would be short on staff, since the 13 employees had to stay home and all their residents were 70 years old and above, which meant there was a high probability of death.

“I felt bad for them since family members were not allowed to visit. We also didn’t have enough PPE (personal protective equipment) at that time, making more nurses sick and infected. It went on like this for almost a month. We had to stop admitting new patients to concentrate on taking care of our residents.”

The pandemic has made Manaog realize certain things about people.

“Even though they are educated about the virus, once they hear that one of us or one of our residents is infected, they tend to walk away. Most of our patients were confused at first but they were not scared. They said they had already lived their lives and were so grateful that we are still here taking care of them.

“As a mother, there was a time I wanted to quit. This was the week we had the outbreak and I was not granted permission to work from home. Deep inside I was so scared of going out, interacting with patients and coworkers, but I needed to be brave for my kids.

“I’d rather be the one working and putting myself out there than having my kids go out and do part-time jobs to help out with the bills. The pandemic helped me teach them how simple life can be and that as long as we have each other, we will be fine.”