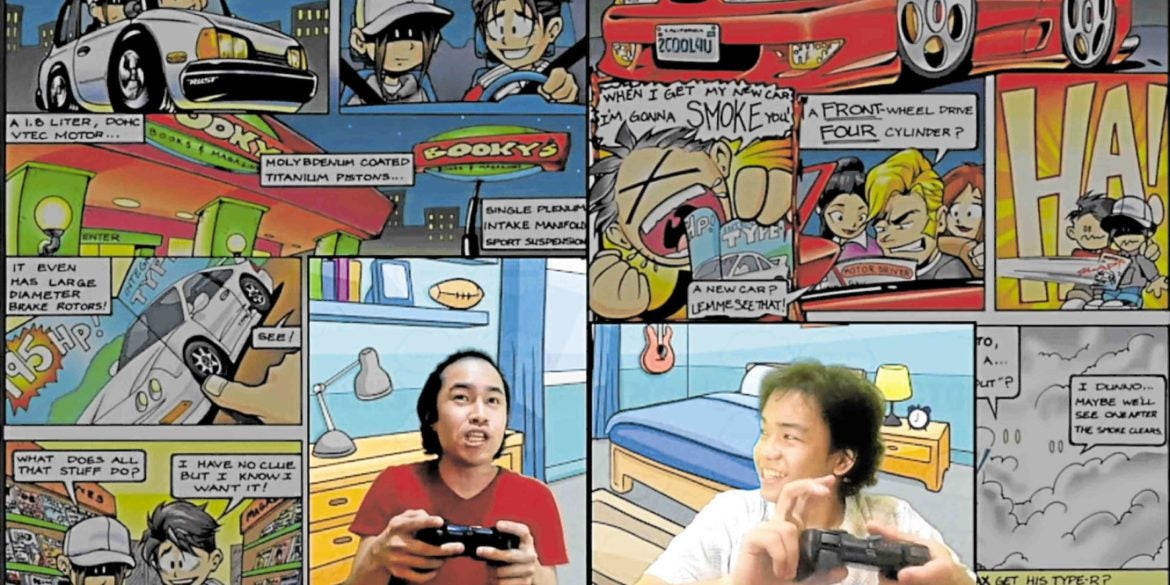 The works aren’t just filmed versions of live performances, but created, designed and intended to be performed for virtual space

The inelegant handling of emotion also marks Juliene Mendoza’s “Multiverse,” one of two plays that know exactly what they want to achieve with their visuals—and execute those visuals with ravishing effect (the other being Daryl Pasion’s “Papaano Turuan ang Babae Humawak ng Baril”).

“Multiverse,” directed by Fitz Bitana, runs away with its visual conceit, merging the superhero comic books of Marvel and DC with arcade video games of old. It also has the perfect actors (Iggi Siasoco and Vino Mabalot) to exude the mile-a-minute energy of its story of two brothers who rekindle bonds after the younger one’s catastrophic spiral into alcoholism.

But the story’s stumble into all-too-convenient melodrama is its undoing—when it starts rubbing the emotions on the viewer’s nose and relies on a disingenuous twist for its climax.

Pasion’s play, on the other hand, looks like an oil painting, with its almost-static background of the light-deprived interiors of a meager home. The writing is also the festival’s most poetic and lyrical—and to a certain extent, succeeds in intimating the personal change that affects the protagonist, a military underling’s lowly wife who must finally confront the senseless violence that has long plagued her husband and her community.

But the play is also overwritten, and combined with Erika Estacio’s loose direction, comes across as a play of big moments and big emotions stifled by the technological platform, and too engrossed with its poetic and lyrical qualities. It also makes you wish to see Lhorvie Nuevo tackle the role of the wife onstage; here she can be affecting, but only to a degree.

Meanwhile, two plays feel more burdened than buoyed by the narrative messages they are so preoccupied with delivering.

Norman Boquiren’s “Mayang Bubot sa Tag-araw,” directed by Mark Mirando, apparently wants to bring to light the desecration of ancestral lands of indigenous peoples in the country, but spends an inordinate amount of time skimming the surface and dwelling on petty and less insightful matters. As the closest this festival has to outright protest theater, the play seems hesitant to dramatize the issues that demand dramatizing (relegating those to its final 10 minutes), or perhaps, too overwhelmed by the issues it initially sought to tackle.

It’s even more baffling with Tyron Casumpang’s “Blackpink,” directed by Jethro Tenorio. It positions itself as progressive, an ally of the LGBTQ community, in creating the characters of a father who has long accepted his son’s homosexuality, and of the son whose family rallies behind him to fight for his right to dance to a Korean girl group’s song in the school talent show.

But as the characters unravel—the “gay” son reveals he is straight, and at one point, the father dictatorially commands his sons to admit to their homosexuality in the name of self-acceptance—the play becomes more confused, and ends up dropping its agenda in favor of a “fun” and “family-friendly” conclusion.

“Blackpink” is not exactly “I have gay friends, so I can’t be homophobic” made manifest, but it sure resembles that friend who claims to be an ally, but nonetheless proceeds to bully (and betray) you, and ultimately tells you to forego and forget politics in the name of “friendship.”

As for Jay Crisostomo IV’s “Dapithapon,” directed by Sig Pecho, and Luisito T. Nario’s “Gin Bilog,” directed by James Harvey Estrada, what’s most striking is how the translation from stage to screen seems to have significantly lost the written work’s essence.

“Dapithapon” is a nostalgia trip for those who miss their adolescence in the presocial media age. Its day-in-the-life story of three boys in the twilight of high school thrives on dick jokes, bathroom humor, and just tons of broad comedy that it doesn’t land all the time.

But onscreen, the energy the play would have derived from portraying three hormonal teenagers in a single space is now fragmented and muted, so much so that the arrival of Ina Azarcon-Bolivar (as the larger-than-life teacher) late in the play becomes such a welcome disruptive force.

The fragmentation and lost-in-translation effect is worse for “Gin Bilog,” an absurd comedy about three drunks whose night gets out of hand and ends morbidly. It would be pretentious to say with certainty how this play could have transpired on a physical stage, but this virtual version unfortunately comes across as rudimentary in so many ways, from the attempts at animation to the strangely catatonic delivery of the comedy.

Instead, the other runaway success of this Labfest is in the Revisited section (traditionally, the three plays from the previous year chosen to return for the current season).

Rick Patriarca’s “Wanted: Male Boarders,” which distilled its central theme—that prejudice is learned, and can be unlearned—into its go-for-broke telling of three hypermasculine guys who must learn to live with their gayer-than-gay new housemate, now comes with a subtitle: “Vidjokol edition.”

Pacing issues notwithstanding, what an utter delight this play directed by George de Jesus III has become. Not only does it make punchlines out of the notion of phone and video sex in the age of smartphones, it has also fully committed to the idea of the smartphone as the stage, and cleverly situates itself in the time of the pandemic—which means TikTok, Snapchat filters, freezing screens, Kim Chiu’s “Bawal Lumabas,” Lady Gaga and Ariana Grande’s “Rain on Me,” and so forth.

The result is a completely new staging that would no doubt merit a spot in the Revisited section.

And among the staged readings we’ve caught, Buch Dacanay’s “Jenny Li,” directed by Nour Hooshmand, is one that demands to be seen.

It’s ridiculous to call this a staged reading (it’s a fully staged virtual production, come on!), and its use of a twist as dramatic device may come across as deceptive and counterproductive in the context of the story it wants to tell.

But this is a play that addresses the unending issue of rape, male predatory behavior, and the exceptional bravery it always takes for victims to come forward—and does so with remarkable empathy and clearheadedness. A spot in the featured works section would have been more than deserved. —CONTRIBUTED