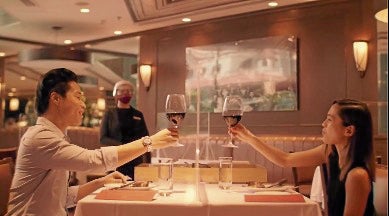 Tables atWolfgang Steakhouse have acrylic barriers for diners to be seated across from each other.

New protocols: When will diners start to come?

The brave ones—because that’s what they are—opened as soon as they were given the go signal to do so. On June 15, restaurants in areas under general community quarantine that had been shuttered for close to three months began accepting dine-in customers at 30-percent capacity.

First, they had to comply with health protocols set by the Department of Trade and Industry (DTI), which included the mandatory wearing of face masks, requiring customers to fill out health declarations, no-contact order taking and maintaining a one-meter distance between tables.

Face-to-face seating is allowed only with proper dividers installed per table.

Because of the work and preparation of reopening, she compared the experience to opening a new restaurant.

“Although the structure, the edifice and everything was still there, we had to create an entirely new setup that would conform to the city government ordinances, Department of Health and Inter-Agency Task Force for the Management of Emerging Diseases regulations,” Sincioco told Lifestyle.

“These things are new to all of us and we have to explicitly study all the facets and effects seriously, set protocols in place which are adaptable to the new system of operation, and make sure that these protocols are strictly adhered to.”

Staff at both branches were required to stay in-house for at least a month to ensure their health.

“At Chef Jessie’s Place where we house our main commissary, I was able to organize a complete production kitchen team that had been quarantined in our new building since day one. They were all housed there and not allowed to go out,” said Sincioco.

The commissary team prepares all food orders for takeout. They were able to set effective production and delivery protocols. “Even our packaging system is very much appreciated by our esteemed clients. So far, things have been running smoothly,” she said.

Still, she admitted that because they can accept only 30 customers at a time, she has had to limit the staff at either restaurant to 10 compared to 50 on a regular day. There are now two teams that will work every other month.

“Everybody on duty will be given their full salary but obviously they will have a big cut in pay. A limited number of guests means a lower amount of service charge, tips and take-home pay. Inasmuch as I would have wanted everybody on board, we are too constrained,” she said.

Like Sincioco, many restaurant owners resorted to offering food for takeout or delivery to tide them over and provide work for staff during lockdown. They had to consider many factors, including how quickly the food gets to the customer to keep its taste, and the type of takeout containers to use that keeps the sauces from seeping out.

Restaurateur Raymund Magdaluyo, president of Red Crab group, and partner at Wolfgang’s Steakhouse (Resorts World Manila, Bonifacio Global City and The Podium), said that at the start of lockdown, people held on to their money, trying to drum up sales in whatever way possible and “prevent significant bleeding.”

He said the “knee-jerk reaction” of many was to push deliveries and takeout. “Everybody was talking about cloud kitchens and moving the restaurant business online, but delivery as the main revenue source is not for everyone,” he said.

Magdaluyo has a valid point. People go out to dine because, aside from being fed, they want to be entertained. Not being able to do that because of the lockdown felt like diners had been denied a theater of experience.

Now that people have that option again, will they welcome it, or has the fear of infection tainted something many of us once loved and looked forward to?

Reluctant to go out

Magdaluyo said that based on his observations, many remain reluctant to head to the malls and restaurants. “More than any other Southeast Asian country, the Philippines has had one of the strictest and longest lockdowns, resulting in a big dip in consumer confidence.”He teamed up with hundreds of Filipino restaurant owners and operators to organize RestoPh, which he describes as “an F&B association helping each other survive and keep as many jobs.”

“A big part of what we have done is help the DTI craft mandatory guidelines for the reopening of dine-in in restaurants last June 15,” Magdaluyo said. “The pandemic is the hardest that has hit this sector since the world wars. The only way to bring back people to malls and restaurants is to remind them constantly of the safety protocols we set in place.”

Sincioco chooses to be cautiously optimistic. “We have to deal with this situation very seriously because people’s lives are at stake all the time. We have to fully know our trade by heart so that we will be able to handle any situation on hand. We have to take very good care of our health; it is truly our best wealth.”

The well-loved Sincioco, who served as Pope Francis’ personal chef on his visit to the Philippines in 2015, has maintained a faithful demeanor the past three months.

“We are not in full control of things around us, and therefore, should always remember that there is an Authority who is mightier and most powerful and in total control of everything,” she said.