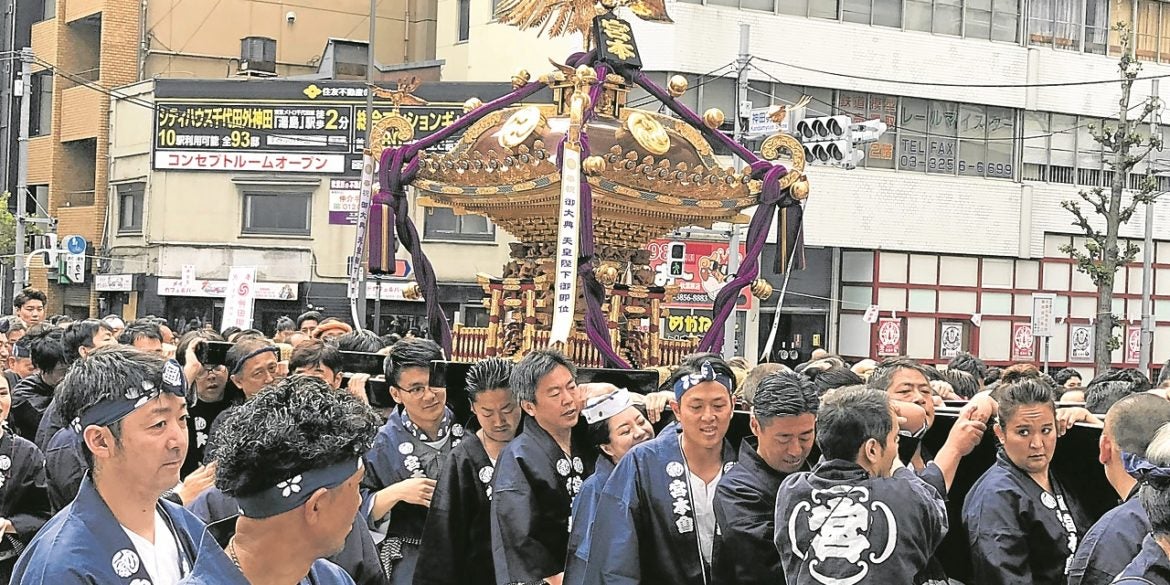 Local residents—men, women and children—parade the “mikoshi” around the different neighborhoods.

The color and energy of Tokyo’s Kanda Matsuri

Biennial grand festival takes place only in odd-numbered years, and has everyone—men, women and children—participating

Just as the Philippines has Sinulog, Dinagyang and other religious festivals, prefectures all over Japan celebrate their own matsuri (or festivals) to offer thanks to the local kami (Shinto deities). Usually lasting several days, the matsuri is festive, energetic and colorful. It’s a great opportunity to soak in Japanese culture and take loads of Instagram-worthy photos and videos.

If you’ve ever been to a Japanese matsuri (or if you’re planning to see one), you would’ve probably heard people shouting “Wasshoi! Wasshoi!” at the top of their lungs and clapping. (In the Kansai area, the people shout “Soiya! Seiya!” instead). The etymology of “wasshoi” is not clear, although some believe it means “Carry peace,” given that “wa” is a word for peace.

As most of the crowd chanted “Wasshoi!,” another group purposefully and rhythmically rocked the intricately designed mikoshi (portable shrine) perched on their shoulders up and down, left and right. Make no mistake: The mikoshi is extremely heavy, which is why a lot of people are needed to carry it. The belief is that by rocking the mikoshi, the kami inside will be entertained and amused.

Kanda Matsuri is a biennial, grand scale matsuri that only takes place in odd-numbered years. So, don’t fret that you weren’t able to fly to Tokyo this 2020. Kanda Matsuri in May 2021 is one Tokyo event you certainly have to include in your must-check-out list.

Many consider Kanda Matsuri one of the three big festivals in Tokyo, or even Japan. The other two are Sanno Matsuri of Hie Shrine in Chiyoda ward, which takes place in mid-June of even numbered years, and Fukagawa Matsuri in Koto ward, which happens in mid-August every year.

Dating back to the Edo Period in 1600, the Kanda Matsuri began when Tokugawa Ieyasu (the first shogun of the Tokugawa clan) won the Battle of Sekigahara. Some stories say that the military leaders prayed at the shrine prior to going to battle. The Kanda Myojin Shrine is dedicated to three kami: Daikokuten, the deity of good harvest and matrimony; Ebisu, the deity of business people and fishermen; and Taira no Masakado, a samurai from the Heian period revered by many people. Until today, it attracts many business people and individuals who are looking for love.

Although the Kanda Matsuri is held over a period of eight days, the main events take place on the weekend. Shinkosai, the main procession, is held on Saturday, and the Mikoshi Miyairi, a parade of close to 200 mikoshi, is held the following day.

The Shinkosai is one of the highlights of the Kanda Matsuri. In the procession that includes close to 500 people dressed in Heian period traditional costumes, huge, ornately designed mikoshi are paraded through the streets to purify the local residents and the neighborhoods. It is a rare opportunity when the kami leave the shrine to be with the people.

The whole procession takes almost the entire day, and the route covers some 30 kilometers and passes through Kanda, Akihabara, Otemachi, Marunouchi and Nihonbashi. Some guidebooks recommend seeing the procession at Mitsukoshi Department Store in Nihonbashi (around 4:30 p.m.). Personally, I think anywhere along the street where Mitsukoshi is offers a great vantage point. The procession leaves Kanda Myojin Shrine in the morning, around 8 a.m., and is back at the shrine by 7 p.m.

The Mikoshi Miyairi, which happens the day after the Shinkosai, is equally exciting and lively. When I arrived at the main street leading to Kanda Myojin, a sea of people had already assembled. Dressed in traditional festival clothes in various colors called “happi coats,” maybe a thousand or so people will parade close to 200 mikoshi around Kanda neighborhoods. Mikoshi from neighboring towns also make their way to Kanda to join the festivities. The parade ends with the return of the mikoshi to Kanda Myojin, where the people receive a blessing. It was great to see children carrying kids’ size mikoshi. It’s one way of ensuring the tradition will be continued by the next generation.

All over Japan, there are plenty of matsuri to attend. Some of the other large-scale matsuri I have been able to attend are Koenji Awa Odori Festival in Tokyo and Tenjin Matsuri in Osaka. One common thing among all the matsuri is the festive and vibrant atmosphere. On my matsuri bucket list are Kyoto’s Gion Matsuri (July), Fukuoka’s Hakata Gion Yamakasa Matsuri (July) and Aomori’s Nebuta Matsuri (early August).

Keep in mind that many of the matsuri take place in summer. Even as a spectator, you have to be physically and mentally prepared. For starters, be ready for the crowds. Depending on the matsuri, thousands of people usually watch. Bring a water bottle to stay hydrated, as summer in Tokyo can be quite unbearable. Just carry a small bag with essentials, including a power bank and a pocket Wi-Fi. Wear super comfy shoes and have an extra shirt or a small towel. Make sure you wear comfy clothes, especially if you plan to follow the parade. Bring your trash back home with you.

Food is also a major part of matsuri. Yatai or food stalls selling various kinds of Japanese dishes like takoyaki, yakisoba and Japanese beer can be seen near the shrine.

Mark your calendars already for Kanda Matsuri in mid-May 2021. You’ll certainly enjoy it, and you might even find yourself in the crowd shouting “Wasshoi!” —CONTRIBUTED