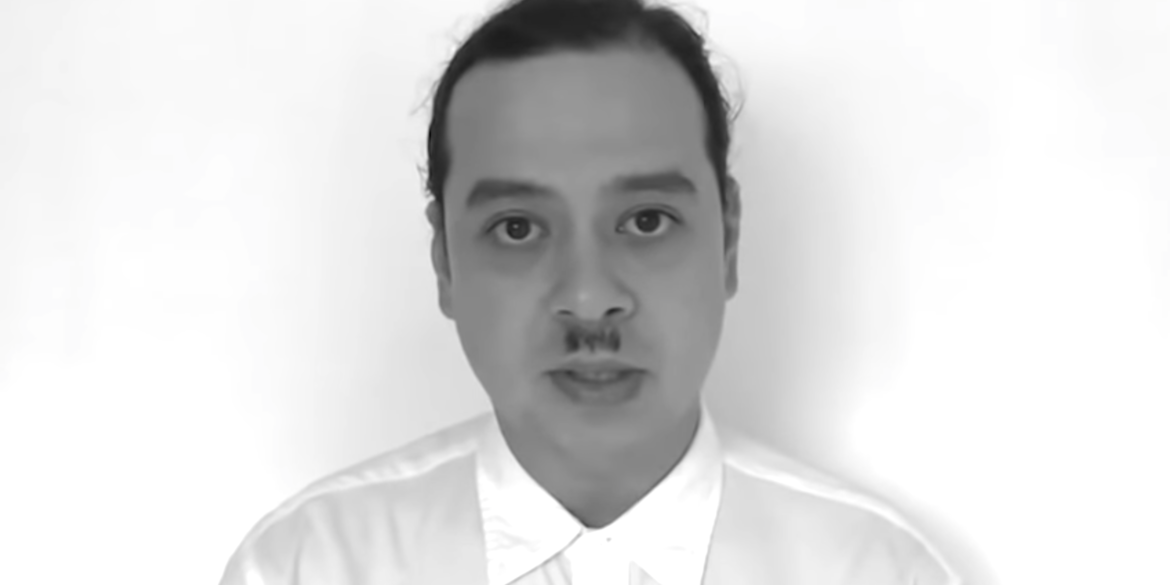 Before we get into John Lloyd’s new look. Let’s get into a bit of background.

At the height of World War II, Charlie Chaplin dared to make fun of the man who represented pure evil, Adolf Hitler. He created The Great Dictator. It’s Chaplin’s switcheroo movie that played on how Hollywood’s funny man shared the same mustache style with Hilter. In the film, Chaplin plays a barber-soldier who is mistaken for Adenoid Hynkel, dictator of the fictional land Tomainia.

In his review of the movie, Roger Egbert said, “In 1940, this would have played as very highly charged, because Chaplin was launching his comic persona against Hitler in an attempt, largely successful, to ridicule him as a clown.”

But Egbert knew that people only rolled with the comedic punches. “Audiences reacted strongly to the film’s humor… But audiences at the time, and ever since, have felt that the film comes to a dead end when the barber, impersonating Hynkel, delivers a monologue of more than three minutes which represents Chaplin’s own views.”

The Final Speech is Chaplin’s earnest plea to turn the narrative around. 1940 would witness Nazi Germany invade more nations and the Battle of Britain. It was the tumultuous year before the attack on Pearl Harbor.

In this scene, it could be surmised that it was no longer Chaplin playing a character. It was him speaking out from the platform he knew best.

A couple of weeks ago, Voyage Studios created their version of this speech with a few celebrities and personalities like Enchong Dee, Gabe Mercado, and Agot Isidro.

Early this week, they released another version. This time it had John Lloyd Cruz start it off. Leave it to JLC to take it further with the ‘stache and hair tied back. Iza Calzado, Janine Gutierrez, Glaiza De Castro, take part in a couple of lines along with political figures such as Sen. Risa Hontiveros, Atty. Chel Diokno, and former Chief Justice Maria Lourdes Sereno.

Lifestyle.INQ got in touch with Chuck Gutierrez of Voyage Studios. He directed and edited the film, which features the Filipino version of Chaplin’s speech, translated by Rody Vera.

How did the project come about?
This Chaplin project is a spur of the moment when Congress passed the Anti-Terror Bill. The provisions in the bill (now law) include the suppression of the freedom of speech and curtailment of liberties, which are just too much to ignore. I called friends who share my sentiments over the matter, and they also felt the need to do something urgently. The respected playwright, Rody Vera, translated The Great Dictator speech in less than an hour after I shared him the idea.

The collaborative spirit from the film community during these very restrictive times made everything possible, and it encouraged people to use their voice and take courage. The film, for one, has always been a powerful tool to inform and inspire in critical times in history. We are living in a time right now where the film needs to be used like that again.

Why did you choose this speech from The Great Dictator? Why was it important to translate it in Filipino?
Charlie Chaplin directed and wrote The Great Dictator in 1940. Hollywood was silent when fascism was rising in Europe led by Adolf Hitler and Benito Mussolini back then. Chaplin bravely stepped out of the world of soundless film and used his medium to voice out the sentiments of the silent majority in America and the rest of the world to remind humanity is the most powerful force against any form of tyranny.

We are living in a different time but are faced with the same scenario of the 1940s. The pandemic has amplified the greed and corruption in the Philippines and the world at large. Chaplin said, “Greed has poisoned men’s souls, has barricaded the world with hate, has goose-stepped us into misery and bloodshed.”

The speech in The Great Dictator proves to be timeless and universal. With this Terror Law coming to full effect anytime now, Charlie Chaplin has to come alive to say once again, “Let us fight to free the world to do away with national barriers, to do away with greed, with hate and intolerance. Let us fight for a world of reason, a world where science and progress will lead to all men’s happiness.”

The Great Dictator speech must be heard again in Filipino by the bravest Filipinos we have today.

How did you get the people in the videos to say yes?
The original intention was getting one actor to deliver the whole speech. Unfortunately, the actor I first asked backed out at the last minute for fear of a possible backlash from the president’s avid supporters. I feel it is also not fair for one man to carry all the stones that will be thrown at him alone.

It served as a blessing in disguise because several other actors from film and theater took courage to participate. The first version went viral, and this made several other personalities to volunteer to create a bigger impact.

Rody and I decided to do another version, but this time with leaders and artists from various fields in collaboration with Mae Paner and the network of Voyage Studios. Besides the personalities who participated in the two versions of the Charlie Chaplin speech, I’m also extremely happy to collaborate with the best sound designers, music scorers, and VFX artists in the country who courageously shared their talents to this project.

What are the other projects of Voyage Studios you’d like to tell us about?
The team is set to premiere HENERAL RIZAL in August 2020 online. The film unveils the confession of General Paciano Rizal to his younger brother Jose about the failed Philippine revolution.

There’s also THE BOY WITH NO SHOES, a short documentary directed by Baby Ruth Villarama, which was initially set to screen last April in cinemas. Due to the lockdown, we are moving the premiere towards the end of the year.

Tell us more about the vision of Voyage Studios
The vision of Voyage Studios is to bring people a little closer through films. In the last decade, the studio has bridged feature films and documentaries that championed Filipino stories locally and in international film festivals, including Cannes, Berlin, Venice, and Busan. The studio hopes to help in the alternative film distribution of local films to achieve a bigger social impact. The team is composed of filmmakers, journalists, and producers with backgrounds in current international affairs, documentary productions, and narrative filmmaking.

Our open network based on industry-standard enables us to do co-production with groups that need assistance in the country. With the pandemic taking a toll at cinemas, we hope we can further help filmmakers share films to a wider audience.