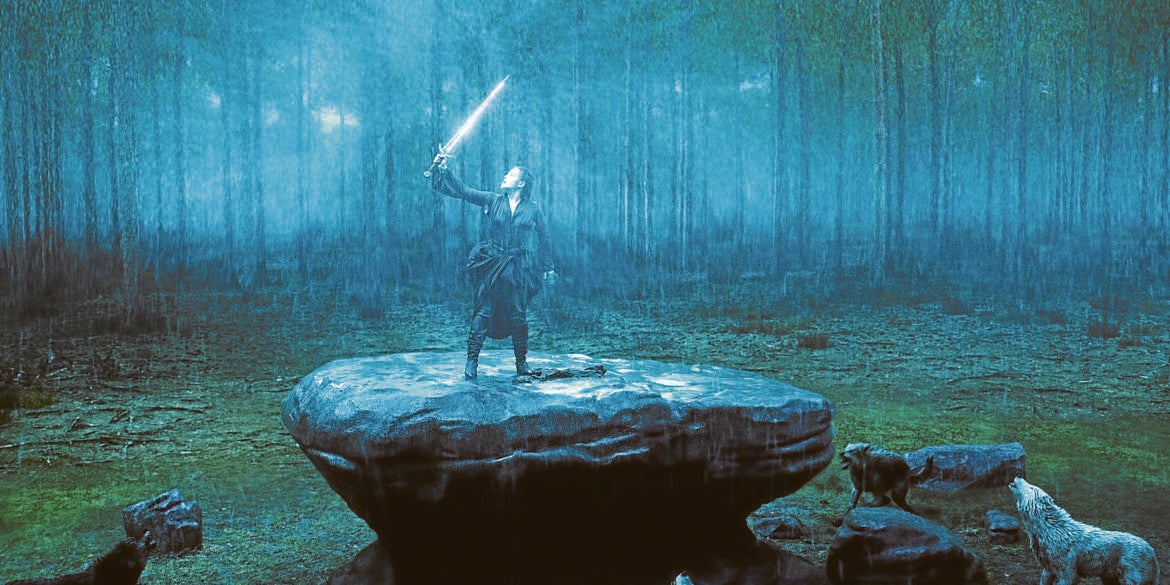 CURSED (L to R) KATHERINE LANGFORD as NIMUE in episode 101 of CURSED Cr. COURTESY OF NETFLIX © 2020

As if drawing a magic sword unexpectedly from a stone, Katherine Langford has found herself the princess of the screen. The 24-year-old from Perth, Australia, had actually been turned away from drama school despite her talent because she was too young but after her powerful turn as Hannah Baker on the controversial Netflix series “13 Reasons Why,” she has become the hottest young actress in Hollywood. She had a quirky part as part of the excellent ensemble cast of Rian Johnson’s whodunit “Knives Out” and as grown-up Morgan Stark, Tony Stark’s daughter in Marvel’s “Avengers: Endgame.” That scene got cut in the theatrical cut but popular demand led to it being restored for the streaming version on Disney+, so Langford knows what it’s like to be reinvented.

This month, Langford takes the lead in Netflix’s reinvention of the legend of King Arthur and Excalibur. The 10-episode series “Cursed,” based on the young adult novel by Tom Wheeler and Frank Miller, features the magic sword in the hands of Langford’s Nimue, the legendary Lady of the Lake. On the show, Nimue is one of the magic-using Fey people, who are being eradicated by the Red Paladins. She has been handed Excalibur by her dying mother with one command: Make sure it is given to the disgraced Merlin (Gustaf Skarsgård). On the run from the dangerous Weeping Monk (Daniel Sharman), Nimue joins forces with the would-be knight Arthur (Devon Terrell) in order to find her destiny in the dark world she has found herself in.

“I think the role came around at a really interesting time,” Langford told Super via Zoom. “I was really looking for something that felt special and different to anything that I’ve done before and I wasn’t necessarily looking to do TV but then this manuscript was sent through to me, and when I read it I just knew that it was something that I wanted to be a part of, you know, growing up, I loved fantasy. I loved action and especially, as a woman, those roles where they’re placing a female at the center of those genres is far and few between so it’s something that I’m really proud to be part of.”

“Cursed” brings the Arthurian legends to a younger, contemporary audience by mixing things up. While the medieval settings are familiar, the characters have been all shuffled, with viewers guessing which characters are which or being shocked by new interpretations of them.

Merlin is one of them. Skarsgård would be familiar to fans of the History scripted show “Vikings,” where the Swedish actor played Floki. “I was always a fan of ‘The Lord of the Rings’ books growing up, and so always had that sort of escapist streak to me,” he said. “There was always something amazing about the magical world of nature and fairy tales. And then it was the character. This Merlin character was written in a way that I’ve never seen before. There are several archetypes at play at once, and I thought that this would be really fun to do. He’s a very destructive self-destructive person when we first find it. He’s lost, what he once was an alcoholic and he’s quite cynical. And then, in the midst of the first season. He finds a new reason to fight, something other than himself.” Coming from the frigid temperatures of shooting “Vikings” in rural Ireland, “Cursed’s” English studio locations were drier and relatively more comfortable. “I also had to work a lot with a language, which is fun, because English is my second language, so it was definitely a chance for me to really conquer the language.”

While talking about the foibles of shooting “Cursed” both Langford and Skarsgård had fond stories about riding horses of all things. “I’ve developed quite a close relationship to my horse Jack,” Skarsgård said. “He was an amazing animal. And we really got along well and he could basically read my mind. “And it was a pleasure to work with Jack not as much pleasure to work with Katherine but, but it was really great.” Langford admits with a laugh that she did gravitate toward Jack and was jealous Skarsgård wound up with the horse.

Everyone agreed that the best riding talent among the actors on the show was Terell. “I don’t like to think of myself as a horseman but it’s true I am the horseman of the group,” he said. The 27-year-old Terell has a thing about playing evolving leaders, playing young Arthur here and a 20-year-old Barrack Obama in the 2016 film “Barry.” “I looked with things, you know though it’s a long life it’s also short in terms of, I’m not going to be able to play 1,000 characters or 100 characters so for me it’s when I play a role I like to give my whole life to it I like to research, everything I possibly can and to me it’s, you know, I always want to find characters that feel like they’re looking for more than just themselves. It’s being in the right point in your life for those moments for those roles and. Yeah, it’s one of those roles where I especially for this role. I had to dig very deep emotionally, to make myself believe that I’m in this world, and could bring this to life. Whereas Barrack it’s like, I know what it’s like to be a young mixed-race kid growing up and just kind of dealing with that so. But yeah, for me it’s just, I would love to play more icons so if Netflix is watching, I’m available.”

The British actor Sharman has been to the Philippines. “I’m a bit of a fan,” he admitted. “I did a bit of a road trip to like Bohol and like a few other of the islands and so I know it well.” Sharman has the most mysterious role on a show full of mysterious roles as a devastating weapon of the Red Paladins who also happens to be an Arthurian legend (but you have to figure out which one).

“I don’t have many scenes so I don’t have many lines,” Sharman said. “And so my job and the challenge that I really wanted to kind of undertake. Was that it’s an internal journey that know that you can’t get there is not spoken, that goes on within him over 10 episodes, and my intention was to kind of play that all the way through, without showing it too much on without talking but but if you go back and watch it again, that hopefully people will see that there are moments where the there was a there turns in all of that stuff. Sharman also got to wear the best eye makeup on the show. “I wanted that to be a story behind them and, you know, eventually you find out what why and what those are and the, the kind of lot of detail I can’t tell you how many times we went into makeup did them redid them kind of changed them I mean, when I first went in and they were like, like crazy you know these crazy things I did look pretty, kind of, I did look a lot like kind of an AC/DC member but we kind of worked it toward the end but no I mean yeah I don’t think I’ve never worn as much guyliner in my life but I did have to admit I did like it because at the end of the day, sometimes they couldn’t get rid of all of it, you know, like, three in the morning I would go home and I’d have some of that on. And I have to admit to you that I quite liked it.”

The source material is unique as well. Wheeler is best known for having been the executive producer of “Empire” and the screenwriter of “Puss in Boots” and “The LEGO Ninjago Movie.” He wanted to deconstruct the Excalibur story for a new audience and was delighted to have comic book industry legend Miller (“300,” “The Dark Knight Returns”) come on board to illustrate it. But they weren’t even finished with the book when something magical happened.

“I’ve been in love with the Arthurian legends ever since early childhood, seeing Disney’s ‘The Sword in the Stone’ and through all the permutations it’s had over all the years,” Miller said. “What drew me to it is really it’s an epic hero’s story and really the central purpose of my career is heroes’ stories. Beyond that is the love the richness of its history. I love the elements of magic running through it. And I’m drawn in particular by the story of Arthur and how he inherited a world of that was barbaric and really brought order and civilization to that part of the world.”

That he was working with a legend did not escape Wheeler. “I’m a lifelong Frank Miller fan and his work had a huge impact on me and my storytelling,” he said. “And so that alone was a great experience just to talk about the world of King Arthur and, and see his vision for these characters was amazing. Then we had the additional opportunity that Netflix presented us with when they kind of reached out to us about midway through the book. They said, you know, how do you see this as a feature or possibly as a series and that made you know, that took an already quite amazing experience and just rocketed it into the stratosphere because we were allowed to take this very kind of intimate, creative process and, and bring it to a team of 200, you know, artists and craftspeople to begin to kind of realize this world in three dimensions.”

The show is a remarkable piece of reimagining and could be a blueprint for bringing classics to a new generation while also inviting those familiar with these mythos. The revelations are effective and Peter Mullan’s Father Carden is as devious as they come.

Truth be told, the rise of “Cursed’s” Nimue echoes the young legend that is Katherine Langford, her newest prominent role indicative of the history she will make, with or without mythical sword in hand. “I mean I still feel very young,” she said. “Like, I am there’s a lot so that I think as a person, but also as an actor. I’ve been very fortunate to have been a part of the projects that I’ve been a part of but I again I still feel like there’s so much to learn, and really one of the greatest things about being fortunate enough to be a part of projects that I love and passionate about is working with incredible people.”