I biked to work: What it’s really like | Lifestyle.INQ ❮ ❯ 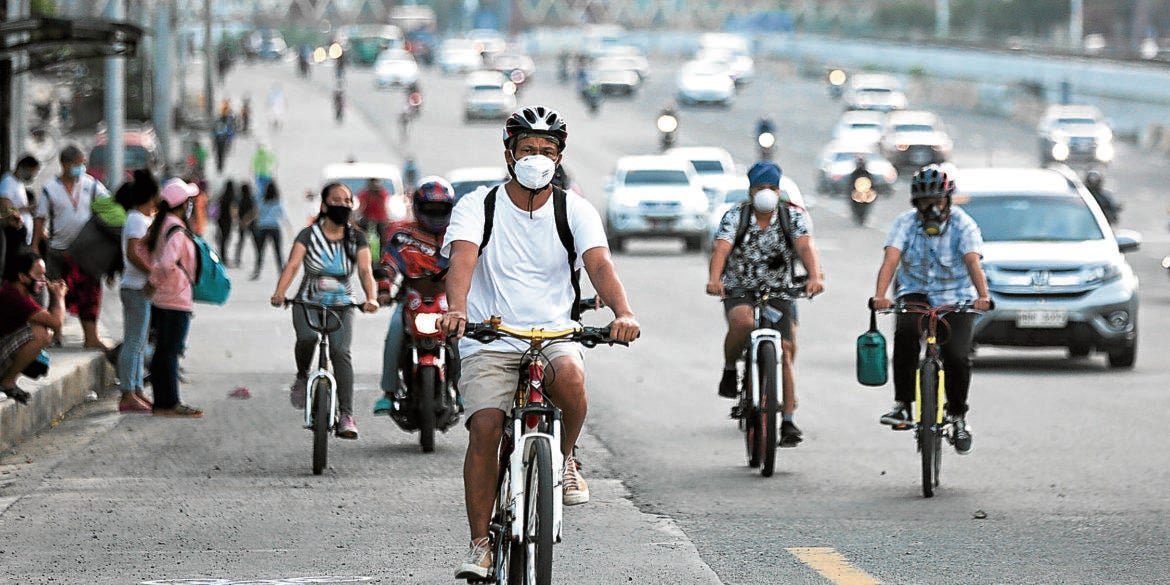 From my home to my place of work is just under 15 kilometers—not exactly a jaunt, but well within reasonable cycling range.

Cruising at a leisurely 10 to 20 km per hour should get me to the office within an hour, give or take. That’s half the time it took to cover the same distance driving a car in prepandemic traffic.

In the process, I’ll also get some much-needed cardio, burn some quarantine body fat and, by being one less car on the road, improve traffic and the air quality in one fell swoop.

It’s a no-brainer, in theory.

With biking to work now being encouraged in the “new normal,” it seemed the ideal time to test the proposition. I hadn’t cycled to work in a few years, not since I discovered how much more fun the commute could be on a 650cc parallel twin motorcycle.

But, as they say, you never forget how. It’s just like riding a, well, you know…

My steed of choice is a steel frame fixed gear bicycle.

With just one gear, no shifting, there’s less to go wrong. The gear I use for commuting is low enough to get me over the mild-hills in Mandaluyong and San Juan that I’ll have to climb to get from my home in Quezon City to the Inquirer offices in Makati.

Once you get used to it, riding a fixed gear makes cycling feel as natural as walking—you speed up, slow down, stop or start with your legs, just like you would if you were on foot.

But you can ride to work in any kind of roadworthy bicycle. Cyclists are the original rainbow coalition. On the way to the office I see people riding mountain bikes, Japanese surplus mamachari or “mom bikes,” small-wheel folding bikes, BMX bikes, fancy expensive-looking road racing machines, bulletproof long-distance tourers and battered “rat” bikes cobbled together from odds and ends.

On the road are the usual Mamil—middle-aged men in Lycra—as well as construction workers riding in their regular clothes with hard hats for helmets. I notice quite a number of women, riding confidently in proper protective gear.

The bicycle is a tool for personal liberation. Used properly, it frees you from the daily indignity of having to rely on a backward, broken-down public transportation system, not to mention the stress and anxiety of traffic.

Being able to go where you want to go, under your own steam, is transformative. Independence is freedom, and the bicycle is one tool for getting you there. (It’s no fluke that bicycling and feminism emerged around the same time at the end of the 19th century—once women got on bicycles, there was no holding them back.)

I roll out of my driveway and into the street. I’m wearing padded cycling shorts under a pair of knickers (my Mamil days are long past), a breathable cycling jersey in high-visibility green, a helmet, glasses and face-mask. Even before the coronavirus, cyclists had been used to wearing masks on the road to keep out nasty particulates and noxious car emissions.

In my messenger bag are the essentials: my work stuff as well as bicycle tools, a tire pump, patches and a spare inner tube. (If you plan to bike to work on a regular basis, you should be able to fix a flat at the very minimum: Pushing your bike to the nearest repair shop is no fun.)

Presently, I arrive at the junction of the private road out of my neighborhood, and the behemoth that is Edsa. I am going south, but since there’s no left turn, I counterflow into the old Metropolitan Manila Development Authority (MMDA) bicycle lane—the one almost nobody uses.

It may come as a surprise, but I’ve never been much for bike lanes.

I’ve never really needed them in the nearly 40 years I’ve been riding a bicycle, and frankly, I hardly ever use the ones that do exist unless I don’t have a choice.

One problem with many bike lanes is that they were obviously designed by people who don’t ride bicycles.

The old MMDA bike lane on Edsa is a case in point: Not only is it on the sidewalk, thereby pitting cyclists against pedestrians, but it’s a virtual obstacle course, with trees, drainage holes, cracked pavement and, did I mention pedestrians? Let it not be said that the MMDA has no sense of humor: They put lane markings indicating two-way traffic on this path that’s barely more than a meter wide—and they wonder why no one uses it?

Well, I use it, to get me to the Ortigas Avenue junction where there is a left turn on Edsa.

Are the new MMDA bike lanes on Edsa any better?

Hard to say. There are only intermittent lines of paint which, I gather, show where the future bike lanes will be. Between Ortigas and Shaw where I will make a right turn, the paint markings disappear and reappear at puzzling, seemingly random intervals.

Since the lockdown, a number of bicycle advocacy groups have emerged calling for separated bike lanes to be built along Edsa and other major roads. But the future of a bicycle lane on Edsa appears far from certain. Its fate seems to be conjoined with that of the bus rapid transit system, which is still being hotly debated. The bus companies—a powerful lobby prepandemic—have made no secret of their wish to return to the old normal, which would render an Edsa bike lane moot and academic.

You’re on your own

I, for one, am not sweating it.

I’m not really keen on being restricted to a bike lane, specially not a poorly designed one. Even the better-designed bike lanes are usually a pain to ride. They’re riddled with obstacles, such as pedestrians, parked cars, vendors. Public vehicles such as jeepneys and tricycles routinely cut in front of you to take on or disgorge passengers, or to turn right with no warning.

In an ideal world, bike paths would be separated from motorized traffic with permanent dividers. They would be as wide as normal lanes, and form part of a comprehensive road system with its own traffic signals and signage. And they would actually lead somewhere.

In an ideal world there would also be secure bike parking facilities, so you could connect with public transport should you want to cover greater distances. Such a system, of course, would involve massive government spending on the infrastructure, and a sustained push from civil society and advocacy groups.

Until then, reality bites. And the reality is, you’re on your own. This is the inverse side of the freedom and independence that bicycling offers—you need to take responsibility for your own safety.

To begin with, learn how to ride safely. It’s a skill that can be acquired, and some bicycle advocacy groups such as the Firefly Brigade offer talks and group rides where they impart these skills.

I turn right on Shaw Boulevard—the road cycling equivalent of the “12 Chambers of Shaolin.” Make it through this obstacle course, and you’ll learn a thing or two about riding safely. There are dozens of intersections along Shaw, and only three or four stop lights. Vehicles are coming out at you nonstop, not to mention pedestrians walking on the road, because the sidewalks are jammed with parked vehicles.

Pre-COVID-19, it was sheer chaos. It’s slightly less so now, without the jeepneys, but for how much longer?

Traversing Shaw teaches you the most essential skill you’ll need to be able to bike to work safely, which is awareness. Hypervigilance is the key. You need to learn to read subtle signs that allow you to predict how cars and pedestrians will behave on the road, and take the appropriate steps to evade them. Developing this “sixth sense” is the key to unlocking the flow of traffic and going with it safely. A bike lane per se is no guarantee.

I navigate the turn to Kalentong market and ride over the Panaderos bridge into the twisting warren of narrow streets in old Sta. Ana. From there it’s just a short hop to Chino Roces Avenue.

I roll into the Inquirer parking lot and check my watch. It took me about 40 minutes. Even by motorcycle standards, it’s pretty good time.

The obligatory temperature check at the gate indicates 37 degrees—not bad for someone who’s been riding under the the sun for the better part of an hour.

Three months of sedentary quarantine have clearly taken their toll. Cycling to work regularly will eventually make you fitter and stronger, but it’s probably best if you proceed from a base fitness level. You don’t want to keel over from heat stroke, or evade the coronavirus only to be struck down by a coronary.

The ride home is uneventful, if a little slower. I usually carry a blinker and headlight, but it’s still light enough not to need them. I take the same route in reverse and get home in under an hour.

I know I’m going to be sore tomorrow, but I wouldn’t mind doing this again.