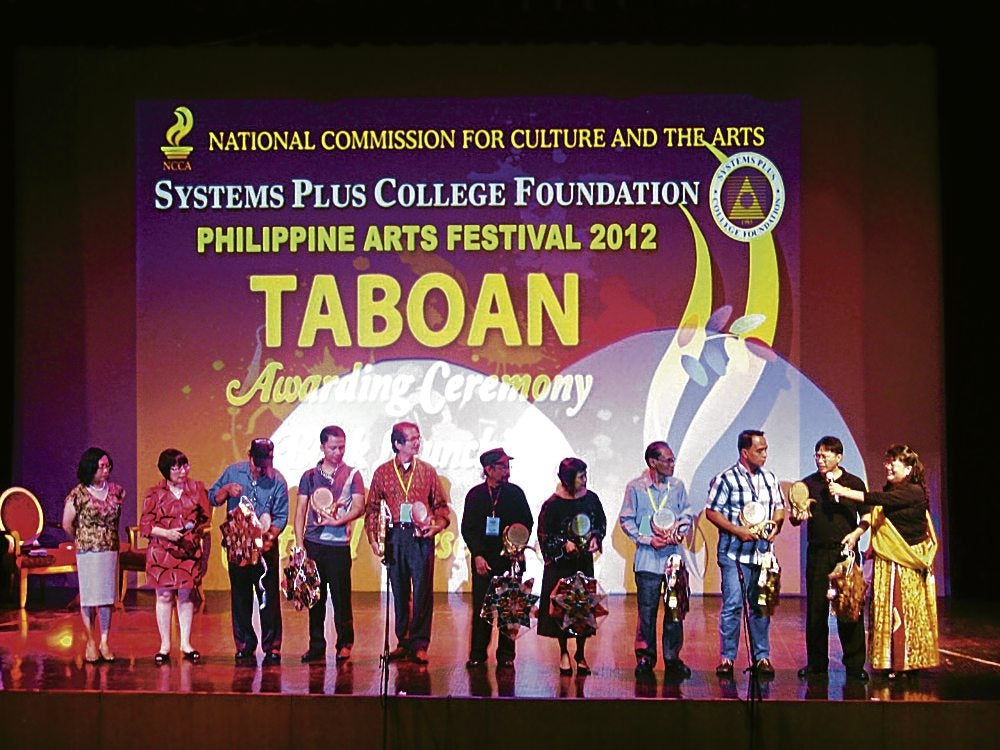 THE TABOAN: PhilippineWriters Festival is capped by a closing ceremony and the bestowing of the Taboan Awards to writers in Luzon for their outstanding contributions led by Priscilla Macansantos, head of the NCCA National Commission on Literary Arts, and Juliet Mallari, festival director. Awarded are Jose Braganza and Juan SP. Hidalgo (Northern Luzon), Lilia Realubit and Benilda Santos (Southern Luzon), Teo Antonio and Rogelio Mangahas (Central Luzon), and Rodolfo Laxamana and Querubin Fernandez (Pampanga)

Literature is the most intellectual of the arts, for which reason it is also the least appealing as far as the public-at-large is concerned.

You can make a social occasion out of a book launch or poetry reading but literature is a solitary art. In the final analysis (or “at the end of the day”) it is best enjoyed in the comfort of your easy chair, a book before you, communicating with a great novelist or poet.

Thus, literature (especially in the Philippines) often needs a shot in the arm to make it more visible.

Screenwriter-turned-novelist Ricky Lee has done that, to an extent, with his well-publicized book launches, thanks to his show-biz friends.

The Cultural Center of the Philippines has its Literature Division, and the Philippine Center for International PEN its regional workshops for teachers of literature.

And then there’s the National Commission on Culture & the Arts (NCCA), with its “Taboan: Philippine Writers Festival,” the most recent of which was held at the Clark Freeport Zone, Pampanga, (Taboan is a Visayan word meaning “marketplace,” in this case, of ideas.)

The three-day gathering brought together writers from many parts of the country, scholars, teachers, students and readers. There were parallel sessions on myriad themes such as the craft of writing, Filipino aesthetics, history, science, the environment.

Almario spoke on Rizal and the Filipino Imagination and made a pitch for Bonifacio, who was also creative (malikhain) and who is at a disadvantage because not much is known about him. Also, Almario indicated, Bonifacio did not have the benefit of a phalanx of eminent translators.

Speaking with his usual candor, Jose said the organizers had “no imagination” because they did not choose such topics as justice, corruption, patriotism and literature, and how artists can better society. The topics for discussion were “divisive.”

“We are shallow, mababaw ang kaligayahan,” he declared. “We are a weak and corrupted nation. This is a challenge all writers must face.”

Also true to form, Lumbera adopted a sober, scholarly approach to the topic “dutifully” assigned to him—Central Luzon literature. He cited the history of rebellion in the region, from the Sakdlistas to the Huks, the tenancy system, and the early activist poetry of Benigno Ramos and Rio Alma.

During the parallel sessions, in the welter of opinions, discussions, experiences recounted, recollections, questions and answers, and points raised, some stood out:

Writers must fight for their rights.

If you can motivate your students to read, you are halfway there.

A writer will always have his options, if you can write you can do anything.

The short story is still important. It is an historical record. New stories (north of Manila) are being written on    urban-rural tension.

Writing is more fun in the Philippines.

Which brings us back to our original concerns. Is literature (in the Philippines and the rest of the world) alive and well?

Well, not that well frankly (pardon the pun). But it is still around (think of great writers like Gabriel Garcia Marquez, Salman Rushdie, John Irving, et. al). And it will always be around as long as there are book lovers who go for the novel, short story, play, and the critical or personal essay.