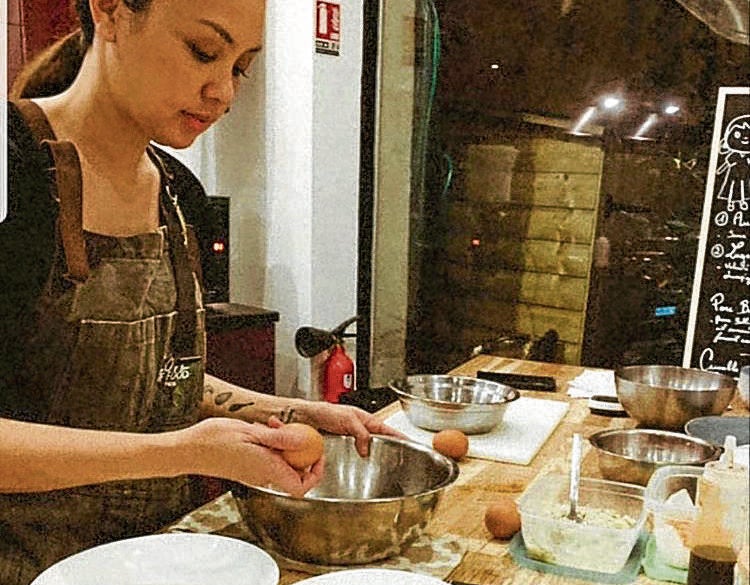 Erica Paredes in the kitchen

The pandemic has left many people turning to cooking for solace and therapy. The more enterprising have made it into a profitable hobby.

Three Filipinos residing halfway across the world have used it as chance to promote Filipino cuisine.

Friends Paulito Rondolo and Mike Morales, who live in Amsterdam, have jobs that don’t require them to wear aprons. Rondolo, 39, is a freelance senior SEO consultant, Morales, 41, is a photographer.

Before the new coronavirus disease hit, they were planning to host a small event under their brand Kalye (@kalye.nl on Instagram). They wanted to sell exclusive sneakers and serve guests the food they grew up eating. They thought it was a great way to introduce the Dutch to Filipino cuisine.

In this pandemic, however, they could do only the latter.

“We planned to start with what, in our opinion, are the most likeable and commercial dishes from our cuisine, based on flavors, textures, colors (Instagrammable!), price, scalability and comparability to other popular cuisines,” said Rondolo in our online interview.

“We decided to start off with a bowl of adobo or barbecue (chicken and vegan), combined with pancit bihon, chop suey, white rice topped with crunchy garlic-panko breadcrumbs to give it a sinangag feel, and green papaya atchara.”

The meal is packed in an ecofriendly container and includes a banana leaf to be used as cover to heat up the food or as plate customers can eat on with their bare hands. The pack comes with a list of instructions on how to enjoy the meal, and access to a weekly curated Spotify playlist they call “Kalye Dreams.”

They also offer snacks such as vegetarian lumpiang shanghai with homemade banana ketchup or spiced vinegar, and chicken lollipop with a sweet, sour and spicy pineapple sauce.

“It’s going slowly, but steady,” Rondolo says. “The reception so far has been extremely positive. People keep complimenting us on the flavors, price and presentation. We use mainly social media for now, but we will start using Takeaway.com next week and take our concept to the next level. Our market is mostly locals.” The duo’s goal is to open multiple spots in the city, and hopefully, sell some of their products like marinades and sauces in the supermarket.

Erica Paredes, 41, has also been selling Filipino food-to-go in Paris, which she began in May. It has kept her very busy.

“It has been great,” she says. “I haven’t slept for eight weeks so I take that as a successful run. I started with clients I have had for years, and now I have a lot of expats, locals and Pinoys who miss home.”

She moved to France in 2016 to go to cooking school, and after working in several restaurants, decided to be a private chef instead.

This year started out promising for Paredes, who has done pop-ups and culinary incubators where chefs get to test their concepts by renting resto space. But when the lockdown was imposed, she went into panic mode.

“I had no idea how long it would last or what it would mean for my industry. Even the most popular restaurants were suffering, and the Michelin-star restos resorted to takeaways to get by.”

To avoid logistical problems, Paredes waited until the lockdown was lifted before offering dishes to go.

“Every week, I try to come up with choices that are comforting, easy to transport, and easy to put together and make big batches of,” she says. “There is always at least one Filipino-inspired dish.”

Other items she has cooked include tapa and tocino, thrice-cooked pork adobo with couscous and pomegranate, champorado with coconut-black treacle granola and vegan coconut milk, and kare-kare with brown rice.

This gig is just a temporary solution for Paredes. She’s hoping that things begin to ease up in Paris so her scheduled pop-ups and restaurant takeover can push through.