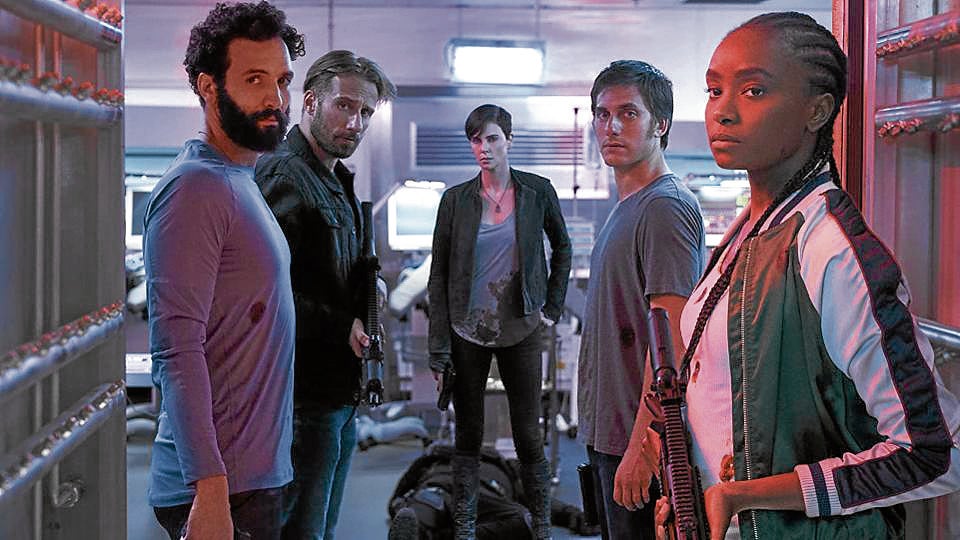 Charlize Theron (center) and the cast of “The Old Guard”

‘The Old Guard’: Visceral but not meaningful

Based on the comic book of the same name, “The Old Guard” is an action movie that follows a group of mercenaries being hunted by a corporation looking to profit off their secret to immortality.

This 2020 release is somewhat a cross between the supernatural action movies of the early 2000s and the popular comic book flicks of the 2010s. It occupies the same world of dark and edgy camp as that of the “Underworld” and “Resident Evil” franchises, while directly paying homage to X2 and Hugh Jackman’s immortal killer Wolverine.

But it doesn’t incorporate the black leather look. Instead it goes for the more practical, paramilitary attire of the Marvel Cinematic Universe.

In between these sequences are surprisingly tender moments, with the characters reflecting on mortality. There’s nothing too deep or insightful going on, but it’s on this emotional level that the characters are most fleshed out. Charlize Theron, Matthias Schoenaerts and Chiwetel Ejiofor are effective at getting the audience invested in these characters’ eternal struggles.

These performances and the movie’s central conceit could have come together in a meaningful ending, but ultimately falls short. “The Old Guard” attempts to link these main characters’ struggle with immortality to the unending cycle of violence, war and suffering they’re a part of. But it sidesteps an insightful conclusion to that train of thought in favor of the opportunity to tell more stories with the characters.

The mythology angle could’ve produced truly layered characters. But it didn’t explore how being a part of political, religious and world conflicts throughout history helped shape the characters’ personal philosophies or belief systems.

Theron’s Andy mentions she’s an atheist, while Joe (Marwan Kenzari) and Nicky (Luca Marinelli) reveal they fought on opposing sides during the Crusades, but that’s just about it.

Throughout the movie, the characters mention multiple key historical conflicts and vaguely say they “fought for what was right,” which does nothing to flesh out the character or what they think is “right.”

All soldiers fight for what they think is right. In effect, “The Old Guard” ends up delivering a group of blank canvas soldiers, to whom the audience can attach their own beliefs.

As entertaining as it is, “The Old Guard” isn’t going to be a comic book movie that lives on for its deep dive into history. But it does work as a visceral action flick to pass the time. —CONTRIBUTED