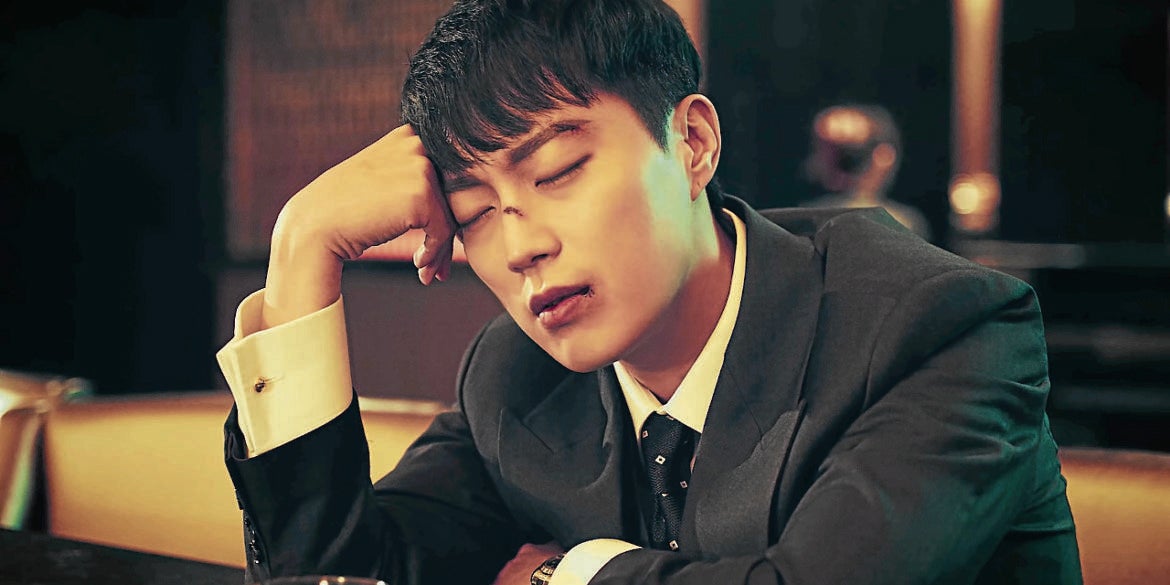 Yoon Doojoon drowns out his mysterious sorrowin the music video of “Lonely Night.”

Discharged from compulsory Korean military service only last April, singer-actor Yoon Doo-joon, the leader of the legendary K-pop group Beast, now Highlight, has finally debuted as a solo artist with the release on July 27 of the mini-album, “Daybreak.”

Beast/Highlight has been around for more than a decade now, and while every one of the original six members has had solo stints, Doo-joon has held off going on his own despite being the very popular leader that he’s been—well, until now. It could be said that, drawing from the timely title of the album, he has finally found the light. (Incidentally, Hightlight fans are called “Lights.”)Doo-joon is popular not only as a K-pop singer-dancer but also as a K-drama actor. Since debuting as Beast in 2009, the Korean entertainment media has called him “national boyfriend” since survey after survey has shown he’s the pick of many women as ideal man. Notable among these is “Miss Korea” Lee Hyori, herself a former K-pop idol female group member who turned soloist and built for herself an image of a bombshell but also a talented singer-composer-activist. “He has the appearance of the type of guy I like,” she said about Doo-joon. “I like guys with big eyes and no double eyelids.”

Doo-joon is not the usual K-pop or J-pop pretty “flower boy”; he’s blessed with manly looks and build. He is very athletic and best known for his awesome football skills. In fact, he had wanted to join professional football until an injury dashed that dream so he turned to K-pop. Because of his football excellence, he was named K-pop ambassador of the Korean football association.

Rare among K-pop idols who have tried acting, Doo-joon quickly graduated to leading man roles. In 2018, women viewers of KBS’ “Radio Romance” swore that whenever his famous but tormented actor character would cast a penetrating stare at Kim So-hyun’s lowly scriptwriter character, their hearts would beat faster, going “Du-jun, Du-jun.”

But he’s best known for playing the charming food blogger Goo Dae-young on tvN’s culinary-based hit comedy “Let’s Eat.” The program became some sort of an instructional on how to prepare and eat Korean cuisine and was reported to have generated a rush of food delivery orders while on broadcast; without a doubt, it has introduced Korean cuisine to a worldwide audience.

Unique for Korean TV, the well-loved series has had not only one, not two, but three seasons! In fact when he was suddenly summoned to military service in 2018, after an amendment which lowered the absolute age to render national service from 30 to 29, Doo-joon was still doing “Let’s Eat 3” and the series had to be cut short.

Because Goo Dae-young has become a Korean everyman, Doo-joon has been stereotyped as the hearty eater, wolfing down Korean servings with relish and satisfaction. Other people would look awkward and even repugnant when they’re photographed devouring food, but not Doo-joon, who seems to have made an acting specialty out of chowing down anything edible, cooked or uncooked. It helps that he’s photogenic and is really a hearty eater. (His football seems to have taken care of the extra calories.) It also helps that Goo Dae-young is almost always dressed in a suit, as Doo-joon in person is dapper and very sophisticated.

Because of TV acting commissions, Doo-joon has not had a solo album despite persistent demands from fans. He has finally given in to the demand while the rest of the Highlight members remain in military service.

But even in his solo album, Doo-joon seems to be channeling his TV roles. The carrier single, “Lonely Night,” is a moody R&B song (by BXN, Byun Moo-hyuk and Keebomb) with the lyrics expressing—what else but loneliness.

In the very sleek music video, Doo-joon in a black suit strikes a dapper but downcast figure as he enters a bar to drown his heartsick. Bruises mar his handsome face, indicating he’s been in a fight perhaps involving the woman of his life. (How his women fans would have wished they were the cause of his misery!)

His loneliness may owe of course to reasons other than heartbreak. Why has the national boyfriend refused to date and always zealously guarded his privacy? And since Highlight members are well known for their close bond, does Doo-joon miss Yong Jun-hyung (the rapper-composer has resigned from the group), main vocalist Yang Yo-seob, main dancer Lee Gi-kwang and maknae Son Dong-woon? But most probably “Daybreak” and “Lonely Night” are merely sticking to the Beast/Highlight signature. The group’s most memorable songs are almost always about heartache and the anguish of separation: “Rainy Day,” “Fiction,” “Shadow,” “Good Luck,” “12:30,” “Ribbon,” “It Is Still Beautiful,” “Sleep Tight,” “Calling You,” “Loved” and “Take Care.”

In fact, the lyrics of “Lonely Night” talk about sleepless nights, much like Highlight’s “Sleep Tight,” and of the sad passing of the hours, much like “12:30.” If ever, fans wanting to see the national boyfriend date and finally have a girlfriend should take heart (or is it warning?) from the plaintive lyrics so eloquently enunciated by Doo-joon’s very manly but affecting vocals:

But I have to keep lying

And it’s not easy anymore…

In the lonely night

In the lonely night