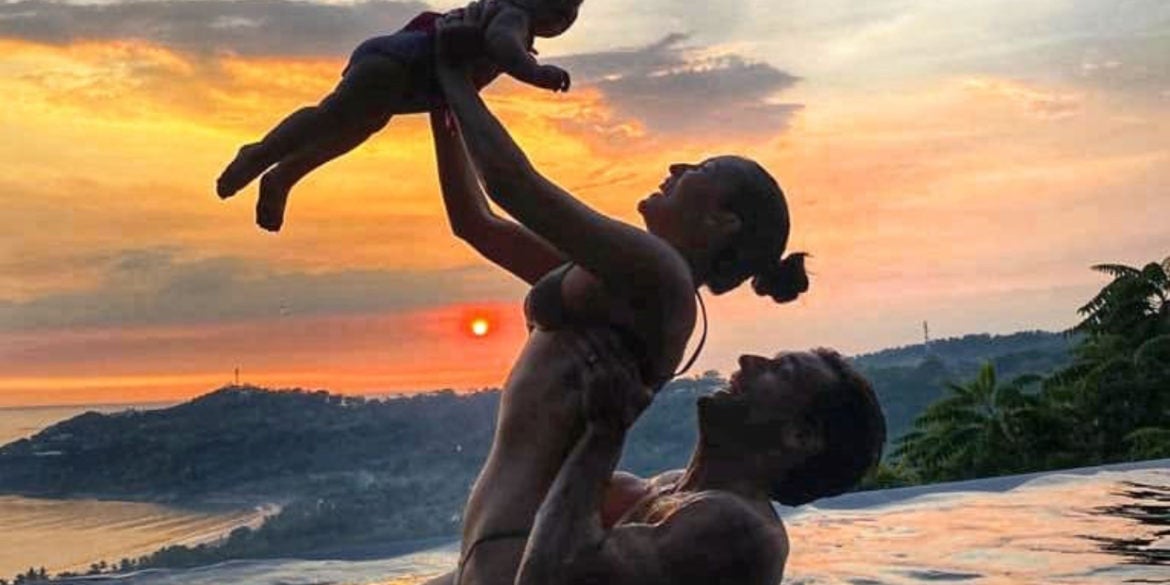 ‘Although I am now 4 kg heavier and my hips are 4 inches wider, I am way happier now’

If someone like Solenn Heussaff could be at the receiving end of body shaming, who here is safe?

The actress-model-artist, an outspoken advocate of body positivity, this past week posted a vlog that addressed people’s tendency to body shame others, especially pregnant women or new mothers.

“I’ve had a lot of people tell me, ‘Ay, maganda ka naman kahit buntis.’ Or, ‘Blooming ka kahit nanganak na.’ Is that supposed to mean that people who give birth don’t look good? Or, people who have just given birth aren’t supposed to be glowing? I don’t think so.”

The vlog is Heussaff’s frank and candid account of her postpartum weight loss journey. “Getting back isn’t simple. It will take time, especially if you’ve never worked out before, it will feel like it’s impossible,” she says. Every woman has a different journey, she adds, and that they should take their doctor’s advice.

“I thought I’d be back to my old weight in three months. Wrong!” says Heussaff. “I lost weight only on the fourth month, and felt more like my old self only on the sixth month.”

Heussaff, who’s married to Argentinean businessman and social media star Nico Bolzico, gave birth to daughter Thylane Katana (nickname Tili) via cesarean section, which prevented her from going back to an exercise routine right away.

To allow her surgical wound to heal, her doctor advised her to resume a walking workout only on the eighth week postpartum, jogging after three months and to most workouts only on the fourth month.

Heussaff, following her own routine, advises new moms to: 1. Walk at least 20 minutes or 3-5 kilometers a day, or on uphill incline on the treadmill; 2. Do yoga and breathing exercises to strengthen the core; 3. Wear a binder to protect their wound; 4. Nourish one’s body correctly; and 5. Measure themselves to monitor the inch loss.

She said the last step is important so as not to get obsessed with checking the scale. Postpartum, she saw that she was losing inches but was stuck at 65 kilograms for three months and “it got me kinda depressed,” she says.

In the vlog, she demonstrates some exercises, as well as recipes for healthy juices she has been drinking. Breastfeeding, she adds, is no excuse to overeat.

In the woke era and age of political correctness, it’s almost preposterous to hear that people still think it’s OK to talk about other people’s weight like it’s their business.

“Women who go through pregnancy go through a lot, yes,” Heussaff says, pointing to her eye bags. “You don’t sleep, your body changes, your boobs sag, your nipples change, some to the size of the coaster for your beer. My boobs are uneven. My left is super lawlaw and my right is nice and perky… It is difficult as it is to look at the mirror and you don’t recognize yourself. We do not need the extra thought bubble of other people, thank you very much.”

Three years ago, Heussaff also tackled body shaming in her blog. “Since when did ‘Tumaba ka’ become society’s new ‘Hello?’” she wrote at the time. “I have heard this one too many times—said to my face and said to others—and honestly, I am sick of it. There’s the straightforward ‘Ang taba mo”; the pasimpleng ‘Parang tumaba ka?’; the super insulting ‘Buntis ka ba?’ when you’re NOT pregnant; the pa-funny (but just as mean) ‘Diet diet pag may time.’

“After years of feeling annoyed, frustrated and trying every diet available in the market to conform to people’s opinions of me, I said to myself, ‘F–k this. Why am I so hurt and affected by what others think?’ Especially when the people who tell me I’m fat don’t know anything about what I’m going through and don’t even know the first thing about health.”

Two years ago, she was also quick to her sister-in-law’s defense when netizens speculated, wrongly, that Anne Curtis was pregnant, based on a photo Heussaff posted. “Even if you are saying cute things, it’s really a bad habit to always comment about people’s weight,” Heussaff wrote.

“Ever since I got pregnant and the lockdown, I am way happier now,” she says in her recent post. “I care less about judgmental people. And although I am now 4 kg heavier than I was and my hips are 4 inches wider, I am way happier now. I hope a lot of moms out there will also embrace the way they look now… You guys are powerful in your own way.”

As a parting shot, she sasses up on camera and predicts what haters will say: “‘Vlog ba ito o view ng boobs ni Solenn?’ Eh naka-sports bra ako! Let me be proud of my sagging, uneven boobs!”