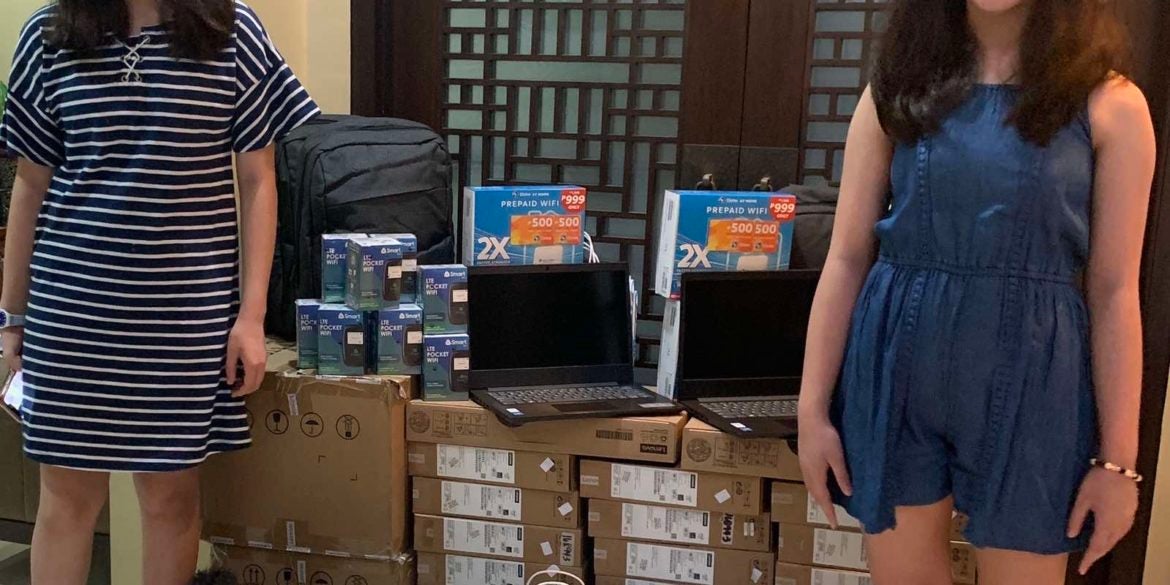 Mia and Andrea Barrera with their dogs Sunshine and Luna, and the laptops and pocket Wi-Fis for 26 lucky public school teachers.

Look at the positive effect of the lockdown on two sisters who realized they couldn’t do without having their own laptops for their online classes.

It was easy enough for their parents, Robrina and Ricardo Barrera, to get an extra one but it was then with all the talk of blended learning in public schools that they wondered, do all teachers have laptops and how easy would it be for them to buy one?

It was also about that time when their mom, a banker, read a MovEd Instagram post that 26 teachers from Bicol and Metro Manila needed laptops and pocket Wi-Fi for this school year. The idea of a modest fundraising project to help was born.

Mia, 13, joined her mom at a meeting with MovEd to discuss more details and the target date was Sept. 14 for the laptops.

As Mia recalled, the teachers said they did not need a camera on their computers nor were they particular about any brand.

Mia and her younger sister, Andrea, 9, decided on how they could help. They had done modest fundraisers before, selling hand sanitizers long before frequent hand washing became mandatory.

They explained what Project L.A.P.T.O.P. (Loving And Providing Teachers Our Presents) was all about, and began soliciting from their family members, grandmothers and friends.

To their surprise, people were only too willing to help—they even overshot their goal.

The 26 laptops cost P390,000 but “we collected P426,200,” says Mia. “We used the extra money to buy pocket Wi-Fis for the teachers. This was such a memorable and inspiring experience! I was beyond blissful…”

“It gave me a feeling of satisfaction to be able to share my blessings,” Andrea said.

Mia and Andrea, both students at British School Manila, thoughtfully said that it seemed many people were raising money for the front-liners. “But not too many supported the teachers who also needed help.” Nelson Mandela’s words have inspired them, “Education is the most powerful weapon and it can change the world.” —CONTRIBUTED