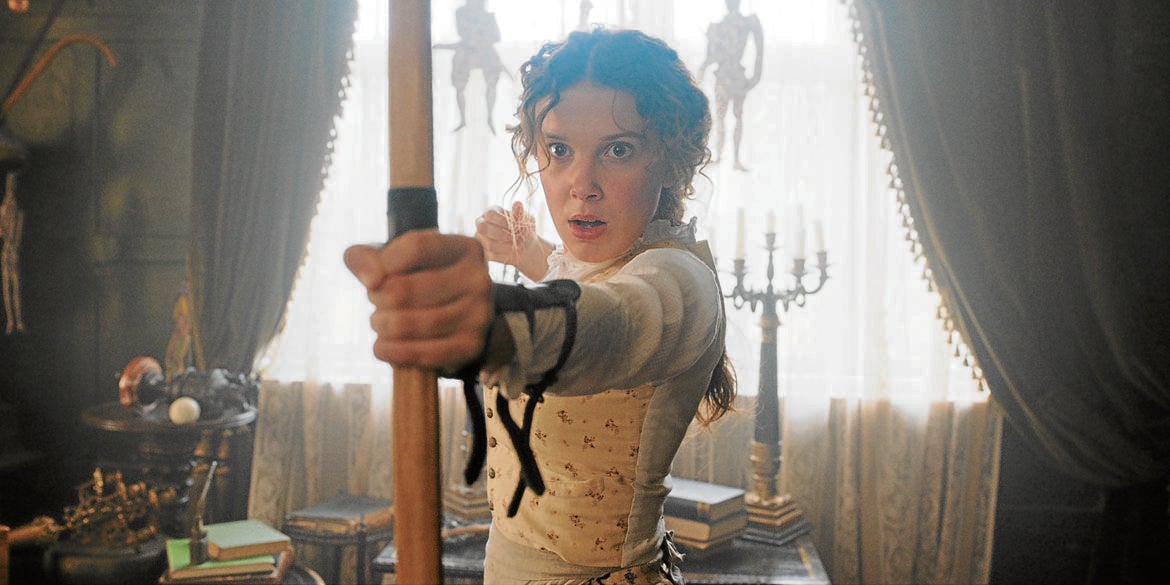 Millie Bobby Brown (“Stranger Things,” duh) has been looking for a British character to play and she, with the help of her sister Paige, found it in a book by author Nancy Springer: Enola Holmes, Sherlock Holmes’ spirited younger sister.

PCMA (Millie’s family’s production company) and Legendary Pictures have adapted the first book in the six-mystery series “The Case of the Missing Marquess: An Enola Holmes Mystery” by Nancy Springer into a fantastic (and refreshingly feminist) film which also stars Henry Cavill as Sherlock, Sam Claflin as Mycroft and Helena Bonham Carter as Enola’s mother Eudoria. The film is directed by Harry Bradbeer (“Fleabag,” “Killing Eve”).

“Enola Holmes” begins streaming on Netflix Sept. 23. It’s exciting, it’s fun, and as early as now, people have been predicting that this will become the next big franchise. We think so, too.

We had fun Zoom chats with Millie, Harry and newcomer Louis Partridge who plays Lord Tewksbury. Here are excerpts. (And to read the full interviews, visit our website inquirersuper.com.ph.)

How has your thinking on women’s rights and empowerment evolved over the years?

Before getting into the acting and film industry I was never just educated enough to know much about women’s rights because you don’t really get taught that in school, which is kind of crazy. But getting into the film industry and working on “Stranger Things,” I started becoming more exposed to other projects and I definitely found myself in situations where I felt like I wasn’t getting equal opportunity as other people. I wanted to do what everyone else was doing and I hated that what was holding me back was I wasn’t old enough, or I didn’t have enough experience, or I was just simply a girl. Filming this film gave me the empowerment, to be able to talk about sexism, especially in this industry.

You’re also a producer in the film for the very first time. How was that experience for you?

It was incredibly rewarding to be able to star in this film and also be part of the production. I believe that we should have more young female filmmakers out there on sets. I love the production side of filming so I was all up for it.

Enola celebrated her coming of age in the film and you also turned 16 this year. How did you draw from your own personal experience trying to portray a young character who is finding her place in society?

This is a coming-of-age story about a young girl finding her purpose in life. And as you all know, to be a young girl in an industry, it can be difficult to find your place. Because I’m also very busy, it’s very hard to take that time to show myself self-love and self-care. So when filming this, I definitely learned that, you know, it’s OK to do that and find your purpose. So it’s actually my coming-of-age story as well Enola’s. So we were both really going on a journey together.

The stunts were more fun than anything. I was the one pressuring everyone saying, “Let me do it, let me do it” and they were like “No, no, no, no, no” and I was like, “Please let me do it. I want to fly kick the air.” And they were like, “But you need to film tomorrow.” I’m like, “I don’t care. Hi-ya!” The stunts for me were just very, very fun. I was actually never tired while doing stunts, it was more the emotional scenes and the dialogue that would drain me. You know, Enola never stopped talking, similar to me, and I was always very tired at the end of the day, but the stunts were easy, that was the easy part.

The reviews have been positive. Did you have any concerns before your film came out?

I don’t get nervous about things like that. You got to think of it like this: Once you make something, you’ve made it. There’s no going back. There’s no changing it. As much as I watch myself and say I wish I didn’t do that or I wish I didn’t blink at that moment, you’re gonna sit there and do that all day long. I am genuinely so proud of this film. What I know is that we made something, a real collaborative effort, Harry Bradbeer and Ali Mendes, and pretty much every single cast member that put 10 out of 10 effort in this film. For me this is my masterpiece. If you love it, I’m so happy and if you don’t, I’m sorry, but this is genuinely, one of the most exciting parts of my life. At the end of the day I know I’m proud of it. My parents are proud of it. And my little sister Ava doesn’t stop saying, “Let’s watch Enola again, let’s watch Enola again.” I’m like, “Ava, no I can’t listen to my voice anymore. Stop it now. We go to bed.” And she’s like, “Can we just watch it?” That’s pretty good. I don’t need to be concerned. She likes it which I think means it’s good.

What was the audition process like and how did you react when you finally found out that you got the role?

The audition took place over like a four-week period in the run-up to these big exams that I had. I was so so nervous. I found out [I got the role] on the day of this exam and I couldn’t concentrate. I ended up doing really badly. But it didn’t really matter to me because I was about to spend the summer filming this incredible project.

What do you want young people to enjoy the most about this film?

A sense of empowerment, definitely. They don’t have to fit in. You can be an Enola or you can be a Tewksbury who isn’t your typical man, who loves his flowers and his tree houses. Also that every vote matters, especially in America, right now. There’s just so much to take from this film if you want to, if you choose to. I’ve seen it so many times and every time I find something different.

Your chemistry with Millie was fantastic—what was the secret behind it?

I think spend as much time as possible with the other character, with Millie, outside of filming. I hadn’t seen “Stranger Things,” which helped me, because I didn’t go, (gasp) “It’s Eleven. It’s you.” I wasn’t completely nervous with her which made it easier. She’s really, really down to earth. It was really easy to build a relationship and it all came naturally.

How have you not seen “Stranger Things?”

(laughs) I really need to watch “Stranger Things.” I do. It’s quite bad. I told her the other day and she was not happy. But I quite like it. It’s quite funny.

Why did you want to do this project?

I loved its freshness. I love to subvert genres, I like to take any genre really and find the heart in it and turn it on its head. I thought finding the heart in the adventure film, finding the politics in it was exciting. But the thing that I most loved about it was Enola, I felt that she was a fresh character to bring to the world. She took us on a journey with her by talking to us directly. It was like she was grabbing the audience by the scruff of the neck and saying, “Come with me.”

She’s energetic, spontaneous and remarkably instinctive, which I love in actors. Thing I most recall about her is her bravery. She had such bravery whether she was having her head stuck in a bucket or doing fight sequences, over and over again. Also in her emotional bravery. She was prepared to take the character to moments of despair. She wasn’t afraid to show vulnerability, which I thought was very mature and central to the character.

You’ve been taking projects that have gone on to become important pieces of art for the feminist movement. Do you think this story also falls in that tradition?

You know what I thought? I’m making this film for little Fleabags. Women came to me after watching “Fleabag” and said “I feel acknowledged, I feel confirmed in who I am.” Those are some of the most moving experiences I’ve had, when people have come to me and said, “Thank you for ‘Fleabag.’ I’ve begun to accept myself.” It brings tears to my eyes. I think there are girls out there who are going to feel self-accepting through this film.

People are already predicting that this is gonna become the next big franchise. Are you ready to direct the sequels?

I love to. I’d love to. If that happens that would be amazing.

What message do you want the general public out of it especially during this time?

There’s a line in it which is “every vote counts.” Need I say more? 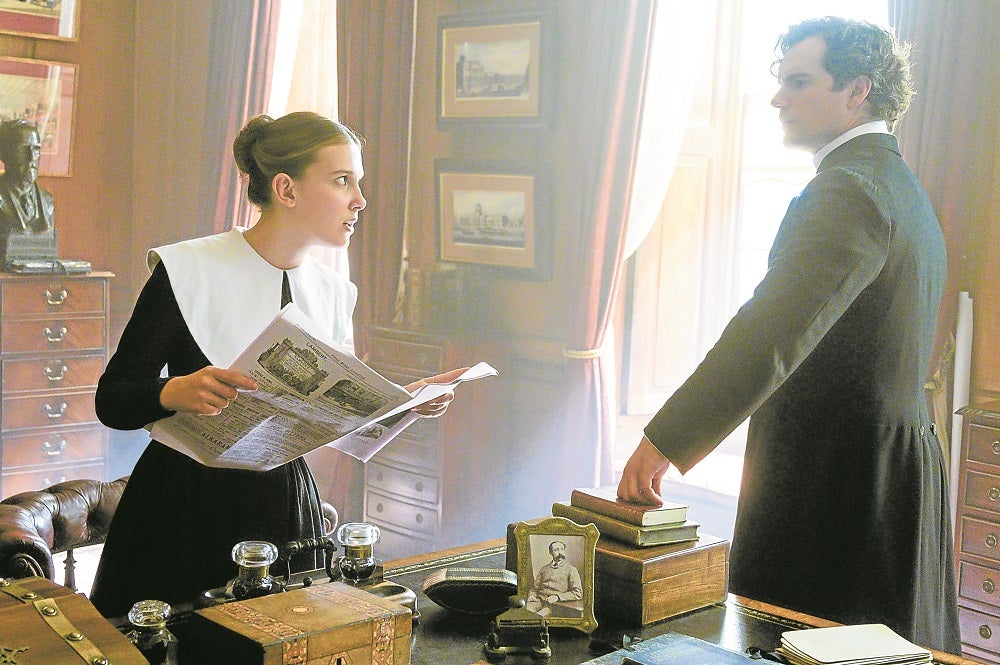