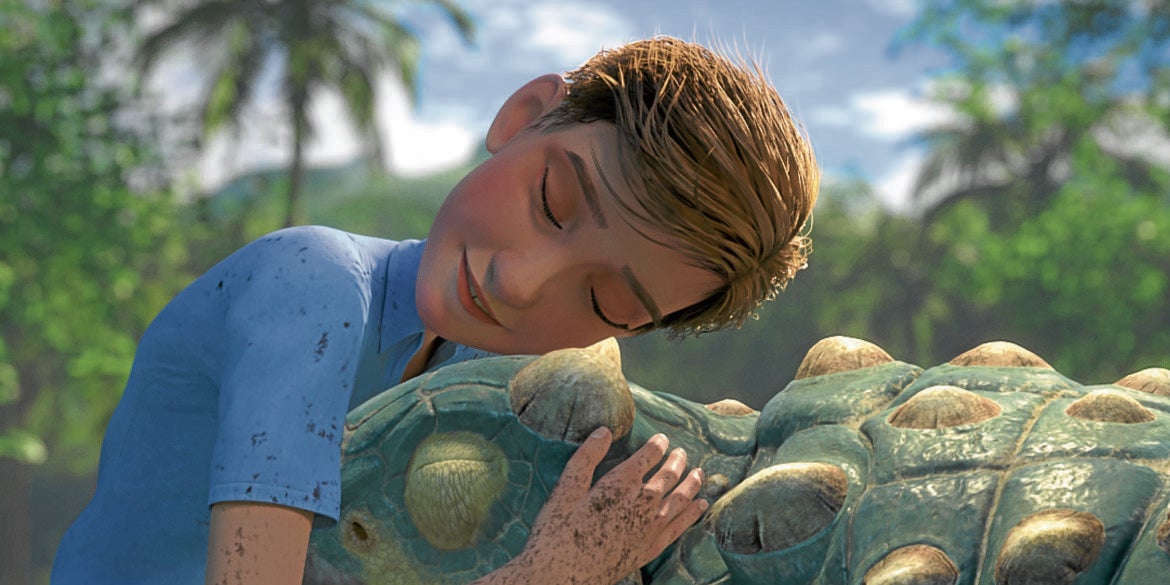 As a kid, Colin Trevorrow used to play with dinosaurs. “I was a dinosaur kid but mostly in the context of how those dinosaurs can help my other action figures fight various battles and get around. I would kind of mesh dinosaurs together with my Star Wars figures and various others. They’re very helpful in war, even though I don’t necessarily support that storyline in the movies we’re making. But when I was a kid, yeah, dinosaur-laden battles were a big deal.”

Those hours of playing turned out to be prophetic. Because as writer, producer and director, Colin gets to play with dinosaurs (and Star Wars characters, in “Star Wars: Episode IX—The Rise of Skywalker”) on a much bigger scale.

But that’s not why we were on Zoom with him earlier this week. We were there to talk to him about “Jurassic World: Camp Cretaceous,” a computer-generated animated series from DreamWorks Animation and Netflix that started streaming on Sept. 18.

The show is set against the timeline of “Jurassic World” and follows the adventure of six teenage campers (Paul-Mikél Williams as Darius, Jenna Ortega as Brooklynn, Ryan Potter as Kenji, Raini Rodriguez as Sammy, Sean Giambrone as Ben, Kausar Mohammed as Yaz, Jameela Jamil as Roxie, Glen Powell as Dave) who end up trapped in Camp Cretaceous on the opposite side of Isla Nubar.

Colin, who shares executive producer credit with Steven Spielberg among others, told us about the joys and challenges of bringing “Camp Cretaceous” to life.

Can you talk about the decision to create an animated “Jurassic” series?

We recognize that we only make one of these movies every three years, and we put a lot of time and heart and care to them and yet, if you’re a kid you’re 6 years old and you love Jurassic World, three years is half your life. It’s a long time. And so we wanted to be able to make something that kids could go to and get that fix and have the experience with dinosaurs that they love so much at home, you know, without having to wait for us.

What do you think makes the “Jurassic” franchise continue to thrive for almost three decades now?

One is that every day, so many new dinosaur fans are born. We have the advantage that dinosaurs were real, they were here and kids are introduced to them. What’s very exciting is we get to play in a world that’s based, you know on our own scientific reality, and I love how much it gets kids to recognize the value of the natural world and how briefly we’ve been here compared to how long the earth has existed.

What’s it like having the responsibility of taking care of this franchise?

I feel very fortunate that I’ve even been able to play in the sandbox at all. And now that I’ve been doing it for many years, it’s just really something that’s become a part of my life in a really huge part of not just my career but of my life, with my family. So much of it has been defined by this responsibility to make sure that this is legacy lives on and is respected. I see myself as a bit more of a gardener, I’m a custodian of this and I’m very sincere in how grateful I am for all of it.

How much of a hand in terms of the creative execution or storyline does Steven Spielberg have in the show?

He puts a lot of faith in me and it’s something I really appreciate in guiding all this forward. But I do go to him in key moments, crucial moments and ask for his advice. On a macro level, he’s giving these writers permission and a lot of ways to be as openly creative as possible. The one thing that he said very clearly to everyone is he didn’t just want this to be a kids’ show. He wanted this to be “Jurassic” which means that the kids are in real danger. And that’s something that we’ve done in all of the films pretty consistently, you know not only is nobody safe and you know dinosaurs don’t discriminate in human life when it comes to who deserves it or who doesn’t. They’re animals and that comes to children as well. It gave the writers a great freedom to create a show that has a level of tension in it because you’re not really sure who’s safe and who isn’t.

How’s the filming of “Dominion” doing especially during this time of pandemic?

You know, it’s a time of great solidarity amongst the people who are making this film, and yes, there are really pretty strict protocols that we’ve put in place. I’ll be the first to admit, maybe we’ve gone beyond what is absolutely necessary. But that’s a choice that we made, because we just want everyone to be as safe as possible and we want to be able to finish this film. It’s the livelihoods of so many when it comes to our crew and people who are working for us and I’m just astounded and really moved by how everyone’s risen to the occasion on this movie and we all show up. We wear masks every single day and we are tested three times a week and we take temperature checks every morning when we show up. I’ve been quarantined away from my family for four months. I’ve seen them for two days out of those four months, and all of these things we’ve done because we care so much about it. And I really believe it’s going to show in the movie that we’re making.

I like the ankylosaurus a lot, you know, hard shell and soft middle. And I like the microceratus which is one you guys haven’t seen yet but it’s coming up. It’s kind of a little one that you could have as a pet.