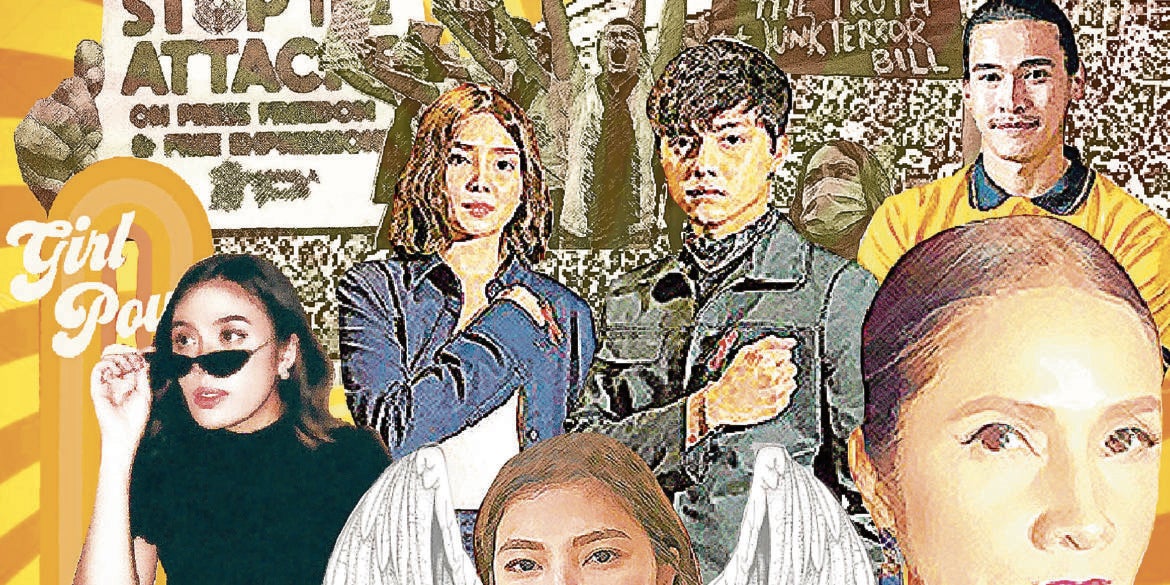 Celebrities make juicy targets for the troll army because of their large social media following. —PHOTO ILLUSTRATION BY STEPH BRAVO

Age of the ‘woke’ celebrity: Battle vs trolls

When online fans rush to their idols’ defense, the messages are amplified even more in a vicious, parasitic cycle

This is the age of the “woke” celebrity.

From analog-era outliers like former APO frontman Jim Paredes and actress Agot Isidro, whose celebrity one might say is a “preexisting condition,” to Twitterverse queen Frankie Pangilinan, whose fame emanates largely from her social media clout, celebrities are using their platforms to speak out on all manner of social and political ills, from homophobia and fat-shaming to extrajudicial killings and government corruption and ineptitude.

Celebrity activists are nothing new.

Time was, when you didn’t like what the government was doing, you picked up a placard and hit the streets, or headed for the hills. Beauty queens Nelia Sancho and Maita Gomez both joined the underground rebellion after martial law was declared in 1972, became political prisoners, and continued their resistance long after they were freed.

The “rebel queen” tradition goes back even further, to movie star Carmen Rosales, who joined the anti-Japanese guerrilla resistance and Salud Algabre (soon to be portrayed by Nora Aunor), another beauty queen who joined a peasant uprising in the 1930s.

Life was a lot simpler then.

Today, the media sphere is the battlefield for hearts and minds, and to speak out is to become a troll magnet.

We’re not just talking about random jerks with nothing better to do than snipe at famous people for not being perfect human beings.

In the increasingly polarized and toxic environment that is the Philippines under the Duterte administration, being trolled often means facing down a well-oiled, well-funded machine consisting of organized online groups, blogger-propagandists and troll farms specifically created to defend the government and swat down any and all opposition voices.

Celebrities make especially juicy targets for the troll army because of their large social media following: If and when they clap back on a troll attack, the celebrity unwittingly allows their messages to piggyback on his/her feed. When the celebrity’s online fans rush to their idols’ defense, the messages are amplified/echoed even more in a vicious, parasitic cycle, sending social media counters into overdrive.

“Targeted abuse of public figures is not just about ‘lulz,’” the think tank Center for Countering Digital Hate (CCDH) said in a 2020 report titled “Don’t Feed the Trolls: How to Deal with Hate on Social Media.”

“It is a deliberate tactic designed to generate outrage and attract more viewers to misinformation and hate. Political trolls are skilled and determined propagandists, promulgating harmful extremist beliefs, like sectarianism, racism and religious intolerance, using abuse and mockery.

“Troll propagandists know that when public figures engage with abusive trolls to defend their reputation or their values—a normal behavioral response—this inadvertently spreads and legitimates the trolls’ message and tricks social media algorithms into pushing it into a broader array of users’ timelines.

“This helps trolls spread their message to far more people than they could alone, as they usually congregate in small, densely interconnected, highly active clusters with little access to the broader public. Social media has given trolls a cost-free means to spread their message to far larger numbers of people. This has exposed more people to hateful attitudes and conspiracism, and risks the trolls winning new converts.”

Of course, the law of unintended consequences also comes into play, and troll attacks can have the opposite effect.

Nowhere is this more apparent than in the government-orchestrated campaign to shut down the ABS-CBN broadcasting network, seen as critical of the Duterte regime.

Apart from being the country’s largest television network, ABS-CBN also happened to have the largest roster of celebrities in its talent pool, including some of local show business’ biggest stars—most of whom rushed to their keyboards to defend the network.

The result: previously apolitical (and sometimes even pro-Duterte) stars and their fans got woke. Almost overnight, stars started speaking out not only about the ABS-CBN shutdown and the threat to press freedom, but other issues such as public health and the government’s lackluster pandemic response.

“Taking from their old but trusty playbook, [DDS trolls] made “#YesToABSCBNShutdown” trend (the same hashtag promoted by fake accounts taken down by Twitter a month ago), while more influential propagandist-bloggers attacked and responded to critics,” wrote Don Kevin Hapal in a June 16 article on Rappler titled “Propaganda machine meets its match: Celebrity fandoms.”

“The information operations then were as potent as ever, but not enough to contain an online crisis of its scale. The machine found itself face-to-face with bigger enemies: not only were they up against massive public outcry, but also against TV personalities with larger clout and swarms of agile, loyal and organized online fan groups,” Hapal wrote.

“In attempts similar to old propaganda machine tactics, fans of ABS-CBN celebrities, who have largely stayed out of politics before, campaigned to not only support their idols’ TV network but fend off trolls by reporting them en masse.”

For instance, fans of the Kathryn Bernardo-Daniel Padilla “love team”—and they are legion—reacted to Bernardo being trolled by DDS propagandist Banat By by launching a massive reporting campaign on Twitter and Facebook to block the blogger’s accounts with the hashtags #WeBlockAsOne and #StarveTheTrolls, which almost immediately topped the trending charts.

“What makes online fan groups effective in steering online conversations is similar to what makes propaganda and disinformation networks effective: volume and connectedness,” concluded Hapal in his article.

“Shared interests provide for strong connections within fan groups and between a fan group to another. Dedicated fans are able to find a community of like-minded individuals within social media platforms, and these communities essentially become echo chambers that further heighten their members’ loyalty to the fandom’s cause.”

Could Newton’s law—that every action has an equal and opposite reaction—also apply in the nonphysical social media sphere?

Too soon to tell, but the CCDH has a simple recommendation: Don’t feed the trolls.