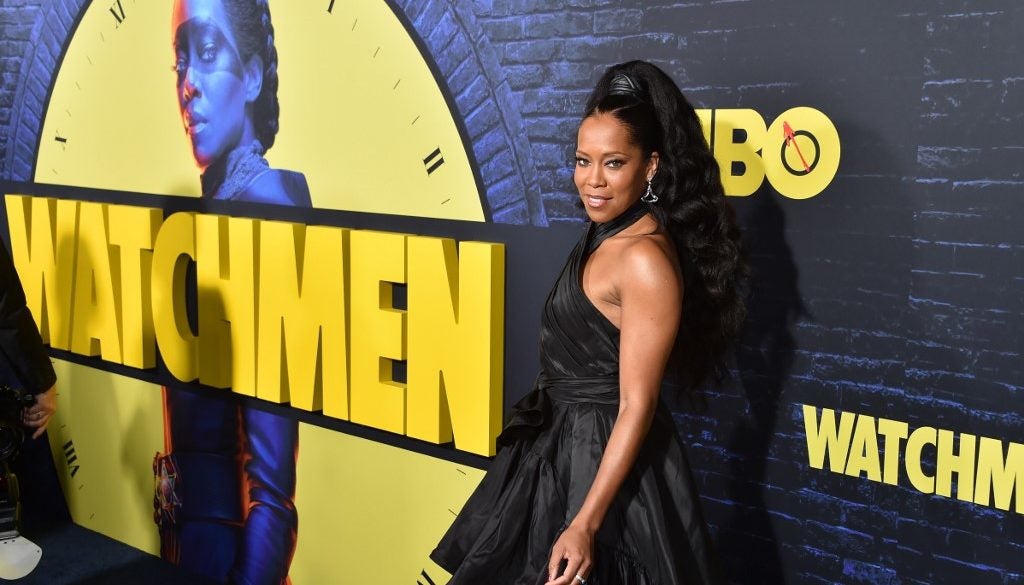 (FILES) In this file photo taken on October 14, 2019 US actress Regina King arrives for the Los Angeles premiere of the new HBO series "Watchmen" at the Cinerama Dome in Hollywood . - US actress Regina King won Outstanding Lead Actress In A Limited Series Or Movie with Watchmen during the 72nd Primetime Emmy Awards ceremony held virtually on September 20, 2020. Hollywood's first major Covid-era award show will look radically different to previous editions, with no red carpet and a host broadcasting from an empty theater in Los Angeles, which remains under strict lockdown. (Photo by Chris Delmas / AFP)

The creators of big Emmy winner “Watchmen,” a timely blend of superheroes and political satire that confronts US racism, say they are proud to have spotlighted the nation’s historic traumas and modern-day injustices — as fans hope for a possible follow-up.

The HBO hit series, based on a seminal 1980s graphic novel, scooped up 11 Emmys at this year’s television equivalent of the Oscars, making it Sunday’s top honoree.

The show opens with the 1921 Tulsa race massacre, in which up to 300 people were killed when white mobs torched a black neighborhood, but which many Americans have never heard of.

The convulsion of violence nearly a century ago received renewed attention this summer when President Donald Trump held a controversial rally just down the road.

“When the show premiered back in October, that night the word ‘Watchmen’ was not trending on Twitter, but ‘Black Wall Street’ and ‘Tulsa massacre’ were,” creator Damon Lindelof told journalists after his Emmy wins.

“And it just showed you that people actually have a real hunger to find these missing pieces of history. You just have to find ways that are a little bit off the beaten path to tell them.”

The show is set in an alternate timeline created by Alan Moore and Dave Gibbons in their “Watchmen” comics.

In this universe, superheroes are real, but many have turned out to be sociopathic far-right outlaws.

Featuring on Time magazine’s list of the 100 best modern English-language novels, the original book is widely hailed for bringing mainstream popularity and artistic credibility to the graphic novel form.

Race plays a central role throughout, not just in the pilot episode’s portrayal of the deadly destruction of “Black Wall Street” in Oklahoma.

In the show’s present-day scenes, reparations paid to the families of Tulsa massacre victims have galvanized a white supremacist group, who are furious at the government’s support for minorities and bent on triggering a race war.

For best actress winner Regina King, who wore a tee-shirt bearing the image of Breonna Taylor — an African-American woman killed in a police shooting in her own home — those struggles resonate with the reality of being black in 21st century America.

“She represents just decades, hundreds of years of… violence against black bodies,” she said.

The show’s Emmys wins came in the increasingly prestigious limited series category, which is intended for standalone mini-series.

But a sequel of sorts has not been categorically ruled out.

Lindelof said Sunday that he “invited any other artist who wants to take the baton — I’ll teach them everything that I know.”

The showrunner added that he personally found it “so much more special” to end after nine episodes, and that he was “so much more excited about seeing what someone else does with it.”

Noting that “someone else created” the original “Watchmen,” he added: “It would feel like a huge betrayal of winning limited series to come back and say, well, it was only limited series dot dot dot…”

Asked about her own possible involvement in a follow-up, King said there “have been no conversations” — but that she would want to jump in if Lindelof returned.

“We’re coming to a close of this chapter of the ‘Watchmen’ series, as it is now,” she said.

“And it is bittersweet, it’s emotional, and I’m just trying to remain in the moment.”