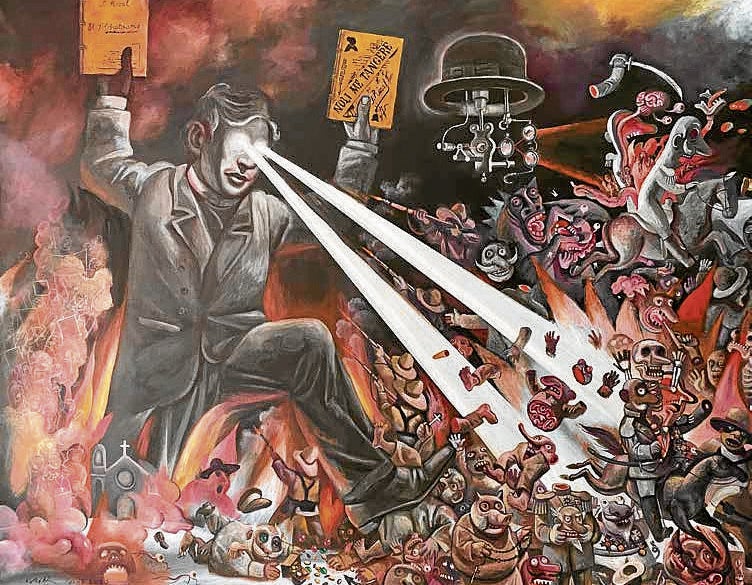 ‘Cherished Implications’ is the first revolution at Eskinita Art Farm

A few scant months after we kicked Marcos out of the country, I found myself working for the first time in a real newspaper.

Fired by the holy zeal of our newly restored freedom of expression, we took up residence above a sewing machine shop in a Port Area building vacated by one of the old crony press. The previous tenants had left piles of moldering newsprint behind, inhabited by wharf rats as big as pugs who refused to be evicted from the premises.

There was no shortage of trenchant social critics and political analysts in our Opinion and Commentary sections.

The real deep thinkers, however, were in the Art Department, which occupied its own autonomous region apart from the main newsroom.

Open the door to the artists’ den around deadline time on any given day, and you would be met with a cloud of cigarette smoke and the music of the Mahavishnu Orchestra, Traffic or The Smiths blasting from the communal cassette stereo system.

You could cut the creativity in the air with a knife along with the semipermanent haze. It seemed to palpably ooze from the half-dozen or so artists hunched over their drawing boards, intent on creating daily mini-masterpieces of savage Hogarthian satire or social surrealism, trading wisecracks and repartee all the while. By closing time another half-dozen or so more artists would have arrived. Some of them didn’t even work there, drawing paychecks at some other rival news outfit.

They were all inexorably drawn into the orbit of the department’s El Jefe, the idiosyncratic dark star Nonoy Marcelo, who seemed to orchestrate the tenor and pace of the day telepathically even as he tossed off the day’s editorial cartoon or his “Ikabod” comic strip, fueled by cans of Coke and Philip Morris Menthol 100s.

At the end of the working day, everyone piled into Marcelo’s Ford Laser and headed for D’ Beer Plaza, this wild bunch’s chosen watering hole on Welcome Rotonda, to continue the party into the wee hours. (In those days before nonsmoking newsrooms and in-office Zumba classes, that was how “real newspapermen” were supposed to live.)

Such heedless and unbridled creativity, exercised day in and day out without regard for the state of one’s liver, was of course unsustainable and the whole thing burned itself out in a couple of years or so.

Thirty-plus years on, however, reverberations from that all-too-brief nuclear event still manifest in the work of its survivors.

A case in point is “Cherished Implications,” the joint exhibit by DengCoy Miel and Jose Tence Ruiz, which inaugurates the Eskinita Art Farm in Tanauan, Batangas, on Sept. 27.

The two artists made their acquaintance during those wild years, deepened the friendship when both served stints at the Singapore Straits Times—a rewarding period of enforced normalcy that probably preserved their health and sanity—and have proved simpatico exhibition partners since. (The dynamic duo previously tag-teamed in 2018’s widely heralded “Engage-Disengage” joint exhibit.)

One can easily trace the evolution of each artist’s work back to their newspaper days: such a horrific tour de force as Tence Ruiz’s “mga ninong ni neneng dos,” for instance, appears to these eyes a more fully fleshed-out outgrowth of the painstakingly detailed pen-and-ink editorial illustrations he used to create for our daily edification back in the day. Miel, for his part, pays explicit homage to this period and its departed magus in “lungga franca: boses ni ikabod dagang sosyal realist.”A quote from Patrick Flores’ appreciation of the work of the late critic Alice Guillermo sets the tone for the exhibit:

“Her sensitivity to humanistic philosophy, materialist critique, and the history of art strongly places her at an angle of vision to enable her to discern the nodes of context and the elucidations of emergence. Forms, therefore, are rooted and yet released, relativized and yet distinguished, cherished and yet implicated.”

Flores might as well be describing Miel and Tence Ruiz’s works, which clarify, expand and articulate fragmentary ideas and images long incubated in their so-called ephemeral work, captured on paper even as the events that triggered them were still unfolding. Taken collectively, they chronicle the long series of betrayals by those in power that have led us to where we are today.

Tence Ruiz, in fact, spells it out in his own inimitable prose in the exhibit’s remarkable catalog essay, “Parsing the present sludge,” which deserves to be quoted at length:

“These latest three quarters of AD 2020 were a discombobulating epilogue to a three-decade long re-animation of fascism, diplomatic palsy and comprehensive global pandemia that some of us, then still in our bright-eyed 30s, thought we’d said a firm goodbye to. We dreamt this then as the ’90s signaled the end of the millennium. One hoped that, Tiananmen Square notwithstanding, the crumbling of the Berlin Wall, the unshackling of Apartheid, the fragmentation of Stalin’s Soviet project, the consolidation of Asean, the launch of the World Wide Web, the uniting of Europe would somehow, wistfully, pull us closer to Utopia rather than this fraught, bleak landscape of post-high-capitalist apocalypse which we have to both endure and decode, as we speak.

“Being 30 years older than our rose-tinted selves, we say: it is what it is. What is now interesting is how, like the au courant COVID, these human slippages bubbled up out of what we thought was immunity oblivion to molest us in ever more subtle, complex and cunning reincarnations. Lyotard may have foreseen tyranny on steroids fueled by the Internet, but did we ever see Command Capitalism, hectored by the last great extant Communist Party on earth, try and asphyxiate its smaller prey with Capital and Debt, wielded with adroit blunt force reminiscent of the West in its age of imperial disdain?

“This Philippine government is an elegant if badly wrought conundrum, salvaging its own political Left flank while French kissing the glutes and orbiculi of China’s Communist Sovereign. The prodigal noun contradiction couldn’t have resurfaced at a better time. And Art, and artmakers do have a choice; in fact, they find themselves not so much at a crossroads as at a Cloverleaf exit, hurtling forward with at least seven exit options to try and turn to, in a blink. GPS might do this for some, but for DengCoy Miel and me, Jose Tence Ruiz, both now much older 30 years forward, the choice is made based on imbibed local knowledge, an intuitive yet learned appraisal of the landscape, a tool in part availed from the insights of the late Alice G. Guillermo in her many writings that came with the ’70s and updated yearly as our globe split into more and more unpredictable clones of itself until her passing in 2018.

“The act of cherishing and at once being implicated, apropos to the times, infects the creative modus of both Miel and myself, as we extrude images close to our inner gearwork, cherished, attended to, focused, tabled, favored, prioritized with the corollary of us being enmeshed, absorbed, identified, labelled, and hopefully remembered, if only through works, visualizations of this societal sludge which we, like most everyone else, are tenaciously parsing.”

If anyone still has any doubt that we are living in a brave “new normal,” note that “Cherished Implications” will be on exhibit from Sept. 27 to Nov. 8 at Alfredo Esquillo’s Eskinita Art Farm, the latest manifestation of the emerging trend which is the art destination, exemplified by the likes of Pinto Art Museum in Antipolo, BenCab Museum in Baguio and Museo Orlina in Tagaytay.

“Eskinita Art Farm was conceived last year when I had a chance to acquire a farm lot in Barangay Janopol Occidental in Tanauan,” says Esquillo.

“It already had three structures. One of these structures happened to be an ancestral house which we ideally renovated to be the centerpiece of the overall gallery compound within an actual farm. The other is an unfinished house which I converted to be my own studio. And the last is a three-story house which will be the main gallery. It will have a good view of Taal Lake.”

The Art Farm is meant to be an extension and expansion of Eskinita Art Gallery in Makati.

“In Eskinita Art Farm, we have lots of programs to offer. We’ll have our regular exhibits that will run for six weeks (we can accommodate two shows for our ancestral gallery and two more shows per schedule when our main gallery is finished). We’ll have our own art residency program where our Tuklas Program will be integrated into. “Our Tuklas Program started at Eskinita Art Gallery where we provide mentorship to and sponsorship of shows of young artists. This was created in collaboration with my mentor, Renato Habulan. We’ll also have community programs wherein our art residents will give workshops to students in Tanauan. We’ll have farming programs integrated as well in our activities. We are also planning to have livelihood programs for Tanauan residents. Also in the works, an art festival in Tanauan.

“The town of Janopol, Tanauan, besides having a great potential for tourism, also offers a good thought into the idea of farming as an essential part of our daily lives. With this pandemic, survival comes into great consideration. Eskinita Art Farm’s creation during this pandemic is very timely because it offers options into our art scene that also needs to survive. We hope we can help.”