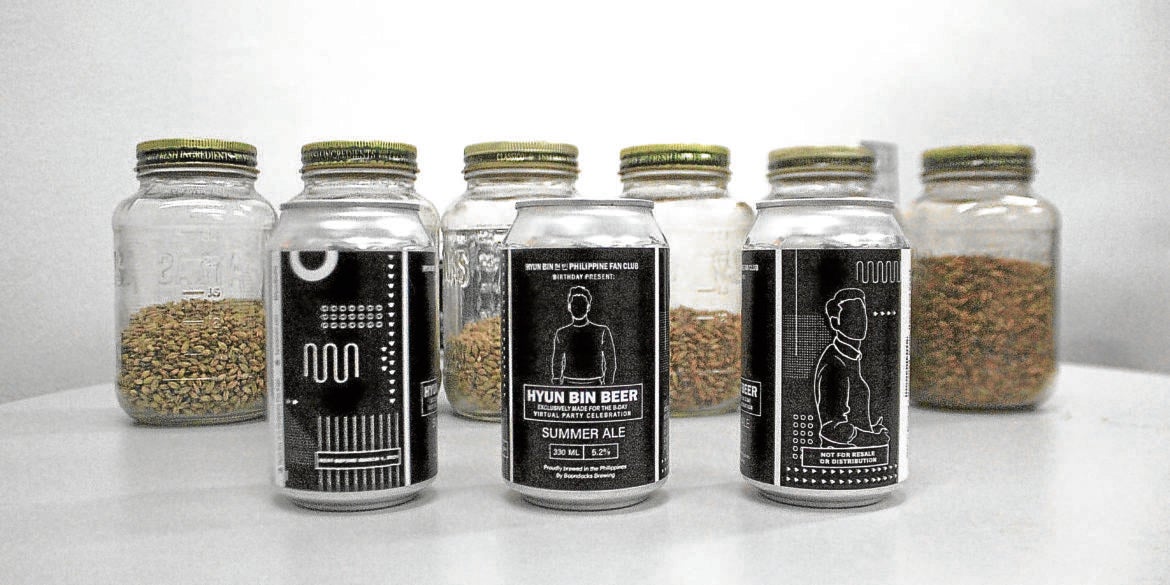 Fans of Korean actor Hyun Bin, of the wildly popular K-drama series “Crash Landing on You,” celebrated their idol’s birthday Sept. 25, albeit in muted ways, given the restrictions of the pandemic. One local fan club went the extra mile with a contract brew from Boondocks Brewing Company.

The canned beer, sporting an image of the actor, was simply called “Hyun Bin Beer” but was not sold at stores. Boondocks’ Fred Calope said he was approached by the president of the Hyun Bin Philippine Fan Club (HBPFC) and asked if he was up to the task; he was.

This was not the first time Calope had entered into a collaboration. In a phone interview with Lifestyle, he said that they had earlier made a beer for the band Hey Moonshine. That beer was described by one customer as having “a slight banana aroma, low to medium bitterness with a hint of citrus. Clean and refreshing with a dry finish, and pairs well with food.”

“We actually brewed that beer for them. It was called Wicked Man Ale,” Calope said. The Hyun Bin beer is really one of Boondocks’ four existing variants, Summer Ale. The three other variants are Session Ale, Wheat Ale and Strong Ale. The beers are sold in cases of 24 cans or in packs of four.

It’s been a decade since Calope decided to come home to the Philippines for good after working in the United States as a lawyer. His reason for returning? A desire to provide Filipinos with more options when it comes to beer.

In 2011, he started out brewing beer on his kitchen stovetop. Two years later, he rented a space in Cubao. He finally launched Boondocks Brewing Company in 2016 and moved the microbrewery to its present location in Marikina in 2018.

Over the past four years, he has noticed how most Filipino beer drinkers prefer beer that is crisp, fresh and citrusy because of the country’s year-round humidity.

“Filipinos have a sweet tooth. But even though we, as a culture, like ampalaya or pinapaitan—food that is bitter—we don’t really enjoy bitterness for bitterness’ sake. That’s the reason we find pale pilsen bitter. We like our beers crisp, easy to drink and not bitter,” Calope said.

Of Boondocks’ four variants, the ones he claimed are more “approachable and accessible” are their Summer Ale and Wheat Ale. The latter is made with wheat and uses a different kind of yeast, which makes it more citrusy.

“We want to broaden the palate of Filipino beer drinkers. They often start with the Summer and Wheat ales, but they might eventually want to try the Session Ale, which is like an American pale ale. It’s more ‘hoppy’ and bitter. Our Strong Ale is 8.5 percent alcohol. It’s stronger than Red Horse Beer, which is 6.9 percent alcohol, but at the same time it’s more flavorful and full-bodied.”

Some people might see Calope’s decision to uproot his family and come back to the Philippines as rash, but he claimed he is in this for the long haul.

“Craft beer brewing is really a passion of mine. One doesn’t get into the craft beer business with the hope of seeing a return on investment in 36 or 48 months. My time frame for how long I’m going to be brewing beer is until I pass it on to my grandchildren.”