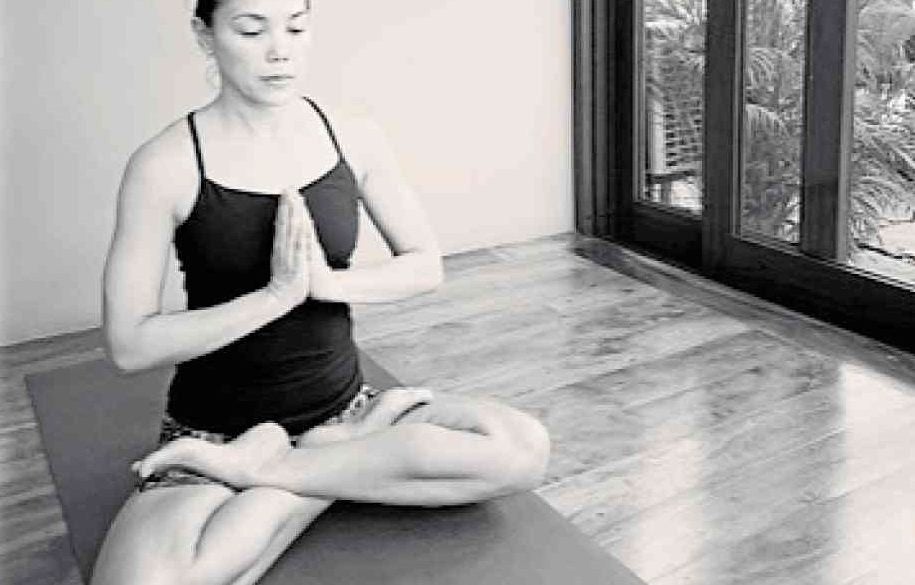 This yogini is also an essential oils ‘addict’

Keeping in shape is not just about maintaining a slim waistline and staying physically strong. Marilen Elizalde, wife of Santi Elizalde, president of Anya Hospitality Corp., the company that runs the weekend sanctuary Anya Resort in Tagaytay, also keeps herself spiritually fit through yoga and, recently, essential oils.

Like many women in their 50s, Elizalde works hard to stay in top form today. At a young age, she was always conscious about food—what she could indulge in and what she wished she could have more of but had to take in moderation.

Staying active was a given. She took up jazz and tap dance when she was 11 or 12.

“After high school, having realized that my dance career was not going to take me anywhere, I had to look for a form of exercise to keep me fit. That’s when I discovered the gym!” Elizalde said to Lifestyle.

It was also around that time that she discovered the magical term “personal weight training” and was thrilled about the thought of not feeling guilty for occasional indulgences.

This foray into the gym worked out so well that she later found herself joining the new craze in town: aerobics. Soon she started joining aerobics marathons and even snagged the second-place trophy in one of them.

“I guess you could say that I loved exercising. Being married didn’t stop or change my need to work out,” Elizalde said.

But it was not until the birth of her third child that she discovered Hatha yoga—and it was love at first breath. Elizalde had unlocked the door that would start her 18-year spiritual journey through yoga.

“It was a total mind, body and spiritual practice. It helped calm me down. It gave me solace when I needed a few hours to recharge. And it also keeps me grounded,” she said.

Yoga became the center of her fitness program, such that, in 2007, she earned her certificate to teach.

“I still practice five to six days a week, but I have been kinder to my body,” she said. “My practice continuously changes, depending on my body’s performance. Sometimes I do my full two-hour practice; sometimes, I only do half my practice.”

She is up at 6 a.m. and on her mat at 6:30 a.m. She teaches private yoga classes in the morning, then practices pranayama and meditation, and asana or yoga postures after.

The key to portion control, it seems, is Elizalde’s application of the 5:2 ratio. She eats well and healthy five days a week—no sugar, no carbs—and gives in on the weekend.

“Yoga is a learning experience that helps us move closer toward stilling the mind,” Elizalde said.

Now 54, Elizalde said she gets “adjusted” once a month by an osteopath.

“The practice can take its toll on the body. Ashtanga Vinyasa yoga was a practice designed for a 16-year-old boy! Whether I would like to admit it or not, I do end up injuring myself occasionally,” she said. “Being injured does not completely stop me from practicing. The key to healing is to keep moving continuously, so I modify my practice when I need to.”

Elizalde is studying to become a certified aromatherapist to deepen her understanding of essential oils.

“Yes, I am an oil addict!” she said. “It is not a fad. Essential oils come from plants. Historically, people have been known to use plants not only as nourishment but also therapeutically and medicinally, for religious practices and rituals.”

Essential oils keep her above the wellness line, she said, to keep her immune support system strong enough so that her system is “ready to battle a virus and nip it in the bud.”

For example, she said, lavender’s main constituent, linalool, has therapeutic actions such as relaxing, sedating, balancing and detoxifying, as well as anti-inflammatory and antiviral properties.

She added that a study on lavender oil started in 1908, when a French chemist named René-Maurice Gattefossé researched its healing properties in Morocco. The chemist suffered burns when there was an accident in his lab. As a last resort, when all medicines failed, he supposedly used lavender oil directly on his skin, the way he had observed Moroccans use the oil, and his burns healed over time.

“Of course, if I am really sick or injured in some way and I need to see a doctor, I will not hesitate to go to a doctor. No question about it,” she said.

“Be open to studying the science behind it before making assumptions,” she said. “Allow the body to experience the therapeutic action of essential oils aromatically, topically, and even internally. And then watch it change your life.” —CONTRIBUTED INQ