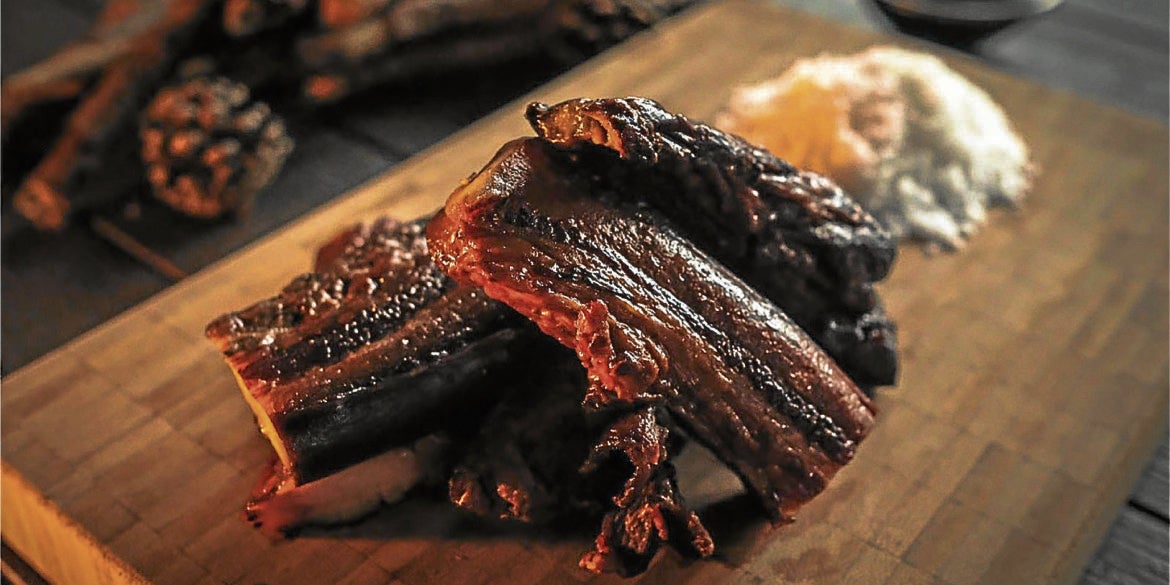 “Etag,” salted, dried and smoked pork of the Cordillera

“Mga Kwentong Pagkain,” the writing competition sponsored by Mama Sita, had its awarding ceremonies last Saturday. There were some 50 entries from all over the country. There was one winner each from Luzon, Visayas and Mindanao. All three wrote of food that reminded them of home.“Etag, and Other Preserved Things” won top prize for Luzon, and was written by Bea Mandapat, a student.Visayas had “Spicy, Milky Chicken Dish of Bohol” by Procopio Resabal Jr., a cultural development planner and freelance writer.

For Mindanao, it was “Satti’ng Paggising” by John Bevir Serag, a Filipino teacher.

Etag is the dried and salted pork that flavors the pinolpogan that Mandapat’s father cooks, which the author describes as “similar to tinola but using seared native chicken instead of the white fluffy hens.”

It is what her great grandmother Lula Emiliana used and reused almost endlessly to flavor vegetables for her brood of 13 children and five more adopted, after relatives had died.

Mandapat mentions the cultural/historical background of the etag, from the wild boar offered by hunters to the god Kabunyan to the use of the alnus tree (Alnus japonica) to smoke it.

The “Spicy, Milky Chicken Dish of Bohol” is locally known as halang-halang manok tinunuan. Author Resabal not only shows the importance of the dish to his family’s cooking, but also to the history of the town of Toril, where the people from the Poblacion of Maribojoc town evacuated.

During World War II, when word got around that the Japanese were going to round up the men in Toril, their escape, as well as that of the young women of the town, was made possible by the older women, who cooked the halang-halang manok tinunuan for the invading Japanese army, so that the chicken feast plus their song and dance entertainment delayed the search.

The description of how the dish is cooked gives readers from other parts of the country some ingredients that may not be familiar, like the local basil, called sangig or malikid.

The contest accepts essays written in Filipino, and that is how Filipino teacher Serag submitted his “Satti’ng Paggising,” considered breakfast food in his Zamboanga. Satti is our version of Southeast Asian sate or satay, but the difference is the sauce.

For Indonesians, Malaysians and Thai, the sauce is peanut-based. Our satti has tomato sauce, but it also has a spice mix particular to Muslim Mindanao, and that is palapa.

The way to eat satti is to mix in the rice, called tamuh, similar to the Cebuano puso, where the rice is cooked in coconut leaves.

The author said there are stories of how a Filipino businessman brought the satti to Zamboanga from Malaysia in the 1970s, and that the word satti is from Shayta, what Muslims call Satan, because the heat and color of the satti are likened to that of hell. But he also likens the satti and its mix of ingredients to Zamboanga and its mix of tribes and culture.Because the short list of top entries was posted on the Mama Sita Facebook page, a special prize was given to one which garnered the most “likes.” This was “Lelut Tugak” by Aries Alviz Mercado.

By the title, some of you may guess that this is about a dish in Pampanga, rice porridge with frog—but not just any frog. It has to be tugak marangle (palakang bukid or field frog). The author gives not only the recipe for lelut tugak, but also the different ways the Pampanga table serves the field frog—betute (stuffed with ground meat), adobo (braised), kamarun (like camaron), tinola (boiled) and prito (fried). INQ