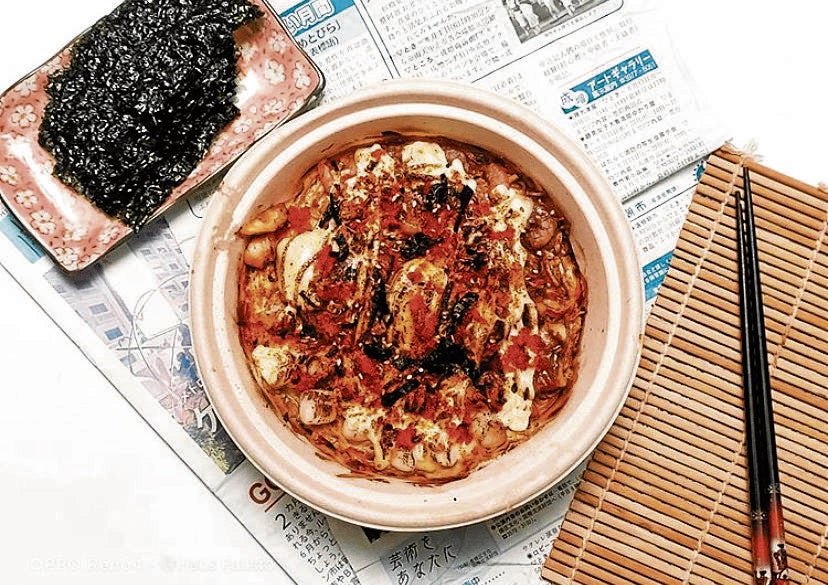 We thought we were over sushi bake—until we tried these

I think of it as sushi bake season—that period of the lockdown when my mother and I refused to let a week pass without ordering another tray of sushi bake.

We were hooked, like so many other people. We just couldn’t stop.

Sushi bake is the casserole version of the good old maki. An assortment of maki ingredients—sushi rice, kani, mangoes, salmon, roe, Japanese mayo, cream cheese, etc.—are layered in a dish and baked until it’s ready to be scooped and wrapped in pieces of dried seaweed or nori for eating.

It is by no means a pandemic invention—we’ve found sushi bake recipes online from as far back as 2010—but it was during the pandemic that it became a craze. So many sushi bake sellers sprouted up, that it was hard to choose who to order from.

We liked thekitchen.mnl’s (@thekitchen.mnl on Instagram) The Classic (think of it as California maki in sushi bake form) and The Crunch (salmon, cream cheese, roe, eel sauce topped with panko breadcrumbs) and ordered both multiple times. We enjoyed Sushi Bake by Ethan (@sushibakecvt on Instagram), too, and loved the idea that it was made by a 17-year-old.

We tried Sushi Nori’s version, ordered from Sushi Bake PH (@sushibakeph on Instagram) and a handful of other home cooks. On a particularly desperate night, we even ordered surprisingly affordable sushi bakes from GrabFood. We liked that we could get them instantly and didn’t have to wait a whole day to dive into the goodness.

And just as they varied in price, the sushi bakes varied in quality, too. Some were absolutely delicious, some were just okay, but even those were still satisfying.

Our cupboards were always packed with nori, waiting for our next order (we always made sure we had extra seaweed because the trays never come with enough).

And then we stopped. I don’t know if it was sushi bake fatigue or if there were just too many other food options to choose from (and there are).

I honestly thought we were over sushi bake. But then the second wave hit.

It was my friend Carl who kickstarted the second wave. On a day I was nursing a hangover after having too much birthday tequila, he sent over an Aburi Salmon Sushi Bake from Only Pans PH. He couldn’t stop ordering from them, he said, and wanted me to try. Only Pans PH’s sushi bake was so good—it was cheesy and loaded with salmon. There were even two big salmon pieces on top. They definitely don’t scrimp on ingredients. My family and I attacked the pan, exclaiming over how good it was.

The very next day, I ordered two more pans. Only Pans PH offers an assortment of flavors: baked spicy salmon, baked spicy ebi kani, baked chagi, baked cali maki, aburi seafood, aburi scallop and aburi salmon. They even have mixed pans. Their sushi bakes come in two sizes—the regular one that’s good for two to three people or the party tray for eight to 10. Two other reasons to love Only Pans PH? They offer cauli rice for those who want a low carb option, and their sushi bake comes in eco-friendly pans. And they often have promos—as of press time, they had a two-pans-for-P999 offer.

My cousin served Cheesy Scallops from Sushi Bake QC in her home in Parañaque, and one bite was all it took for us to realize why. Love scallops, love the cheese, also love the fact that the people behind Sushi Bake QC have used a portion of their profits to donate masks, alcohol and food to those affected by the pandemic.

If there’s a restaurant that you’re sure would make a great sushi bake, it’s Ooma. “The flavors of a sushi bake are very in line with Ooma’s flavor DNA of umami, bold flavors, and crunchy and creamy textures. It played into the kind of food we create well at Ooma,” said Abba Napa, cofounder of The Moment Group, the company behind Ooma, Manam, 8 Cuts and more.

And so when loyal customers started asking for them to create their own version, they responded in a really delicious way. “What makes ours uniquely our own is that it’s an aburi bake, which is Ooma’s signature style of doing sushi. It is complex in flavor and layered with ebi and soft-shell crab tempura, kani and ebiko then flame torched,” Napa said.

I ordered Ooma’s Ebi Aburi and Soft Shell Crab Tempura Bake after another cousin raved about it. And as expected, we loved it. I wasn’t surprised, because one of my many Ooma favorites is the Soft Shell Taco Maki.

The Ebi Aburi and Soft Shell Crab Tempura Bake, which is a takeaway and delivery exclusive, is doing very well, said Napa. “We’re very happy and people seem to really like the aburi bake. Who knows, we may do another version someday.” Can’t wait for that.

The sushi bake craze didn’t just bring to us a really comforting dish at a time we most needed it; it also inspired chefs and cooks to play with the casserole concept and transform other beloved dishes into a bake.

That’s exactly what Babu did when they introduced their Laksa Bake last month—they managed to capture the flavors of the iconic Peranakan noodle soup in a tray. The elements are there, minus the soup and the noodles: sauteed prawns, squid and fish cake drizzled with a laksa-inspired sauce over sushi rice. It’s such a satisfying treat. One tray is good for four to six people.

But if you want laksa in its classic form, you can also go for Babu’s DIY Chicken Laksa Kit or DIY Seafood Laksa Kit.

Chef Pat Go, whose “Parasite”-inspired ram-don we still dream about, has created two Korean bakes that are going to fuel our next fantasies.

The Army-Style Bake is a must-try too. Inspired by budae jjigae or army stew, the Army-Style Bake includes smoked bacon, Spam, sausage and egg on top of kimchi rice. It’s drizzled with ssamjang, Japanese mayo and cheese, and then baked.

Can’t decide between the two? You can go for both if you order the Mixed Korean Bake. And if you’re not a kimchi fan, don’t worry—I’m not crazy about kimchi either, but I really loved these bakes.

The bakes are good for four to six people. It’s a great meal to enjoy while you watch the new K-drama that has stolen your heart. The only thing missing is an oppa to share this with.