Vanessa Hudgens on playing three characters in one movie: ‘It’s just about as crazy as you would think’ | Inquirer Lifestyle ❮ ❯ 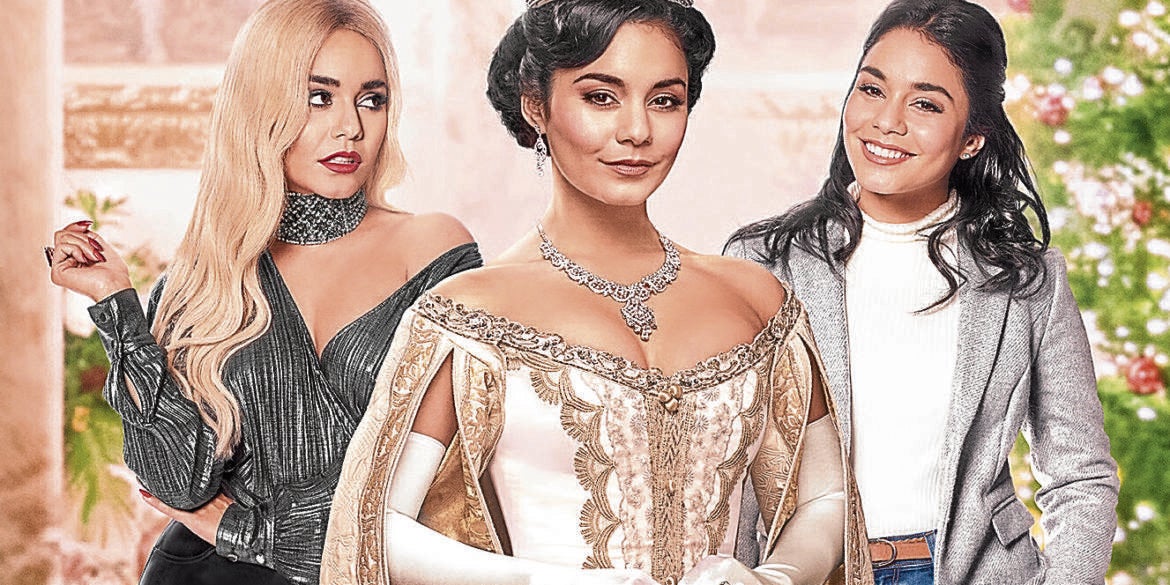 In the 2018 Christmas film “The Princess Switch,” Vanessa Hudgens had the challenge of playing two characters: Stacy DeNovo, a young baker from Chicago, and Lady Margaret Delacourt, Duchess of Montenaro.

In the sequel “The Princess Switch: Switched Again,” which started streaming on Netflix on Nov. 19, Hudgens played three characters: Stacy, now princess of Belgravia, Margaret, who’s about to be queen of Montenaro, and Margaret’s party girl cousin Fiona who’s, well, a bit of a troublemaker.

“It’s just about as crazy as you would think,” said Hudgens.

And when she let it slip that a third “Princess Switch” movie is definitely happening, we had to ask—will she be playing four characters in that one?

“Definitely not. Shutting that rumor down really quickly because then I would really lose my mind,” Hudgens said, laughing. “But it’s going to be another fun ride and I really loved playing Fiona. We’ll have quite a bit more of her for the next one. That’s all I’m gonna say.”

In this Zoom interview, we talked to her about switching lives, shooting during the pandemic and why she can’t get into the Christmas spirit just yet.

How crazy was it playing three characters this time?

I’m always down for a challenge so I was like, let’s do this and see what happens. It was a lot of fun though because I really got to be hands on with the new character Fiona and just develop her from the ground up. They gave me complete freedom to give her whatever accent I wanted and really help build how she looks. She’s just very over the top and extremely dramatic and that is a bit of me as well. It was really nice to be able to bring that into the picture. But man, after a 13-hour day of being on set and doing switches and acting with different versions of myself, my brain was just very frazzled.

How did you prepare to play three different characters?

Obviously, Stacy’s circumstances are different than mine but she’s basically me. I didn’t have to put on any accent or anything. I definitely did study the royal family and took bits and pieces from different princesses. With Margaret, the thing that I started first with was her physicality. As someone born into royalty, I feel like you carry yourself a certain way. Fiona is basically me when I’m feeling really over the top and dramatic.

What was great about shooting the sequel?

Reuniting with family, that’s what it really felt like, because in the first film, we were in Romania. We all stayed in the same hotel, we were in a little town, there was one restaurant that we could go to. We would all be together all the time. So being in a new place, being in Edinburgh, Scotland, which is such an incredible place, just felt like a big reunion and play time for all of us. I love this crew and cast so much so any excuse that we have to all be together is one that I always look forward to which we get to do again with the next “Princess Switch.”

What was it like also being a producer of this film?

It was really great. I think that as an actor on a project, you always have a point of view and suggestions for the project but you don’t want to overstep any boundaries. Actually being a producer meant that I wasn’t overstepping any boundaries and I got to be really involved with the script and with the development of all the characters and have a say in wardrobe and the hair and makeup and just make sure that this is the best that it could be to bring to you guys.

Which of your love interests (Sam Palladio and Nick Sagar) did you enjoy working with the most and which one personally floats your boat?

You know, I love those boys so much. They are beautiful humans . . . I’m not going to pick one friend that I like more than another. But they’re fantastic and we had a wonderful addition to the family this year—Lachlan Nieboer who plays Tony. He was fantastic and I’m just so grateful to work with a talented and compassionate men.

Is there someone you would be cool with switching lives with today?

I have been asked this today and I couldn’t give an answer. I feel like if I could switch places with someone, I want it to be someone of like extreme power so that I could do everything that I could for the day to try to help the world. But other than that, I don’t know, I’m very happy and grateful with my life, I love what I do and I love the people in my life so I don’t really want to switch with anybody.

You just finished shooting your next project “Tick, Tick . . . Boom!” What was it like filming in the midst of the pandemic?

It’s hard. It’s really hard. It’s very challenging. As an actor, you’re used to going on location and being away from your family and friends but doing it during a pandemic is an added level of difficulty. In order to do it and to stay safe, we had to be in a bubble and you can’t break that bubble. On set, everyone is always in a mask and a shield and it makes it really hard for conversation. One of my favorite things about being on set is getting to know the crew and talking to them in between takes and it’s so hard to do that when they’ve got all of this stuff on and you can’t really hear them. You get tired of yourself saying, “Sorry, excuse me?” And by like the fourth time they say it, you kind of just give up. It definitely makes human connection harder. I mean that’s for everyone in the world so I think it’s something that we can relate to. It takes a lot of people to make a movie. So, you know, COVID tests almost every single day, and contact tracing, and just being really on top of it and vigilant about everyone’s safety, which Netflix did so well. And thank God because we need the arts, you know, now more than ever. We’re all sitting at home watching movies and TV constantly—at least I was. So we need new films and new shows. The fact that Netflix is willing to do that and spend the extra money that it takes in order to actually get this done in this time is really incredible.

How hard is it really for a woman of color to make it big in Hollywood?

Oh my gosh. It’s hard. I love that I make it look easy but you know, I’ve been in the industry since I was nine years old. I’ve been at this for over two decades, which just feels really weird to say, considering the fact that I still feel so young, but it’s a hustle and it’s about being vigilant, when you believe in something and not taking no for an answer and continuing to fight for what you believe in and if you’re not given the opportunity to make the opportunity for yourself and just continuing the hustle. It’s all about the hustle.

In light of the #MeToo movement, have you experienced being in an inappropriate situation with someone powerful and how did you deal with it?

Yeah, of course. I think as a woman you are subjected to that on a daily basis. I do remember a time that someone said something inappropriate to me and I was so in shock and I was like, “What are you talking about?” I’m very quick to speak my mind and shut things down very quickly. It’s a movement that I’m very grateful for because so many women are coming forward and telling their story and there’s so much courage in that and I think that by sharing stories, we’re going to be able to move forward in a better, more conscientious way.

How do you plan to spend your Christmas this year and have you gotten into the Christmas spirit already?

I’m actually still stuck in Halloween. I decorated so intensely for Halloween. I do love seeing the holiday spirit and everyone’s ways of decorating and I think that it’s 2020 and all rules go out the window so I had a friend start decorating before Halloween, which actually kind of upset me, but to each their own. I am planning on being with my mom and my sister, where exactly yet, I’m not sure because I’m going to be working. But as long as I’m with my family I’m happy.

Have you ever spent the holidays in the Philippines?

I have not spent the holidays in the Philippines. I hate to say that I’ve never even been to the Philippines. My mom left when she was 25 and just went back for the first time a few years ago. I was in Italy when she went, otherwise I would have gone with her. But it is at the top of my list, as far as places I want to go to when we can all travel.