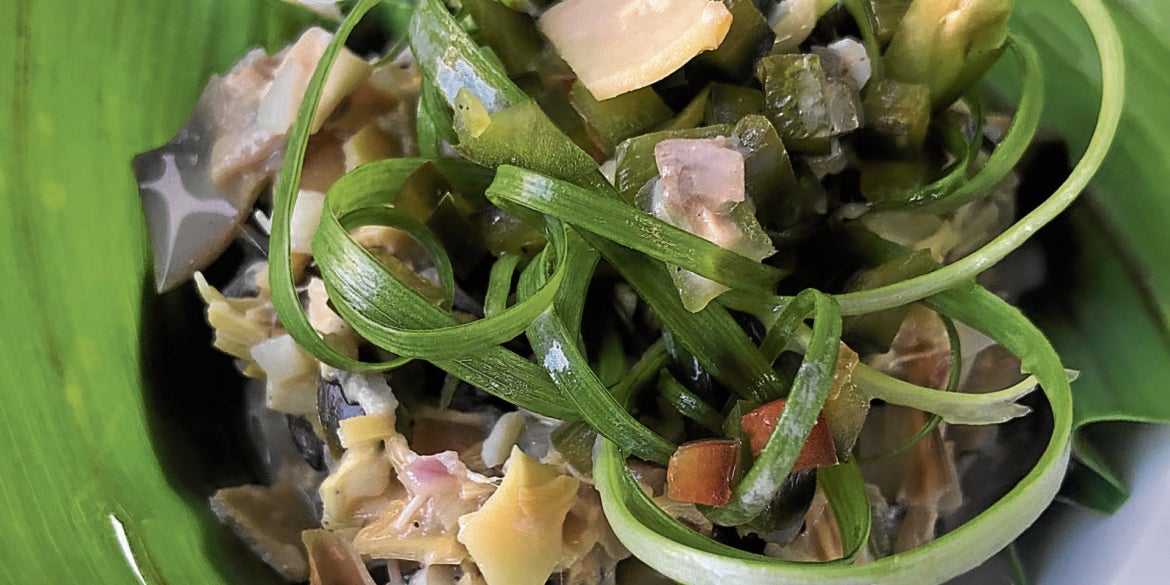 It was hard to refuse an invitation to eat all around Iloilo and judge a cooking competition. Though I’ve been to this province multiple times, I missed indulging in the regional food items.

My good friend and founder of the annual Tabu-an Western Visayas Ilonggo Heritage Cooking Competition, Rafael “Tibong” Jardeleza, probably knew I wouldn’t turn him down if he packed our itinerary with places—and dishes—I would go all the way to Iloilo for.

What made this particular food trip even more worthwhile was the discovery of more homegrown fare. I’m a bit embarrassed to have learned only now about the Ilonggos’ version of adobo. Thanks to the Richmonde Hotel Iloilo and its modified breakfast buffet, I more than made up for all the times I went to this province and didn’t get to enjoy this dish.

Their chicken adobo is similar to adobo sa pula, with annatto seeds providing the reddish hue. It uses all the traditional ingredients—bay leaf, peppercorn, garlic, a little soy sauce and vinegar—but what sets it apart is the addition of lemongrass, which gives it a more appealing flavor and aroma.

From ‘baye-baye’ to ‘pancit molo’

It was also my first time to chance upon the kakanin called baye-baye, which is a specialty in Pavia, Iloilo. The banana leaf-wrapped morsel unravels into a brown, rectangular mash made of grated young coconut and ground corn kernels. It is subtly sweet and soft to the bite. Apparently, there’s another version where ground pinipig is used instead of corn.

At the La Paz Public Market, the Pradilla family has been serving their over-the-top halo-halo for more than 40 years. The shop is called Nida’s Halo-halo and their version has 14 ingredients, namely fruit cocktail, fresh papaya, gulaman in different colors, pinipig, ube halaya, sago, coconut strips, saba banana, corn kernels, cubed mango, cornflakes, pineapple, leche flan and barquillos. All these sit on top of shaved ice before being bathed in evaporated milk.

I have been to Panaderia de Molo and sampled many of their best-selling baked goods such as galletas, hojaldres, rosquetas and kinamonsil, but only when we visited the kitchen of Hyacinth Larraga Catral did I learn about their fried pork or chicken pancit molo balls.

Not happy with the meat she would get from the market, Haya decided to grind the meat herself to get her preferred size and avoid fast spoilage. The mixture is seasoned to her liking, enclosed in a thin wrapper, then lightly fried before being dried and bagged. The tiny dumplings can be served in a soup or flash-fried for a crispy snack.

One dish that left quite an impression was the salam-ukan, which translates to nabulunan (gagged or choked) in Filipino. It’s a soupy dish invented by Boyet Susvilla’s mom, which he has enhanced and is now serving in many branches of their restaurant, also named Salam-ukan, in and around Iloilo City.

Boyet’s mom started selling it in 1969, and his sisters took over the shop in 1981 when she decided to retire. Seven years ago, Boyet got into it too by selling his own version. The original recipe only had cooked pata, but he has added cow’s meat, intestine, heart, tendons, tripe, lime juice and herbs, turning it into something like a spicy pata nilaga. It’s a comforting, zesty, hearty and bold-flavored bowl of soup developed over six long hours.

Now on its seventh instalment, the Tabu-an cooking competition includes chefs and home cooks tasked to come up with three courses showcasing flavors and ingredients from their province.

Due to the pandemic, the contestants were limited to just a total of six head chefs (they each got two assistants), and the event was held in the open-air activity area of the SM City Iloilo Southpoint. The place was cordoned off to prevent the crowd from populating the area, and everyone was advised to wear masks and conduct social distancing at all times.

The participants had to work with any of the items found on the table, which included an assortment of fruits and vegetables like batwan, taro and sigarilyas, as well as fresh whole ducks, baby octopus, beef shanks and cow’s tongue.

From those, the contestants had to make an appetizer, main dish and dessert that scored high in creativity, presentation, and the clever use of ingredients and traditional flavors.

Along with fellow judges Francis Lim of Tipple and Slaw and Nav Thai restaurants, and Kalel Chan, the corporate chef of the Raintree Group of Restaurants, I admit to not just being impressed by the cooks’ ingenuity, but also at how they composed themselves during three hours of time pressure.

Among the standout dishes were the salad of banana heart with a coconut-based dressing and duck estofado. One team even made tablea sorbetes using cassava flour. They churned it by placing the mixture in a container enveloped by salt and ice, and manually shaking it for almost an hour. They served it alongside bibingka studded with fresh coconut meat. Chef Karl Hibionada and his teammates bagged the best dessert trophy with that dish.

Together with Raffy Hibionada and Joshua Querna, Karl also won the overall championship as well as the best main course.

The lone female chef in the competition, Sharmaine Gutierrez, along with sous chefs Miko Gustily and Alphonse Dedel, got the best appetizer recognition and first runner-up.

Even after multiple visits, Iloilo, tagged as the country’s food haven, still continues to impress not only in regional food, but also in culinary talent.

Special thanks to Nat Lim and the Richmonde Hotel Iloilo.