Playing like an angel to save four-legged angels | Inquirer Lifestyle ❮ ❯ 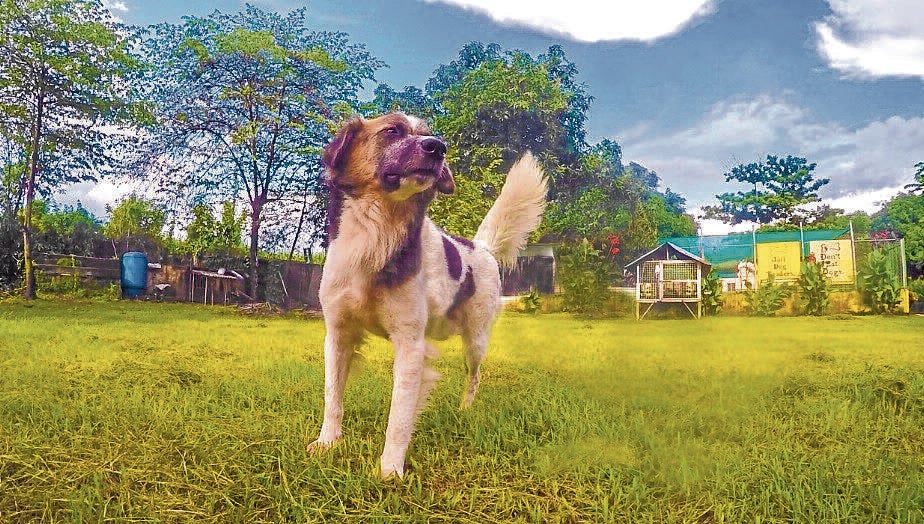 A rescued dog, the marks of a tied muzzle still visible around its mouth, roams freely at the shelter. —TRISTAN MARK MANALESE

We all know someone who plays the piano, the guitar, the violin. But the harp? Maybe not.

There’s something almost mythical about this beautiful, unapologetically romantic, and decidedly ancient instrument that has been around for thousands of years. Literature describes it as the instrument of choice of divine musicians, with sweet tones that leave people hypnotized; even the Bible’s King David was a harpist.

“I played piano at a very young age,” says professional harpist Holly Philips Paraiso. “One day I saw a harp in an orchestra, and fell in love with the most majestic instrument I had ever seen or heard, the instrument of angels and King David. I begged my parents to buy me one, and for lessons. They eventually gave in.”

Paraiso remembers practicing day and night, until she became a professional at age 19, performing at events and in public venues. It didn’t hurt that the fair-skinned musician, always beautifully dressed in a formal gown, looked quite angelic herself.

“It’s more difficult to play a harp than a piano,” she says. “People don’t realize there are seven foot pedals for key changes. So while your hands are playing, your feet are moving, too.”

“The harp is not played with a pick or bow, but with direct contact of human fingers on the strings,” reads Paraiso’s website, where people can listen to her music. “This is what imparts a full, soul-stirring, profound experience like no other.”

The San Diego, California-born Paraiso, who has Irish blood—hence the dark red hair, perhaps?—moved to Maui, Hawaii, at age 20 to play in a hotel, where she met her future Filipino husband, Rolando.

The four Paraiso children were born in Maui: Aaron, who now lives in Australia, and Ella, and twins Avery and Avonlea, all living in Manila. Avery is a model and actor who was a finalist in the GMA 7 reality show “Starstruck.” Avonlea is a professional harpist like her mother, and often performs in duets with her.

Twenty-two years ago, Rolando decided to return to the Philippines. Paraiso has played professionally since then. “I do a lot of weddings and baptisms, as they are such joyous occasions,” she says. “And I do a lot of corporate gigs—at least, before COVID.”

In fact, it was upon hearing her music that Greg Quimpo, president of the animal welfare group Animal Kingdom Foundation (AKF), first approached Paraiso, asking if she would give a fundraising concert for the group’s rescued dogs.

“My family and I are animal lovers, having eight rescue dogs, two rescue cats and a Philippine serpent eagle we found in our backyard a year ago, in bad shape with a broken leg and unable to fly,” reveals Paraiso. She did play for an AKF fundraising event in Quezon City some three years ago.

AKF, meanwhile, is a nonstock, nonprofit animal welfare organization with a rescue and rehabilitation center in Capas, Tarlac. While its activities include participating in rescue operations during calamities, a rehoming or adoption program, an outpatient clinic for dogs of indigent owners, a training ground for veterinary students and the neutering of dogs, this group has doggedly (pardon the pun) zoomed in on one particularly grim area of animal abuse: the horrific dog meat trade.

AKF regularly joins the Philippine National Police in carrying out raids on dog slaughter facilities and intercepting the transport of live or dead dogs, and confronts the most terrible sights animal lovers can ever imagine.

The rescued animals are brought to the AKF rescue center as well as city pounds. Through the years, AKF has rescued more than 800 live dogs and helped put countless traders and dog killers out of commission, thanks to operations in places such as Cabanatuan, Nueva Ecija, Tuguegarao, Pangasinan, Nueva Ecija, Tarlac, Baguio, Bicol, Iloilo and Negros.

“I’ve always admired what AKF does,” says Paraiso. “They not only rescue dogs from slaughter by actually coming between the dogs and the dog thieves, but they rehabilitate them in their shelter and eventually rehome them to qualified adopters.”

Paraiso was game for a concert, until an accident several months ago waylaid plans: She shattered her wrist when she tripped and fell while climbing a cement staircase.

“A titanium plate and screws were put in my arm, and I got quite depressed thinking I would never play again,” she recalls. “Greg called during this very low period about a promise I had made to AKF years ago. I had told this wonderful organization that I would be honored to do a benefit concert for them to raise money. I explained that I didn’t know if I could ever play again, but would keep him updated.”

The more wonderful part was, Paraiso worked hard to get better, keeping the little canine angels of AKF in mind as motivation. “A few months of physical therapy later, I can play the harp again! So I’m ready to go for this online benefit concert. AKF was the first I called with the news. I can finally fulfill my promise to the dogs!”

At this stage, Paraiso doesn’t need to practice every day, but happily learns songs requested by clients, or plays her favorite love songs and Broadway classics.

“I think music is especially important now that we have COVID-19. Already, it’s hard to stay at home and deal with difficult changes during quarantine, but imagine not having music to lighten your mood!”