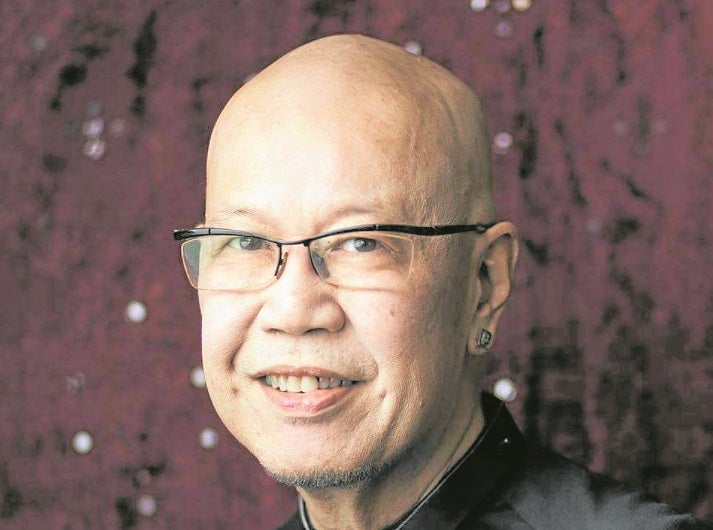 ‘What he hated was the conventional way theater was done. He was always innovating, pushing theater to new realms’

Vicente Alfredo Ruiz “Freddie” Santos, a multiawarded pillar in the theater community, passed away on Dec. 17 at the age of 64. He was also a renowned concert director and producer who paved the way for the rise of OPM and its artists.

Reports attribute his death to an enlarged heart and complications arising from diabetes, which he had been battling for some time. Survived by his elderly father and a sister, the man’s memory will continue to live on in the hearts and minds of his peers and proteges, who as of press time, are collectively preparing a virtual tribute to him.

Though Santos first honed his craft in Repertory Philippines (Rep) about 50 years ago, starting as a bit player in the 1976 play “Juno and the Peacock,” he later performed in other theater companies like Rolando Tinio’s Teatro Pilipino, which was based in the Cultural Center of the Philippines. This was in an era when cross-theater-company interaction, which many of today’s artists enjoy, was unheard of. This perpetual pioneer was also bringing others along with him in his journey.

As thespian Jeremy Domingo, also his real-life nephew, describes how he and many others see Santos: “He was the most incisive, diligent, outspoken, yet most caring, eagle-eyed mentor any performer could have. He is perhaps the most influential mentor-director of this generation of performers, from younger boomers, Generation Z, to millennials.”

Menchu Lauchengco-Yulo, now considered the leading lady of English-language musicals and a mentor of many artists in her own right, credits Santos for helping her grow as an actress. She first met him in 1978 playing his daughter in Rep’s “Fiddler on the Roof.”

Their Rep-birthed collaboration remained for years, with Santos managing Yulo’s career when she entered the TV and pop culture scenes in the late 1980s. As she remembers it, “He would train all the young ones who joined Rep. He was very patient and nurturing and helped us with the basics of theater acting and singing. Remember this was way before any workshops were available.”

Carlo Orosa, who belonged to the same performance generation as Yulo, credits Santos for helping him break out of his usual boy-next-door roles into more diverse character types, starting with the aged prophet Samuel in the 1988 Christian musical “First Name.”

“I was still so new and self-conscious, doing character roles that did not fit my age,” Orosa says. “He did not stop until I got the technique of changing my voice projection, mixed with a new posture. I made a breakthrough that night the hour before we opened. That set the course of my doing character roles in my future work as an actor.”

UK-based actor Joaquin Pedro Valdes first met the director in the early ’90s during Trumpets’ first musical staging of C.S. Lewis’ beloved fantasy novel “The Lion, the Witch, and the Wardrobe.” He said that his “Ninong Freddie’s” mentoring went well beyond theater arts and into other disciplines like voice, writing, filmmaking and painting.

“He loved teaching constantly and you never outgrew being his student. Up until the years before I left for the UK, I was working with him in some way—voice-over, a concert, a corporate gig, listening to a passion project of his and being in a new production,” says Valdes.

And there were moments when Santos challenged his young wards to think well beyond their skills—and really confront their life choices.

Philippine Legitimate Stage Artists Group Inc. (Philstage) Gawad Buhay winner Cathy Azanza-Dy shares that her naming theater as a passion was not a sufficient answer to Santos’ question as to her real aspirations. “Many years later, I realized he wanted me to know and name my North Star. And that would be the fuel for all of life’s pursuits—theater included.”

Sometimes, several of those life pursuits could be merged in an enterprise or a calling. That could be said of the aforementioned Trumpets, established in 1991 by Santos and other fellow theater artists who became evangelical Christians a few years earlier. The initial success of “First Name” and the long-running performances of the massively popular “Joseph the Dreamer” showed that there were both artists and audience for this mixture of theater arts, faith, entertainment and worship.

Playwright and longtime colleague Luna Griño-Inocian gives another reason Santos was spurred to put up the country’s first professional Christian theater company: “To present more family-friendly, values-oriented and God-focused shows where Christian actors could appear without compromising their beliefs, but still practice and grow in their craft. Freddie called it spirit-skilled theater—filled with the spirit and the message of God but done professionally. Each show would have great acting, great material, great production value—so that if and when people were turned off by it, you know it’s because of the message, not the production.”

Santos was Trumpets’ first artistic director, while close friend and fellow Rep alumnus Audie Gemora was its first president. Six years later, in 1997, the two men and other theater stalwarts would found Philstage, an umbrella organization of the leading professional theater and dance companies in the Philippines.

Gemora, the prince-turned-creative-father of Philippine musical theater and Solaire Resort’s entertainment director, said that he and Santos shared a “special bond. Like stone sharpening stone. I couldn’t stay long around him because he was consuming, yet I couldn’t stay away either. Our only conflict stemmed from him wanting me to produce something and me pushing back because I feared it would not sell.”

Gemora also had a closer vantage point when it came to Santos’ penchant of pushing artistic boundaries. “What Freddie hated was the conventional way theater was done. He was always innovating and pushing theater to new realms. Decades ago, he was already egging us to try the digital platform because he said it would reach more audiences.”

One of Santos’ more “experimental” works was 2015’s “Sabel: Love and Passion,” a Philippine Ballet Theatre production that wove dance, pop music and poetry into a seamless tribute to National Artist BenCab. Not everybody warmed up to the show, says Valdes, “but Tito Freddie didn’t care if people didn’t understand it as long as they felt it. He was so brave, relentless and exciting in his work.”

At the same time, though, as his medical condition worsened, the visionary was confident enough to pass the baton to the newer generation. Case in point was 2020’s reimagining of “Joseph the Dreamer” which had Paolo Valenciano taking over the directorial reins while reuniting Santos, Inocian and Gemora, who is now Trumpets’ artistic director, as a creative team. Santos was happy with the finished product, or at least the first act that he was able to watch; by the time curtains opened, he no longer had the physical strength needed to sit through the second act.

Still, not even five hospital confinements later could dampen Santos’ prolific creativity and prevent him from finishing a series of poems and two small-scale musicals. Two weeks before he passed away, he pitched to Gemora an idea for a new musical.

Nobody in the theater community at that point had expected his departure. His most recent accolade, Philstage’s own Natatanging Gawad Buhay for Theatre 2020, was awarded him in October.

Gemora says wistfully, “Freddie was extraordinarily multitalented. He could draw, design, write, act, sing, host, choreograph and direct. He was exceptional at everything he did. And he did everything 100 percent. I wish Freddie had lived longer because there were masterpieces he had yet to gift us.” —CONTRIBUTED