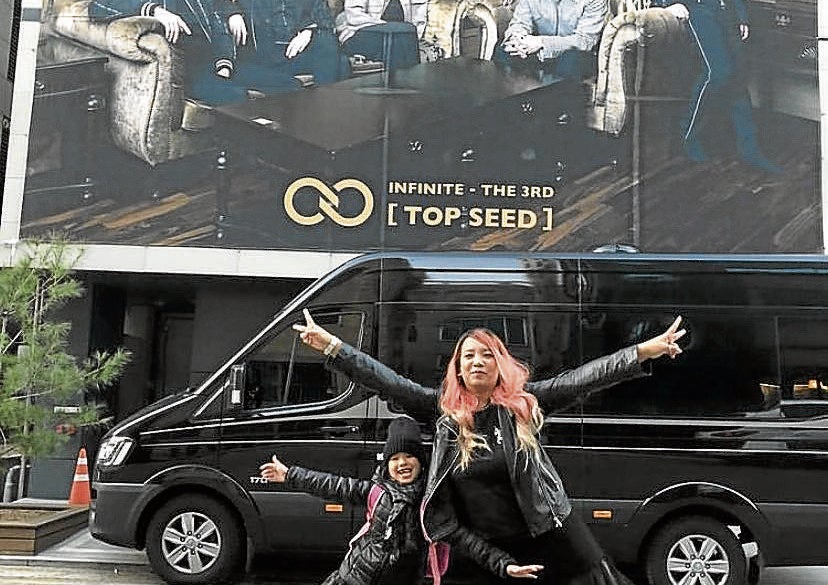 Prinsesaian Rodriguez and her daughter in Seoul

Her bias sang her ‘Happy Birthday’

Supporting a group can be very expensive. Tickets aren't cheap

This truly happened to entrepreneur Prinsesaian Rodriguez (facebook.com/prinsesaian, shopee.ph/prinsesaian). She went to the restaurant run by the family of Korean boy band Infinite’s Dongwoo. When his mother found out that it was her birthday, she called her son.

“It was a gift from his mom. He sang me ‘Happy Birthday’ and wished me well,” she said. It was the wildest thing she has ever experienced as a fan.

Rodriguez started liking Infinite in 2012 during the debut of Infinite H. H is the subunit of the group made up of Dongwoo and Hoya.

Her love for the idol continued when she saw them perform live in Manila. She found the group very talented and funny.

A K-pop fan will tell you that supporting a group can be very expensive. Whenever Dongwoo has a musical in Korea, she would watch not just one performance of her bias. She would watch them all. And the tickets are not cheap.

She would also buy multiple copies of one album because the more albums you own, the higher your chances of getting picked to join fan signs. She was able to go to all seven fan sign events when Dongwoo launched his first solo album.

“I even went to Busan. When he saw me there, he said something like, ‘Oh, you’re here, too?’ I laughed and told him, ‘Of course, because you are here!’” she said.

Besides the expenses, she said that what makes being a K-pop fan hard is the language barrier. “It’s not like they come with subtitles.”

But she said that being a fan inspired her to do better in life and work harder. Wherever she sees her idol overcome suffering and struggles, she uses it as an inspiration to soldier on with her own life.