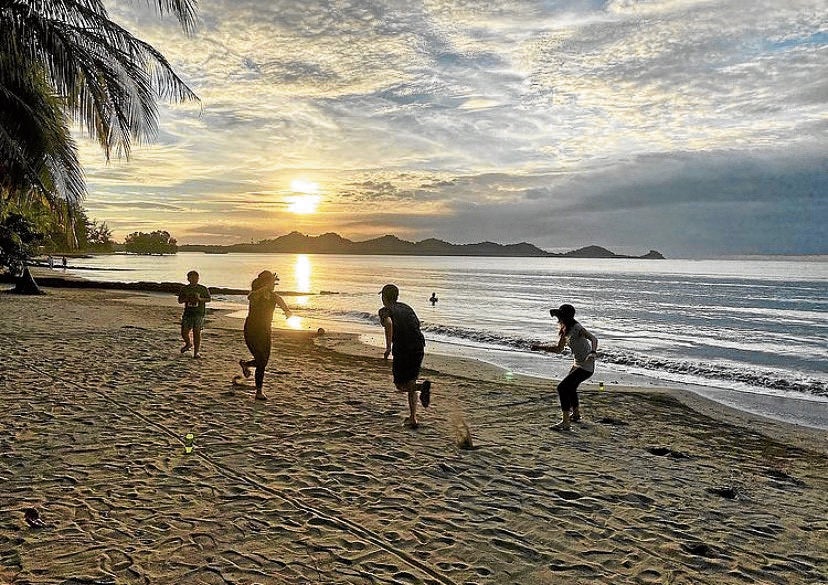 Some 65 houses line the shore of this quiet beach community in Lian, Batangas, whose appeal lies in its simplicity—and privacy

Pandemic fears and quarantine restrictions have driven urban dwellers out of city confines. The main criteria for a suitable refuge were closeness to nature and freedom of movement. Technology made remote working easier—a vital impetus to the relocation trend.

Before the lockdown, Manila’s elite would hie off to their getaway homes in Batangas and stay there for months. Thus, ensconced in Calatagan, Nasugbu, Anilao, Matabungkay, Laiya, Tali Maya or Lian, they enjoyed “self-care diversions.”

Purok Matuod is part of Barangay Binubusan in Lian, a third-class municipality. Along Matuod Beach is a 50-year-old community whose appeal lies in its simplicity and rustic charm.

Unlike other communities, the houses here are just a few meters from Talim Bay. Some 65 of them line the shore. Dwellers feel safe because the water is shallow. There is no undertow, hence, no drowning incidents.

The homeowners chose Matuod for the discretion that it guarantees. They favored tropical architecture, so that the house designs blend with the tropical environment, in contrast to stately glass-and-concrete homes in exclusive villages nearby. Matuod residents have known each other for a long time and occasionally get apprehensive when anyone with a questionable reputation inquires about acquiring a property.

“Most of them are on the country’s Who’s Who register. But while they value privacy, they’d rather not live in gated communities,” says Ramon de Vera, president of Talim Bay Conservation Society, which also serves as a homeowners’ association. “We have some rules—the most basic is to maintain silence. The properties are close to one another, but you don’t just show up at someone’s door. You are expected to give notice. Other than that, everyone is nice and ready to help their neighbors.”

(This writer’s request to photograph some of the beautiful homes was turned down, and the owners requested not to be mentioned in this article.)

The need for space and flexibility engendered by the current work-from-home business or learning mode drove De Vera and his family out of the National Capital Region. When the quarantine dates were announced, he knew that it was going to be tough for his son, who was taking postgraduate studies, and his grandchildren. Fortuitously, fiber-optic technology came to Matuod in 2019, making remote work or study seamless.

“Had we stayed in Manila, we’d be stuck at home, especially those of a certain age,” De Vera notes. “I figured that Matuod would be best for the children. They can run around here. We’ve also been gardening.”

Marianne “Maan” Hontiveros, one of the longest part-time residents, says homeowners know the families of all the farmers and fishermen in the barangay. When work needs to be done on the property, she says, they are top of mind “so that they can have extra income.” She knows that they look out for her.

“This is a very open space and one can feel vulnerable at times. It’s not impossible for strangers to wander in, so it’s good to know that you can depend on the people around you.”

Hontiveros is known as the “go-to” person in Matuod. She has been shuttling between Manila and Batangas since 1982 and knows the local ecosystem well. Her next-door neighbors—artist Xavier Roces Guerrero and Ging Pajaro, owner of Via Venetto footwear—built homes there decades ago.

Last March, Hontiveros and her siblings moved to their 2-hectare property. Broadband internet has allowed her to perform her duties as managing partner of her consultancy, CEO Advisers Inc.; president of Manila Symphony Orchestra Foundation; and vice chair of the Ballet Philippines board.

“To ride out this pandemic, you need sunlight, fresh air and exercise—which I couldn’t have if I stayed in my condo,” she says.

While other Matuod dwellers sometimes socialize over lunch or dinner, Hontiveros chooses to stay home. Though still youthful at 71, she observes strict protocols, going out only for essential errands such as grocery shopping in Nasugbu, or driving to Manila to sign papers and go to the bank.

“I always wear a PPE (personal protective equipment) suit, mask and face shield. I can’t do that if I’m socializing with the neighbors,” she says, adding that she does meet them virtually.

Hontiveros has long advocated environment protection. She would pick up trash during her walks and neighbors have been following her example. In the cold months, they all look forward to releasing turtle hatchlings to the sea, she says. “People are cognizant that Matuod is a sanctuary.”

Her Matuod lifestyle seems idyllic. Upon arising, she drinks tea at her herb and vegetable garden and watches the hornbills that drop by. A free day is filled with journal writing, watching Netflix and swimming in the bay or doing laps in her pool. After the last meal at sunset, she chats with friends and family online or reads and plays the guitar, and meditates.

After being stuck in the city during the lockdown, entrepreneur and civic leader Kaye Tiñga and her husband, Sigfrido or Freddie, fled to Matuod last June. The family would spend five to seven days here and then drive back to the city.

Toward the end of July, Tiñga’s assistant in Manila was hospitalized for COVID-19. Back in Matuod, the helpers started coughing. Alarmed, she had the whole household take swab tests. “While my staff was exhibiting symptoms, the hospitals would not take in new patients,” she recalls. “I became anxious.”

The test results came back negative, but the family went on self-quarantine for three weeks. They ran out of food at one point and she wouldn’t send anyone to the market. Just in time, a neighbor with a backyard poultry farm sold them eggs. Some fishermen brought them fresh catch, and they got fresh clams from a nearby stall.

“We slimmed down because of that very basic diet,” recalls Tiñga. “There were no sweets or junk food in the house.”

Best of all, Matuod brought her relief from COVID anxiety. “I was starting to imagine that I had been infected,” she says. “During ECQ (enhanced community quarantine), one couldn’t go out to exercise. I saw only the living and dining rooms in our Manila residence. Here, I could really breathe, and take walks in the garden and along the beach. That helped me mentally and spiritually. I always thought I was a city person. Staying here longer than usual made me see that it was more fun than I previously thought. My kids could play football, baseball, walk and run around.”

Aurora Diaz Wilson is living it up. Last March, she was not even aware of the lockdown. Her sister, Ruby Roa, was concerned that she was cooped up in her condo unit. Wilson has orbital myositis, an inflammation of the eye muscles. Medicines were making her sister weak, Roa says.

Wilson was told that she would be brought to Roa’s house in Matuod to keep restaurateur Jim Fuentebella and his wife Mavis company. Wilson’s daughter, former model Georgina Wilson-Burnand, had earlier arranged for the couple’s stay.

“I thought I was going only for the weekend,” Wilson says. Her children urged her to stay for the entire lockdown, so she has been here for months now, enjoying a balance of company and solitude.

“I brought a bathing suit and a smile,” she says. “I have met some very sexy people, like newscasters, and movie stars and their paramours.”

She sends messages to friends and family in Manila during her quiet time, waxing romantic about the phases of the sun, moon and the tide—and even about encounters with crabs. “People are saying they like me better now,” says Wilson. “Matuod is a place where you can figure things out.”

The Matuod lifestyle does seem perfect. Residents wake up to the sight of white-capped waves. Between webinars and virtual meetings, they can read in silence or take luxurious siestas. Sharing photos of the sunset is also a favored pastime.

According to De Vera, the rates of COVID infections and deaths are very low in Lian and, in fact, Matuod Beach has remained COVID-free. Extraneous issues such as loud karaoke gatherings have been resolved at the barangay level.

“I’d rather not romanticize Matuod as paradise. It’s not been very good for the locals,” she says. “Before COVID, there were many vendors who peddled vegetables and fresh fish. Now there are but a few—or maybe they do not have enough to sell. It’s been tough for the poor. We can drive around in our cars, but public transportation is limited. I have a banca for my scuba diving that I would loan to the Br. Alfred Shields FSC Marine Station (run by De La Salle University for marine biology students). The two boat operators had steady income from La Salle and myself. But there’s no one who can dive with me now. I can’t go by myself and there are no students coming so they don’t have that kind of income anymore. Matuod could be heaven for those who have the means but what about those who don’t?”

Retiree Marilyn Matute used to gather children of the fisherfolk for supplemental education. She would take them snorkeling, but also for small cleanup activities. She has had to stop this during the pandemic. Last December, she rallied the homeowners to donate funds for Christmas gift packages to be distributed to the underprivileged.

Social work is second nature to Tiñga. Before COVID, she was one of the key people in the Red Charity Gala, an annual charity fundraising event. Last November, she and some neighbors distributed food and relief goods to typhoon victims in Barangay Binubusan. Her family likewise provided supplies for the pupils of Binubusan Elementary School.

In Manila, Tiñga points out, there are more people who can help this way, but not in Lian. “I feel that this is the best way to prove we are a real part of this community.” —CONTRIBUTED INQ