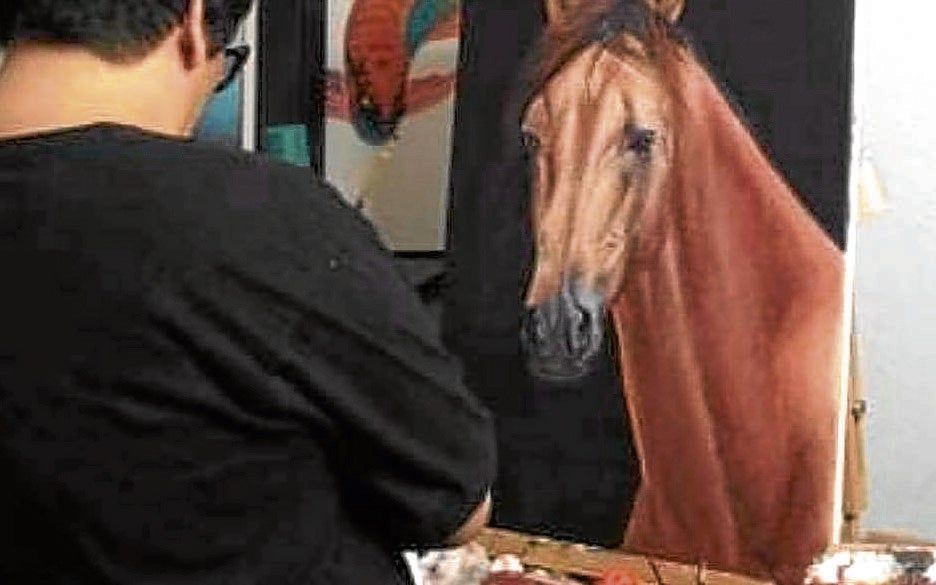 Santiago puts the finishing touches on his horse painting, “Golden Andalusian,” that was sold to Dr. Vicki Belo.

Grieving a loss, Cary Santiago picks up his brush again

'It was for my mental health... When I paint, I’m able to forget'

Designer Cary Santiago is known for his laser-cut, perforated and intricately designed evening gowns that are one-of-a-kind. The Cebu-based designer made a name for himself in the Middle East before returning to the Philippines, where he was welcomed by Manila’s and Cebu’s most stylish women.

Every month, he used to produce at least two bridal gowns and assorted evening wear for regular clients, but the pandemic effectively put a halt to his bustling business. Last March, he shut down his atelier and hunkered down at home.

Like many of us, Santiago used social media to keep in touch with friends and family. Travel restrictions meant that the only vacation photos one could post were “throwbacks.” Six months into lockdown, he rediscovered his passion for painting but only began posting new “content”—mainly progress made in applying brushstrokes on canvas—in October.

“I’ve always painted or done elaborate sketches,” Santiago told Lifestyle in a phone interview from his home in Cebu this week. In between pauses, where he instructed his helper on what to prepare for dinner that evening, we could hear birds in his garden, calling in the distance.

“My mother was a costurera (sewer) and when I was in my early teens, she would ask me to copy photos from catalogs and magazines. That’s how I learned how to sketch,” he said.

In high school, Santiago dabbled in makeup application and would come up with new colors by combining two or three shades of makeup. When he and other people discovered his talent for designing clothes a few years later, he stopped painting altogether.

“Nobody was buying my paintings. They were not beautiful because at the time, it was difficult to get access to materials; those that were available were just too expensive. I became a fashion designer eventually. I was hired and was getting paid right away, so I stopped painting for a long time.”

The strict lockdowns in Cebu last year, however, allowed him to slowly get back into painting. The solitude also allowed him to grieve the recent death of his best friend.

When he paints, Santiago prefers listening to melancholy French songs even if he admits that he doesn’t speak any French. The emotion of the singer steadies him and helps propel him to complete a painting in three days.

In three months, he was able to finish a total of 10 paintings, including some featuring brightly colored birds, a couple of horses, a sea turtle and an arowana. “I chose these subjects because I love the elements of air, earth and water,” he said.

Santiago applies the same keen and artistic eye he uses when he designs to the way he paints. Instead of situating his subjects in nature, he prefers to let them stand out with a neutral background.

“I have always been fascinated with anything that is flying, running or swimming. I’m fascinated with movement, but I make sure that my subjects are composed and are looking at me.”

All 10 paintings have since been bought by clients and collectors including Dr. Vicki Belo, Mariquita Yeung and Bea Zobel de Ayala for prices ranging from P25,000 to P150,000. On Wednesday, he posted that over three dozen new orders for paintings have come in.

In an earlier interview, Santiago pointed out the importance of saving up for a rainy day, but said that when he began painting again, he did so without intending to profit from it.

“It was really for my mental health. My best friend died. There were people I loved that I wanted to see but could not. When I paint, I’m able to forget. Listening to the French songs makes me more creative; I think that when you paint you have to be emotional.”

There have been requests for portraits, but Santiago is not keen on the subject. “I’m a perfectionist and I can easily spot mistakes in portraits, like with clothes. But with animals you can change their colors, shorten their hair. For example, I can alter the color of a bird’s feathers, where instead of blue I can make it a bit violet.”

He has begun accepting dress orders from returning clients but said he has no intention of stopping painting. In fact, next week he is launching two new services focusing on office uniforms and ready-to-wear dresses that will free up time so he can continue painting.

“I will keep a few ‘madams’ (a term of endearment he uses for longtime clients), maybe 10 from Manila and 10 from Cebu who I will do made-to-measure for, but the rest of the business will be uniforms and ready-to-wear.”

His paintings may be based on pictures taken by photographers, but as soon as it’s safe to venture outside, Santiago plans to take his own photos of his beloved fauna. He’s also considering doing paintings of exotic plants and flowers after a client requested one of tropical plants.

“I won’t be doing common plants like gumamela. Instead I might paint phalaenopsis orchids. They’re my favorite.”