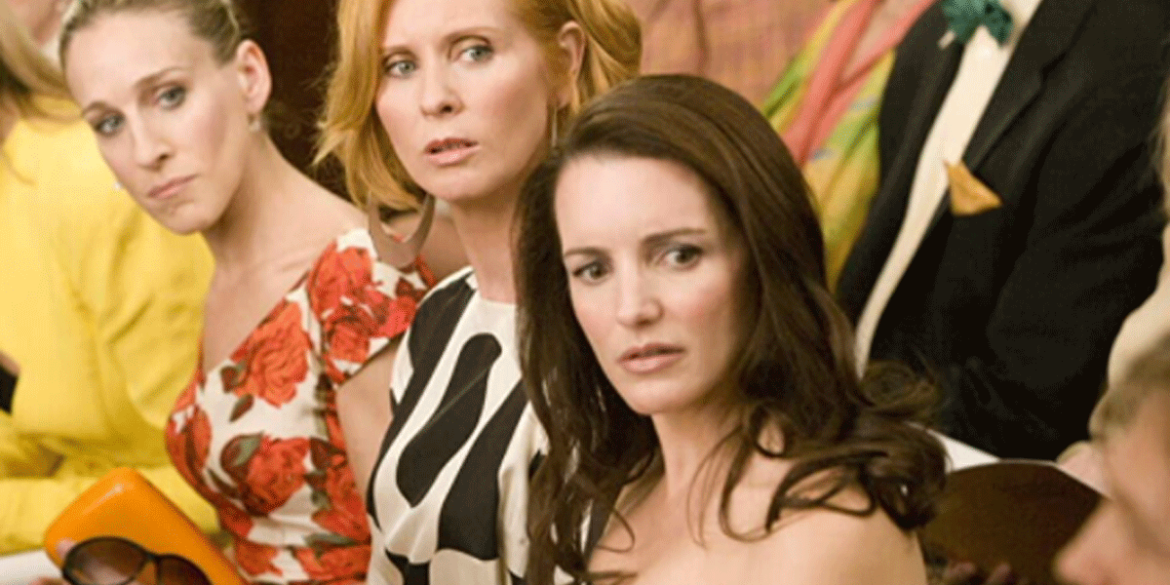 Some things are better left untouched. Like Demi Moore’s cheekbones, votes cast for Joe Biden, and Sex and the City.

The series itself, which lasted six seasons, was so refreshingly frank and sassy when it first dropped on our TV screens over 20 years ago, offering up the quintessential New York City dream: great girlfriends, a dating scene littered with hotties, brunch every weekend, and a killer wardrobe. And a life full of fabulous possibilities washed down with Cosmopolitans and champagne.

It may have been fluff, but it had moments of sheer hilarity, a fair amount of substance, and a whole lot of heart.  Forget for a moment that despite the “I Am Woman Hear Me Roar” stance of the female fab four, in the end, the series capitulated to the myth that all Carrie, Samantha, Charlotte, and Miranda wanted—and needed—was a man to make them feel complete.  Forget for a moment, too, the sheer incongruousness of the four women actually being friends in real life: Would their paths really have crossed, and would their casual acquaintance ever have truly translated to the deep friendship they shared onscreen?  Focus instead on how the show advocated for sex without judgment, friendship without judgment, and, let’s be honest, fashion without judgment.

And the most non-judgmental of all the four ladies?  Samantha Jones, of course, indelibly portrayed by Kim Cattrall.  Yes, we were all rooting for Carrie, and Big, whose epic romance at one point was likened to Robert Redford’s Hubbell and Barbra Streisand’s Katie in The Way We Were—improbable, fantastical, but meant to be.  Others, of course, we’re rooting for Carrie and the anti-Big, Aidan. I don’t know anyone who actually rooted for Carrie and Aleksandr Petrovsky, played by Mikhail Baryshnikov. But deep down, we all admired Samantha for her pluck, sometimes for her brazenness, but always for her authenticity.  The exaggerated padded shoulders, however, we could have done without.

At the end of the series, as everyone knows, Big flies off to Paris to bring Carrie back, and we presume that they live happily ever after in the Upper East Side.  We also learn that Big’s real name was the rather prosaic John. Quite unsexy, that.

And so the end should have been the end.

But there was such a clamor for a sequel that a movie was made four years after the season finale.

I noted then in my once upon a time blog in 2008, upon seeing the movie in a Johannesburg cinema:

It was Girls Night Out everywhere around the world last night. And there was a run on Cosmopolitans as well. After watching Sex and the City on opening night like all good card-carrying thirty—and forty-something women and gay men, we headed for the nearest bar and ordered what else but Cosmopolitans. Our rotund waiter was clueless as to why the dark pink drinks were unusually popular last night. And so began, drink in hand, a post-mortem on Sex and the City, the most hyped, most publicized, most fashionably self-conscious, and most self-consciously fashionable movie of the year.

I thought the movie wasn’t as awful as some reviews have painted it out to be.  While the clothes were often over-the-top and hideously accessorized, the issues raised in the film were pretty realistic and relevant.

That movie should really have been the end of the SATC franchise.  But no, fans everywhere were begging for a sequel to the sequel.

And so, in 2010, the movie Sex and the City 2 was unleashed upon its legion of SATC fans, and it was a shockingly bad film, pretentious, patronizing, vapid, and irredeemably inane. I was in Cape Town the weekend it opened, visiting my best friend Caroline, and we emerged from the cinema quite unable to process what we’d just seen. We just looked at each other, shaking our heads and wondering who had actually approved this movie for release.

Apart from the catastrophic costume design, not to mention the lack of cultural sensitivity and the sheer and cynical arrogance that fans would lap it all up, the depiction of Abu Dhabi as some kind of paradise where four worldly Western women would want to jet off to for a female bonding jaunt was too improbable. If they were the whip-smart New Yorkers they were supposed to be; they would have certainly been aware that the Gulf emirate was not exactly a democracy. Neither was it a hedonist’s—much less a sexually adventurous woman’s—idea of a holiday destination. Poor Samantha with those horrible spiky shoulder-padded outfits she was put in. Not that the wardrobes of the other three ladies were any better.

So forgive me if I can’t muster any enthusiasm for the SATC reboot. A SATC reunion without Samantha? She was the most interesting and complex character in the franchise! Don’t get me wrong; escapism is not a bad thing, and as we go into year two of the pandemic, we all could certainly do with a bit of escapism. But do it well, the way Bridgerton does.  Steamy, suggestive, with spectacular costumes and sumptuous set designs.  Now that’s escapism with the right balance of sophistication and sex.  And don’t get me started on the accents…