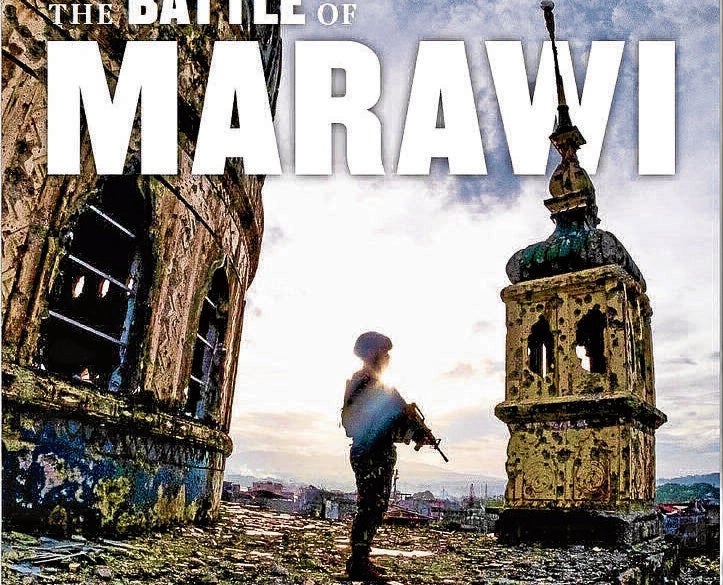 The cover of “The Battle of Marawi”

A book that will not let you sleep soundly at night

Criselda Yabes’ ‘The Battle of Marawi’ recounts what hell war is, how quickly it can escalate from a single mission to a full conflagration that can burn for months

It isn’t often that Filipinos get access to long-form journalism—the kind that is bound in a book. It is even rarer to have long-form literary journalism that puts together the pieces of a city shattered by air strikes, artillery and many hails of bullets.

This rare thing, painful as its contents may be, is what journalist Criselda Yabes offers in her book, “The Battle of Marawi” (Pawikan Press, 2020).

Off the bat, Yabes is honest with her readers about her story sources. She is also clear about using pseudonyms for the soldiers she interviewed. That the identities of the people interviewed and quoted in such stories are hidden in the arcana of substitute pronouns does not detract from the details given.

This is not a book that will let you sleep soundly at night. It accomplishes what good reportage should accomplish: It comforts the afflicted, and afflicts the comfortable.

Do not open this book and expect to come out unscathed, but read it precisely because the people have the right to know at least some of what transpired in the Islamic City of Marawi, beyond the human drama and the politics. Over 2,000 people lost their lives, a city still lies in ruins, almost four years after more than five months of intense battle in Mindanao, that most lovely of powder kegs. It would be unseemly to close one’s eyes and wish away what cannot be resolved by wishes.

You will read the stories of battle as told to Yabes, of what was lacking on the ground, and of what use the soldiers in the conflict area made of the resources at hand. You will read the stories that came of her interviews with some of the civilians rescued as the battle raged. In the pages of this book sits the tally of fallen soldiers, and how they fell, listed in cool black and white, and the unsentimental telling of a news story underscores all the emotions it does not state.

Beyond that, there is keen social commentary that cleaves faithfully to the journalist’s observations Yabes makes—yet she leaves the conclusions up to the reader to make.

“I interviewed about 80 officers, mainly unit commanders and other sources over this period of roughly 18 months,” Yabes wrote in her author’s note. “All interviews were jotted down by hand, filling the pages of 18 Muji notebooks, and became the essence of this book: All the information came from primary sources.”

The interviews, she said, spanned a minimum duration of an hour and a half, all the way to 12 hours.

Yabes was also straightforward about “reconstructing the events from the best of their recollections and cross-checking each of their accounts.” “The Battle of Marawi,” as the decimation of that city is now called, precluded the embedding of journalists with military units going into the main battle zone.

“If I had been allowed into the battle area itself, I would have known which units I would have liked to be embedded with,” Yabes writes. “The critical fights took place by the bridges over the Agus river, the neighborhood of Lilod, the Dansalan College, the Bato Mosque and its surrounding Padian market, and the last holdout of Old Markaz by the lake they called Ten-Ten.”

Marawi the colorful, a city of flourishing trade, beautiful architecture and masterfully crafted works of art, was leveled, its residents scattered as internally displaced refugees, bakwit—and not just by battle between the government and the forces of the Maute Group and the Abu Sayyaf.

In Yabes’ words: “In the end I heard some Maranaos say it was their tiyuba, a karmic result of the wrongdoings of the city that had caught up with them—political corruption, underground trade of drugs and guns, the spread of criminal syndicates.”

This book is literary journalism, true, and it is put together from Yabes’ interviews of mainly military personnel who had been there where journalists were not allowed to go, and so she takes what information she was given with a grain of salt without losing any of the clarity, depth of emotion, or intensity of the events that unfolded within the battle zone.

Kudos to Yabes, there was no “polishing” of the stories she’d gleaned and laid down in black and white. Yet she takes us into the experiences and memories of the people she had sat down with for interviews across a year and a half, using her spare and straightforward third-person storytelling with the same devastating effect as an assault on the sensibilities.

In literary journalism, adjectives are spare, though the writer of such stories makes use of literary elements like juxtaposition and story pacing to draw the tension needed to keep the reader turning pages from beginning to end. There is no naming of heroes in the war stories a journalist tells—only a telling of how things unfolded, in retrospect, with much fact-checking, if a firsthand account is not possible.

Yabes succeeds here quite masterfully, and her storytelling gives you no more and no less than she herself gathered—including her impressions during the interviews. This is a book that deliberately mutes the drama of the author’s imagination so that the reader may have room to think, to put their imaginations to use visualizing what she has to say.

This book carries empathy that does not overwhelm, and with the author firmly positioned as narrator. In it are the stories gleaned by skillful interviews with sometimes reluctant subjects, or people who are still living with the trauma of war.

Don’t think “The Battle of Marawi” is a dispassionate piece of reportage. It is not. A well-written piece of reportage, this book stirs your emotions and brings you to the table with her interview subjects, who recount what hell war is, and how quickly it can escalate from a single mission to a full conflagration that can burn for months.

They say journalism is history in a hurry. I prefer to think of it as chronicling historic events on a deadline—and Yabes managed to balance both straight reportage and analysis after the shoe-leather reportage in a manner that will reach the widest possible audience. Her simplicity of style coupled with her deftness at merging 18 months’ worth of interviews and data vetting delivers a powerful book that, like all reportage, seeks to catalyze action and change.

This is a book to keep on the shelf for everyone to read—because history and reportage are as vital to building a better nation as good governance and national security are. May Yabes’ pen not tire of writing such books, for, surely, the Philippines needs more of it. —CONTRIBUTED