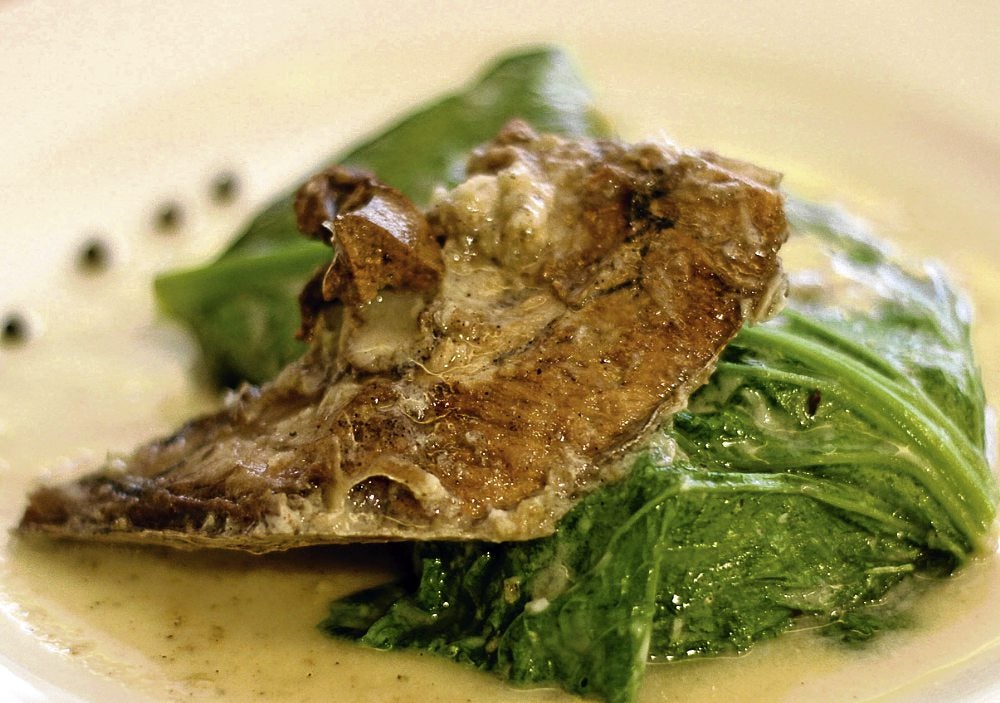 Albert Alavera likes his adobo simple and with only the nourishing goodness of seafood and vegetables.

His “Adobong Tuna sa Puti” speaks well of his penchant for a healthy dish that’s devoid of color, but richly flavored with coconut milk. The fish, Yellow Fin Tuna, is fused with cane vinegar, spiced only with garlic, pepper, bay leaf, salt and sugar.

“It’s still the traditional adobo we love to cook, minus the meat and soy sauce,” says Alavera.

The soy sauce’s saline taste is absent in this dish. Instead, coconut milk lends it a tempered piquancy. The fish, however, doesn’t get drowned out in the flavors. In fact, the tuna tastes even better with the white sauce. The slow cooking also gives the dish a flavor-packed tenderness.

“You can substitute the tuna with cream dory or lapu-lapu,” says Alavera, a seasoned cook who now acts as managing director for the Specialty Restaurants Group that operates Burgoo, Gumbo, and Eat and Go restaurants.

For a healthier touch, Alavera wraps the tuna individually in mustasa (mustard leaves) before simmering it in the thick sauce.

The mustasa adds a nice crunch to each bite and gives the dish depth and a more rounded flavor.

Alavera says the mustasa can be substituted with gabi leaves. A few slices of siling labuyo give the palate an additional kick.

Alavera has been whipping up Adobong Tuna sa Puti for more than 10 years now—the result of experimentation in the kitchen after he got tired of the usual dark chicken-pork adobo with runny sauce.

“I always cook this dish whenever I am in Zambales because the yellow fin tuna is very fresh,” says Alavera, who has a rest house in Botolan Point Beach in Zambales.

He usually buys one whole big tuna and slices it into pieces.

“There’s no need to marinate the fish,” says Alavera. “It’s quick and easy cooking. You let the fish simmer until the liquid is reduced to half.”

He pairs his tuna adobo with lumpiang hubad (spring roll without the wrapper).

Alavera began cooking as a young boy who was always curious about food. He grew up in Samar, Leyte, with his aunt who used to run a carinderia. The food stall became his playground and culinary school.

“I was exposed to my aunt’s cooking, and I would help her cook and sell the food wrapped in banana leaves,” he says.

Though he finished business administration at the University of the East, his passion for good food never left him.

“My first job was already in a restaurant,” Alavera says.

He started to work at Pizza Hut as a dishwasher and rose from the ranks. He left the company 11 years later as vice president for operations.

He also took up international culinary and restaurant management courses (Florida, New Orleans, London, Singapore) to enrich his knowledge in the kitchen.

Combine water and vinegar in deep pan and bring to a boil. Add the remaining ingredients except for the coconut milk. Simmer when liquid reduced to half. Put the coconut milk last. Serve hot.