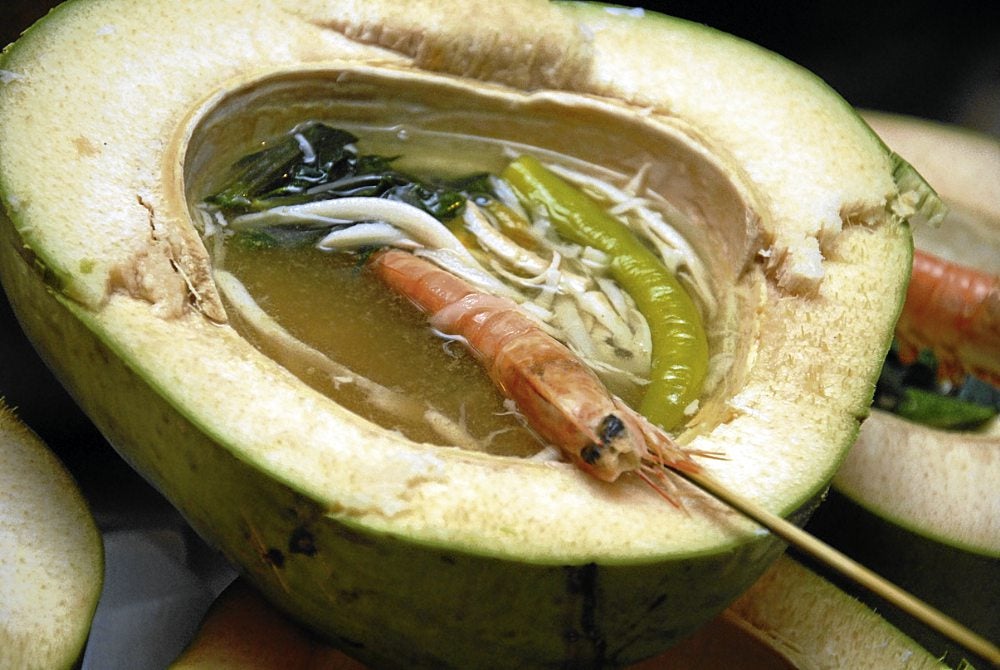 By going nuts with coconuts, Decal means savoring the native fruit and exploring  ways of incorporating it in the daily meal.

In southern Luzon, coconuts abound. Most, if not all, households, especially in Quezon, incorporate coconut (meat or  juice) in their food. For instance, the adobo is cooked with buko strips that give the stewed meat a splash of sweetness and mellowed flavor. Sinigang has coconut water and tamarind that give a refreshing sweet-sour essence.

The kakanin, like nilupak, are all made with coconut milk.

Unlike Bicol, a region known for mixing gata (coconut milk) with  its spicy cuisine, Quezon has minimal spice, which makes it more appealing to Manileños. Heritage recipes are not too fancy—none of the dishes are fiesta fare. Rather, dishes are everyday food—simple and straightforward.

“Quezon has one of the most unique dishes that combine well-loved and traditional Filipino flavors, making them more exciting for diners,” says Decal.

Quezon is beginning to make a buzz among foodies and travelers.

“Laguna and Quezon are so near  Manila and yet you seldom hear about these provinces,” says Decal. “People go to us only in summer for Pahiyas. We are more than that. The food, culture and traditions  we keep are worth discovering.”

Kulinarya Tagala used to be Kulinarya Quezon showcasing only Tiaong, Sariaya, Tayabas and Lucban in Quezon. In 2005 the Department of Tourism came out with Kulinarya Filipina, a food tour around the country. Then Kulinarya Quezon and another group organizing food trips in Laguna, called Viaje del Sol led by Patis Tesoro, merged to further boost the southern Tagalog region.

“Women from southern Tagalog are called tagalas,” says Decal. “And, most women are in the kitchen.”

“We’ve partnered with Kulinarya to help promote regional cuisine,” says Maricel Manalo, San Miguel Food Group culinary services manager. “It’s our way of giving back and supporting our country through food and culture. If you’re a foodie, you’d enjoy the beauty and mystery of our local cuisine.”

Kulinarya Tagala—which can be a day trip, overnight and three days-two nights—has dishes enjoyed in Laguna and Quezon not usually served in  Manila restaurants.

First stop is Patis Tito Garden Café in San Pablo City in Laguna for a hearty breakfast. Patis, a leading fashion designer, has been running her restaurant for some time, serving typical Filipino breakfast in  her beautiful, lush garden.

The place has the ambiance of an old provincial home with capiz windows, wooden floors and tables and chairs made of hardwood.

A demonstration of a local favorite, Pancit Buko, is an added attraction. The “noodles,” made of buko strips, are simply sautéed with fresh veggies.

Sariaya, Quezon, is about 130 km from Manila—a quaint municipality at the foot of the mystical Mt. Banahaw.

Sariaya has many ancestral homes built in late 1800 and early 1900.

A unique experience dining in an ancestral house is part of Kulinarya food trip. Here, guests must don period costumes before enjoying lunch at Villa Sariaya, formerly known as the Rodriguez House and one of the biggest bahay-na-bato in the province.

The lunch spread is prepared by Ma. Carmen “Chuchay” Marasigan, owner of Luisa and Daughter, a 23-year-old restaurant in Lucena.

In Quezon, pinais is always wrapped in a leaf. The alimasag, wrapped in a special leaf called kamamba (found only in the foothills of Mt. Banahaw), is wrapped again in banana leaf. It becomes more flavorful as it is cooked in buko water.

Beef Minanok is an ordinary fare in Quezon that tastes like chicken tinola but using beef. Instead of sili leaves, blanched mustasa is added last.

A dessert of Caramel Gulaman and Bukayo completes the deal.

In Tayabas, the old capital of Quezon, the original Haing Quezon can be had.

The sinigang is served in coconut shell, side by side with Delino Chicken, which is a cross between tinola and sinigang. The chicken is stuffed with spices, herbs, malagkit rice and sausage before being submerged in hot broth. The soup is light and refreshing. The chicken meat is absolutely divine, being so tender and moist.

The Minalutong Kanin is made more flavorful as it is topped with sweet potato before being wrapped in banana leaves.

Capping the meal is Coconut Cream Puff, Pilipit (made of squash) and fresh fruits. Budin, a pudding made of cassava, is not to be missed as it is creamier with the use of Star margarine and coconut milk.

“Tagayan ritual is a dying culture,” says Decal. “We’re trying to revive this dying culture which makes Quezon very unique. Tagayan is a discovery of Filipino’s gentle race. We were so gentle as drinkers but we’ve forgotten how to do it the right way.”

Drinking lambanog is part of the ritual and is a special way of welcoming guests.

“We always use the lambanog, especially during special occasions, like pamanhikan, weddings or birthdays,” Decal says. “A tagay (a shot of liquor) of lambanog is passed around and offered guests.”

Pottery artist Augusto “Ugu” Bigyan is a renowned potter who loves to cook. He was born and raised in Tiaong.

In his restaurant, you dine on his crafted flatware and relish his Ginataang Hipon, Fish Escabeche in Mango Sauce, Tahong with Mustasa, Pork Sparerins, Pako Salad, Kulawo and Calamares.

Ugu has been lauded for making sure the dishes coming out from the kitchen look like works of art.

Ugu’s restaurant surrounded with lush greenery and charming kubo (15 of them) adds to the gastronomical adventure. The air is light and breezy with the soothing pipe-in music.

An important dish in the house is Ensaladang Pako, fiddlehead ferns with mixed greens and fruits drizzled with kalamansi juice, fish sauce and sugar.  This is a perfect marriage of spinach, mangoes and other mixed greens that usually set the tone for some hearty dining ahead.

The pako is blanched, tossed with finely chopped red onions, then topped with a few slices of itlog na maalat.

Another favorite is Kulawo, a humble dish of banana heart (others use eggplant) with coconut milk dressing. The grated coconut is cooked in charcoal which adds a unique smoky flavor to the dish. Kulawo is topped with edible Ternate flower.