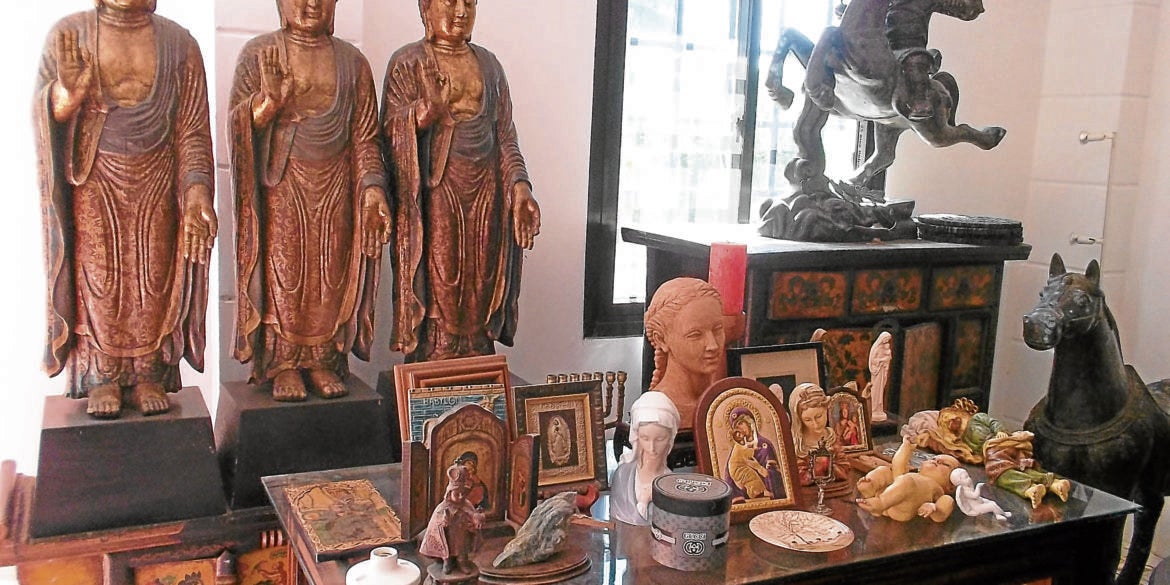 A cultural hideaway in Bongabon

The progressive, little town of Bongabon in Nueva Ecija lies at the foothills of the mighty Sierra Madre ranges. And tucked away in its suburbs, amid lush foliage, is Giron Botanique, a complex which includes a small museum, art gallery, botanical garden and nursery.

A stream runs through the greenery. In the garden, surrounded by potted plants in bloom, is a marble Buddha from Myanmar, a neighboring country now in the headlines. And just a few steps away, in the open-air dining room, is a big representation of the Crucified Lord.

Two Persian cats lord it over the premises. And they are not shy about demanding food—namely, the heads of fish being served to guests who happen to be dining. The area is filled with palm, bamboo and fruit-bearing trees, as well as and plants and herbs.

Some distance away, but still part of Giron Botanique, is The Stone House, an inn with three luxurious rooms, a common area and kitchen. It is not, however, accepting paying guests at the moment because of the pandemic.

Giron graduated with a degree in pharmacy from the University of Santo Tomas, but then decided his heart was really in interior design, and so he shifted his attention to the Philippine School of Interior Design. With the studies over, he worked for a garment company, designed gowns and did a project for the late director Tony Mabesa.

Then it was on to New York, the Big Apple, where he stayed for three years, doing gowns for a Korean American designer.

“My ex used to be a young Broadway producer so I had access to the theater,” he recalled. He saw hit shows. And he’s a fan of Cole Porter.

A native son, however, has to return home. And Giron, after gallivanting here and there, returned to Bongabon and busied himself with cultural matters and creative projects. The local government took notice of him.

He became vice chair of the Nueva Ecija Council for History, Culture and the Arts, representing the private sector. He established links with the National Commission for Culture and the Arts (NCCA) and the National Historical Commission, commuting between Manila and Bongabon, which lies north of the cities of Cabanatuan and the capital of Palayan.

Inspired by his hometown, as he put it, Giron created in his bailiwick the Museo ng Kultura ng Pagsisibuyas. The reference to onions may seem odd, but Bongabon is really “the Onion Capital of the Philippines.” In fact, he created the town’s Onion Festival, which was held every year until the pandemic struck. The museum was dedicated to the memory of his parents, Faustino and Eufrocina Giron.

“Tessie Luz of the Luz Gallery was my client,” he says. “And I had an association with lots of artists.”

Gallery A is situated right next to the museum.

“We don’t have galleries here,” he says. “So whenever I do one-man shows, I tie them up with a hotel in Cabanatuan.”

A recent event was “Katutubo,” a one-woman show by Pamela Gotangco, a Zurich-based artist who hails from Rizal, Nueva Ecija. Her exhibit was a tribute to woman power in the form of indigenous women caparisoned in their tribal costumes, fashion accessories, headdresses, bright necklaces and bracelets. Some of these paintings may be viewed at the museum and gallery.

Gotangco has had solo and group shows in Switzerland, and digital displays of her work in such venues as Times Square in New York and Saatchi Gallery in London. She was recently adjudged one of the 100 Most Influential Filipinas by the Filipina Women’s Network.

Turning to a motto or a view of life which motivates him and keeps him going, Giron, 66, cites these words from retired fashion designer Danny de la Cuesta: “Life should be like fashion, fashioning things, not just be like creating clothes, but venturing into art, botanical gardening, Philippine antiquity and many more.”

And he gushed: “What a life, enjoyable. It’s the best time of my life. “There’s more to accomplish, and more to learn.” —CONTRIBUTED